Reading by the Book 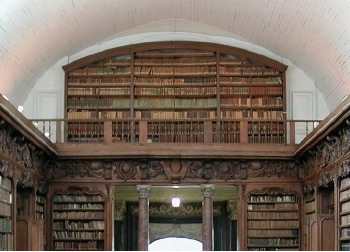 There is in Durante’s song an attitude towards reading that reflects the attitude of many today, especially those who are in the process of receiving an education. The song is from the 1940’s, as near as I can tell, which suggests that unfriendly attitudes towards books and reading is not a new thing. Mark Twain in his definition of a classic (“A classic is something that everybody wants to have read and nobody wants to read”) captured a similar sentiment.

A book published last year, How to Talk About Books You Haven’t Read by Pierre Bayard takes this idea a step further by instructing us how to sound knowledgeable about books we have not only not read but have no real desire to read, while also recognizing that there is an image that attaches to a well read person that many who are not well read would like to project. Andre Agassi sold tennis shoes by telling us, “image is everything”, though he probably did not say it first. And he cultivated the image of a champion long before he became successful at actually winning major tournaments. So why is it that so many people do not want to read but want the circles in which they move to think they do? 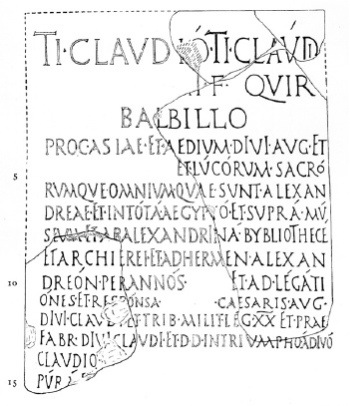 Inscription regarding Tiberius Claudius Babillus of Rome (d. 56 CE) which confirms that the Library of Alexandria must have existed in some form in the first century AD.”Forschungen in Ephesos”, Vol. III, Vienna 1923, p.128.
http://en.wikipedia.org/wiki/File:Alexandria_Library_Inscription.jpg

This inscription from the first century makes a reference to the ancient Library at Alexandria. It was destroyed on three separate occasions and on all but the last occasion rebuilt. It is said to be the first library that aspired to assemble a serious collection of books and actively sought out books from all parts of the then known world. To this day most communities in America recognize the importance of having a town library, though the library is often one of the first institutions to lose funding when the economy becomes troublesome.

I live a few miles from one of the oldest libraries in the country, The Boston Public Library. It is an impressive place to visit. It is not just a collection of books, but of sculpture and painting as well. There is a collection of murals by John Singer Sargent that have recently been restored among other exhibits in the library that attest to its value as more than a book depository. The New York City Public Library has a cottage industry of sorts accumulating lists of facts and information contained in its collection and publishing them in books under their imprimatur.

If the culture seems to care so little for books why does it go to such lengths to accumulate them and make them available to people, especially if people do not want to read them? Is it just so people can sound credible when they claim to have read a book they have never owned? I think that in spite of what some people say, including many students who do not seem to be personally interested in books, there is a belief that books are important to a culture and that someone should read them. Samuel Goldwyn once said “I read part of it all the way through.” And the parts that he read were turned into some impressive films. I think perhaps this attitude pervades aspects of the culture, that for many it is enough to have read a page or two to get the flavor of a book, they are just not hungry enough for the complete meal.

Part of the blame for this is probably public education that requires everyone to get an education whether they want it or not. Not everyone aspires to be literate, though I believe in the mission of the public schools that encourages everyone to be literate and that the process converts many. But if public schools too rigorously maintain a high academic standard those without academic aspirations will be lost. But to fail to maintain a standard trivializes the whole enterprise. A middle ground of sorts needs to be found that preserves a meaningful standard while providing a path through the process for those that are not interested in the standard. Ideally those that lack interest would be won over, but I am not sure that is possible to win over everyone. It seems that at the heart of the public schools is this compromise between standards and student interest and how far the compromise can go before the diplomas the nation’s schools award lose their value.

There was a discussion this week in a social network for English teachers English Companion. The name of the discussion was “The Difference Between Good Literature and Books We Like to Read.” I cannot link to the actual discussion because you have to be a member to gain access, but do feel free to join and check it out. The gist of the discussion focused on what books should form the curriculum and whether there is a place in the curriculum for the books students like. I do not think students need a whole lot of instruction on the books they already like and in my experience it is as much the analysis of a text that students resist as the books themselves and if I were to introduce more current and popular fiction I would probably be criticized for analyzing it to death, which I am sure I would do because as an English teacher I love analyzing texts to death. 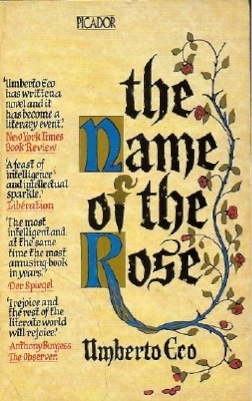 The cover art of the novel The Name of the Rose.http://en.wikipedia.org/wiki/File:The_Name_of_the_Rose.jpg

A book about books that I thoroughly loved when it came out about ten or so years ago was The Name of the Rose. It combined a love of books, with a medieval setting and a good detective story. Who could ask for more? Even the detective in the story evoked Sherlock Holmes, one of my favorite detectives. But what I thoroughly enjoyed was the labyrinthine library with its vast collection of books, including one by Aristotle that has since disappeared from the face of the earth. There is also a sentiment on the part of certain characters in the story that books are dangerous things and cannot be entrusted to everyone. I think sometimes that one of the unintended consequences of public education has been that by making books available to all the hunger for books has been quenched. There is something subversive that is appealing to many about doing something that has been forbidden or deemed unhealthy by those in authority.

I think reading is important. All reading. I think more information is gotten from reading an article in the newspaper than is gotten from watching a summary on the nightly news or reading the blurbs on Netscape or MSN when we open our web browsers. I think there is also a broader spectrum of coverage in a newspaper. The paper does not have to be read off sheets of newsprint, it can be read online (I just got an iPod Touch that lets me read books and newspapers and even instruction manuals online wherever I go). It is not the venue in which the reading is done but the reading itself.

I want to introduce students to the wonders of great literature as was done for me, but I also understand that like solving the Riemann hypothesis, it is only those who already posses an interest, or are susceptible to the temptation to cultivate an interest that are going to be won over. As an English teacher I am not only passing the wonders of the language on to the next generation of English teachers but also to the next generation of scientists, mathematicians, and carpenters whose interests lie in different directions. I do not remember much of my high school biology, but I imagine I would remember significantly more if I had gone on to become a Biologist instead of an English teacher.

Many find this movie overly chatty because all that really takes place in the film are conversations, through the mails, about books. The hunt for books, the nature of books, whole works verses abridgements and the like. But anyone who appreciates a passion for books will find that passion comes through the dialogue in this film. I also like the film because like the book collector in the film, Helene Hanff, I am captivated by British Literature. As a result I could identify personally with most of the authors that are mentioned.

It is this passion that cannot be taught. I can share the passion I have and that passion might be a bit contagious, but for someone who has never experienced this passion for the written word it may not resonate very much. I think most of my students have books that have deeply moved them and they will probably go on to read books that resemble the books they have enjoyed. I am not certain there is a decline in the number of people, as a percentage of the population, who read classic literature or the kinds of modern books that will one day be classic literature. I imagine that as a percentage of the population those moved by language are probably comparable to those moved by quantum physics or evolutionary biology. But whatever the numbers actually reveal there will be some that got so excited the day they read a book that they rushed out and read another and others for whom it will be a fond memory of something they did once upon a time.