Looking into You
Jackson Browne

In the song the singer returns to a place he once called home. It has changed as he has changed and the scene the song evokes suggests the true meaning of nostalgia, the pain of coming home. Returning to a place where memories live is often an unpleasant enterprise. The place is never as we remember it and even if the changes in the place are not great the changes in us often are. Our changed selves are out of place in our old worlds. The bronze relief on the main door of the Library of Congress is titled Memory but what is being remembered? The figure in the door could be Penelope remembering Odysseus and wondering when or if he will return. It might be of any woman waiting for a warrior to return (and the objects she holds suggests she is remembering a warrior). Of course this woman could be the wife or mother of a soldier that has died and will not return. Perhaps the door is of a specific event that would be clear if I knew the door’s history but not knowing its history leaves the image open to many interpretations, all of which suggest the more melancholy aspects of memory. Perhaps all memory, by virtue of what it is, is tinged with melancholy.

There is a line from the Wallace Stevens poem “13 Ways of Looking at a Blackbird” (one of the ways of looking at the blackbird) that goes, “I do not know which to prefer, / The beauty of inflections / Or the beauty of innuendoes, / The blackbird whistling / Or just after.” I think what the poet is considering, especially in the last phrase, “The blackbird whistling / Or just after” is whether the event (“the blackbird whistling”) or the memory of the event (“just after”) is the more pleasant. Our memories of an experience, especially a pleasant experience, are often more pleasant and more “memorable” than the experience itself. This raises the question to what degree are we shaped by our experiences and to what degree are we shaped by our memories of those experiences, which are not always the same thing. This is perhaps what is being gotten at in the first phrase in the Stevens poem about “The beauty of inflections” and “the beauty of innuendoes.” Which is more beautiful the sounds that we hear or what those sounds suggest, hint at, or evoke? Are we shaped by inflections of memory or by their innuendoes? 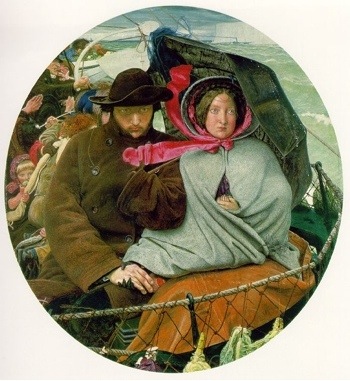 At the back of the song is also the suggestion of leaving home, he is visiting a house he lived in when he “first went out on (his) own.” The singer is not going to a new world in the same way the people depicted in Ford Maddox Brown’s painting above or Alfred Stieglitz’s photograph below are going to a new world, but in a sense when a young man or woman leaves home to make a home for him or herself in the world it is a new world that is opening up. It may not come with as much that is foreign and different as it was for the folks in the painting or the photograph but it still involves entering something of an unknown universe. When we leave home we know the landscape, the people around us look and dress largely as we do, they also speak our language. This helps, but the world is new nonetheless. It takes courage to go out on our own. Ours is a nation of immigrants, which means that for most us there is someone in our ancestry that made the trip the folks in the painting and the photograph are making. 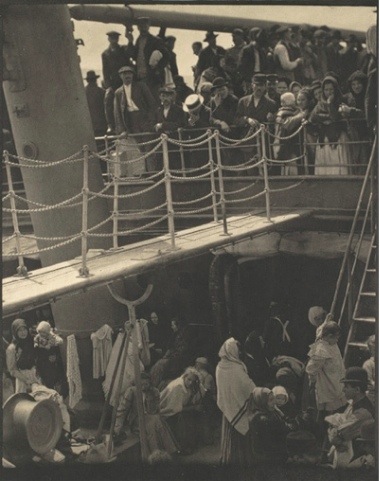 There was an article in the Guardian, “The private life of books,” about what is at times found in second hand books. I know I often buy books that people have written in because I want to know the thoughts of others, if others have understood the book as I understood it or were affected by it as I was affected. The world of the used book is a very different world from that of the new book. I have books that I bought in various places that are quite old. Some were printed before the technology that “burst” or separated the pages was invented. When these books were bought in order to read them the reader had to first cut the pages. There is a scene in The Great Gatsby where the narrator, Nick, is commenting on Gatsby’s library and the magnificence of the volumes that fill the shelves. Nick pulls down a book and soon discovers that none of the pages in any of the books he looks into have been cut. This tells us the books in Gatsby’s library served more of a decorative than literary purpose. When I open a book that is a few hundred years old in which none of the pages have been cut, I am having the experience of reading that book for the first time, not just the first time I am reading that book but the first time anyone has read that book. I have not had this experience often, but each time I have had it, it has filled me with a kind of awe. I am the first person, other than the printer who set the page perhaps, to read this book though it has had a home on someone’s bookshelf for many, many years. 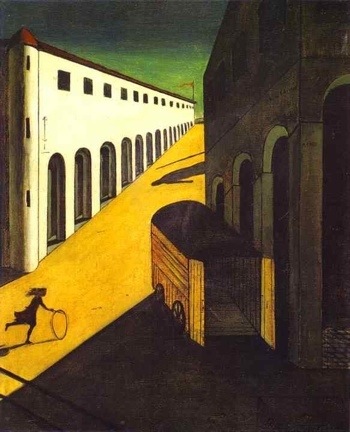 Mystery and Melancholy of a Street
Giorgio de Chirico.
http://www.abcgallery.com/C/chirico/chirico9.html

There was a review recently in the Washington Post, “Michael Dirda reviews ‘Agatha Christie’s Secret Notebooks’ by John Curran,” of a book on Agatha Christie’s notebooks, the notebooks she kept as she was writing her mystery stories. I have always been a great fan of detective fiction in general and of Christie’s stories in particular. I remember riding my bicycle through Scotland. I was by the banks of Loch Ness when a rainstorm started. I found a bed and breakfast where I could stay until the rain passed. One of the other guests there recommended the Christie novel The Murder of Roger Ackroyd. There was a copy of the novel in one of the sitting rooms. I picked it up and it was the first full length novel I ever read in a single sitting. It kept me up all night long and I never got sleepy. This was not the first Agatha Christie novel I read, but it is among the most memorable. Of course there was more to the experience than the book, there was also the place, I was in Great Britain, in a place that was shrouded by its own aura mystery. The window in my room looked out over Loch Ness and I remember looking out each evening to see if there were any strange creatures swimming about. But of course there were not, and my memory refuses to “enliven” this recollection.

The film is about a man trying to figure out who he is and the woman that is trying to help him. Something has happened to the man that has induced amnesia. All we know is that the event that brought on his forgetfulness seemed to involve something white and some lines. We only know this because of how he reacts to straight lines and the color white. The actor playing the old psychiatrist in the film is Michael Chekhov, Anton Chekhov’s nephew. He (Michael Chekhov) was a student of Constantin Stanislavski and went on to develop his own approach to the craft of acting. He is known for developing the concept of the “Psychological Gesture,” a behavior or action that reveals an inner psychological reality in the character being portrayed. I think knowing this makes his portrayal of the psychiatrist in the movie that much more delightful. I think that Gregory Peck in his portrayal of the amnesiac makes use of this theatrical device at various times in the film, including those moments with razor in the clip above. It is also what we do not know about this character’s past (and what we think we know) that creates the tension that permeates this scene.

This suggests the limitations of knowledge or at least the limits of what we think we know. Knowledge can be deceptive. We think we know a thing; we have studied it and found out a lot about that thing. But if there is any complexity to what we know the odds are our knowledge is limited and the conclusions drawn from it are not always reliable. This can create problems because we often have to act on what we know and we often cannot be sure we know enough to act. Chekhov’s character in the film believes he must act on what he knows, but as the film will show he does not know enough to justify the conclusion that he draws. He wants to go to the police because he believes Peck’s character is dangerous. But this view may be questionable. You will have to watch the film to find out if Chekhov calls the police or listens to Ingrid Bergman and suspends judgment.

Memories make our lives richer. They enable us to derive pleasure from an experience over and over again. When I read a book that evokes or alludes to another book that I have read that evocation or allusion brings back the original experience of reading that book (or part of the experience). Of course there is the other side of memory, a side like that experienced by the character in the film, where memories, or the ghosts of memories, haunt us and keep us from enjoying the present or of building a future. And memories often will not be controlled. They will visit us in their own time and often stay longer than they are welcome. Little things often bring them out of hiding. For me the smell of diesel fuel takes me back to London in the 1970’s and graham crackers bring me back to a room above a plumbing store on Pacific Coast Highway in Redondo Beach, California. These are pleasant memories and I welcome them when they come. But there are always others that are less welcome that have their own triggers that I will not mention here for fear of provoking them.