The song is an excerpt from William Blake’s poem Jerusalem The Emanation of the Giant Albion. The passage glances back to an English “golden age” in order to comment on England’s present and hopefully the contrast will inspire the people of England to make a better, more just future. This illustrates I think our difficult relationship with the past. We often try to distance ourselves from it in order to establish our own moment in our own slice of history. But it is often the past that provides a springboard of sorts or a justification for the path we choose to pursue. Sometimes we forsake the immediate past, so immediate it borders on the present, with an appeal to a more distant past that lends legitimacy to our choices.

The painting is from the Italian Baroque period. It captures images that might be found in a museum from the Classical Roman period. It is a collage of sorts that captures much of what the artist admires about this period. These images also allow him to demonstrate his skill at his craft. Again the past gives the artist, Pannini, his inspiration and lends an aura of authority, of importance, to the work. The painter also assumes an understanding of the significance of these images on the part of his audience, he assumes a certain amount of learning and exposure to the past and those periods in the past that are most revered. But Pannini does not really introduce anything much that is new or different from the painters that came before. The painting reveals a knowledge of the past and great skill with perspective painting, but it does not tell us much, aside from the fashions of the day as worn by the visitors to the museum, about Pannini’s moment in history, except, perhaps, to suggest that Pannini’s moment was captivated more by the past than the present.

The film clip from Chariots of Fire illustrates how the past is often used to inspire the youth of the present to make their own mark upon their own time. The Master of Caius College is evoking the memory of earlier students and their accomplishments to provoke this day’s freshman on to greatness. There is an irony here because one of the freshmen present, Harold Abrahams, will go on to greatness by challenging the conventions of his day. Later in the film this same Master of Caius College will lecture Abrahams about the importance of doing things the way they have always been done, a message that in some ways contradicts the message he delivered at the beginning of the film. Abrahams leaves suggesting he will travel his own road and that he will bring the future with him. Much of what Abrahams does is inspired by the traditions of the school, but he does what he does in a way that dismantles some of those traditions. Perhaps this is the healthiest view of the past.

In an article on T. S. Eliot in this week’s Guardian, “TS Eliot rejected Bloomsbury group’s ‘cursed fund’ to work in bank”, the poet Ted Hughes’ comments on hearing of Eliot’s death are quoted. He said, “He was in my mind constantly, like a rather over-watchful, over-powerful father, and now he has gone, I shall have to move – be able to move, maybe.” Eliot was a great influence on Hughes’ work, but to be finally successful Hughes needed to grow beyond that influence, something he could only do with difficulty while that influence was a living presence. The past had to in a sense die before he could make his own present. But is the influence entirely missing from the work and can the work be entirely understood without an understanding of the influences that provoked the work?

The paintings above and below both evoke Classical antiquity, the painting by Rossetti evokes its mythology and the painting by Raphael evokes its philosophy. Yet Rossetti belonged to a movement, The Pre-Raphaelite Brotherhood, that was actively seeking to distance itself from the work of Raphael, who painted the picture below. Though at odds with each other, each looked back to a similar moment in the past to provide the subjects for their art. The past shapes and inspires the present. It is also difficult for a viewer of these paintings to fully appreciate what is happening in the paintings if that viewer does not also understand the classical allusions the paintings make. 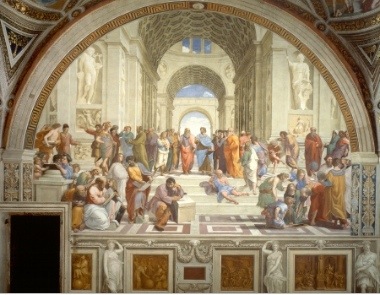 The painting by Rossetti is of Proserpine, a goddess from Roman mythology associated with the springtime and the harvest. The pomegranate and the vegetation growing along the window evoke this association. In the painting by Raphael the philosophers Plato and Aristotle are the focal point. These two philosophers represent Greek philosophy and the contributions of these philosophers to western civilization. There is a beauty in each of the paintings that can be enjoyed even if the allusions are not known or understood, but a knowledge of these allusions adds richness to each of the works and the viewers’ appreciation of those works.

There is a review, “I Pledge Allegiance to Core Knowledge”, in this Sunday’s Washington Post of E. D. Hirsch’s new book, The Making of Americans. Hirsch is ridiculed by some and admired by others for his beliefs surrounding “cultural literacy” and the importance for each generation to learn the culture that has shaped the culture in which they live. He believes that study of difficult texts in an English class is important not only for the ways in which these texts challenge and develop the analytic skills of students, but for how they pass along many of the ideals of the culture. He can point to how students brought up on his curriculum do better on standardized tests. Those that disagree with Hirsch do not have much use for standardized tests and therefore do not see in this much of an argument for his curriculum.

As a teacher I am troubled by our over-reliance on standardized tests, but I am also troubled by those that would do away with the “classical literature.” I agree with Hirsch that reading difficult texts grounded in our cultural heritage develops the cognitive skills of students. There are problems with much of this literature in that it often includes attitudes and views that are troubling. Still, these views are a part of our past and it is unwise to ignore them. It is also unwise to ignore what is valuable in the older authors because there are unsavory elements to their work. The same is true of contemporary works, we may not see what is troubling in them because we are so close to them, but those that come after us will certainly see them. I also think the more aware we are of the problems in the literature of the past the more sensitive we are likely to be to potential problems in the literature of the present.

It is certainly true that America has been shaped by many cultural influences and that each of these influences is to be valued. But it is also true that there is an “American Culture” and it is important that students know this culture. One aspect of American culture that I find particularly attractive is its willingness to incorporate cultural influences from other parts of the world. Isaac Bashevis Singer, an Eastern European Jew, is an American writer, or at least he has been embraced by the American literary traditions and has won many of its most prestigious literary prizes. Amy Tan is an American writer who captures aspects of Asian culture and it influences on American Culture. There are not many cultures in the world that are willing to do this.

This clip from Shakespeare’s play Richard III illustrates another way the past impacts on the present. Shakespeare used the history of Richard III to comment on the history of his Elizabethan moment. Richard usurps the throne and he is depicted as quite villainous in the play. Later writers, I like Josephine Tey’s novel Daughter of Time, have made the case that Shakespeare misrepresents Richard and that Richard was not an evil king but an enlightened one. But the Elizabethan court was concerned about usurpation, in part because they were a patriarchal society being ruled by a woman. The film in turn resets the play in pre-World War II Europe and uses Shakespeare’s text to comment on the rise of fascism in the not distant past and to perhaps suggest that there are seeds of fascism in contemporary society.

The film illustrates that we can often learn something about the present from studying the past and that we can avoid some of the problems faced by those that came before us by being made aware of those problems. Mark Twain said, “The past does not repeat itself, but it rhymes.” It is rare for the same thing to happen in the same way, but there are certainly similarities and a knowledge of the past and its literature can offer insights into how some difficulties can be avoided. 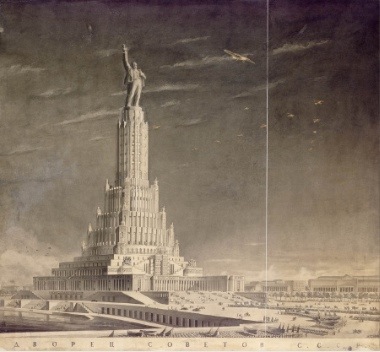 The past is often evoked to lend legitimacy to an enterprise. This drawing for the “Palace of the Soviets” combines modern and classical architectural forms. These forms lend a kind of majesty to the project. In many ways it is architectural propaganda, and to recognize how the propaganda works it is helps to know how classical forms are being manipulated. The statue of Lenin in some ways evokes The Statue of Liberty (I cannot tell if Lenin is holding a lamp or is merely raising his arm for rhetorical effect but I think the pose is deliberately ambiguous). The classical allusions suggest an historical imperative that culminates with the soviet state and the airplanes flying overhead suggest a modern, technologically advanced culture. There is also the largeness of scale to be considered. The point is, though, that a knowledge of cultural history and the way aspects of that history are being manipulated helps an informed viewer to see through the propaganda.

It is important to be aware of the past and its influences on us, some of which are subliminal and fly easily under our cultural radar, if we are not to be fooled or manipulated. It is also important to build upon the cultural foundations we have inherited. The past, present, and future impact on each other. To exclude the contributions of the present from our study is to blind ourselves to the richness of our moment and the value of our work. But, conversely, to exclude the contributions of the past is to isolate ourselves from the forces that have made us what we are. It is also difficult to appreciate the depth and breadth of the present moment and all that it contains if we cannot see the influences that have shaped that moment. Lichtenberg said “To do just the opposite is also a form of imitation.” I am not sure this is always true, but much of what a culture produces is a response of one kind or another to what has come before, and to fully appreciate that culture it is useful to know its family history.