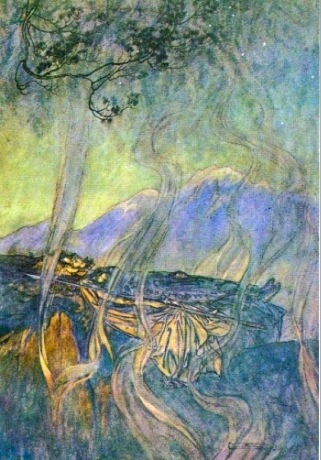 The song is about leaving home and the emotions it evokes as well as the concerns. The painting is in a sense about a father throwing his daughter out of the house. Brunnhilde has disobeyed her father and her father, Odin, the chief of the Norse pantheon of gods, punishes her by putting her to sleep and surrounding her resting place with a ring of fire. The story is a “sleeping beauty” story in that she is ultimately awakened by a kiss from Siegfried who braves the fire to rescue her.

For some leaving home involves leaving the house and for others it involves being thrown out of the house. Either way it is difficult. But starting out on one’s own is always about facing the future. There was an article in the Guardian, “Arthur C Clarke and the end of upbeat futurology,” about the futurists of the mid to late 20th century, especially the futurist Arthur C. Clarke. The gist of the article is that for Clarke and others like him and all that followed him the future was full of promise and optimism. There were amazing things that were going to be accomplished by the century’s end, most of which did not come to pass. What is especially disturbing about this is that I grew up in a world where anything was possible and the world that is being given to the next generation seems to be one in which little of consequence is possible. I wonder if children growing up today are as excited about the world they are moving into as I was about the world I was moving into when I was a child. 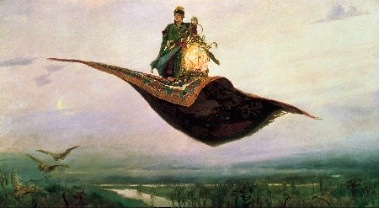 The Flying Carpet (Ivan Tsarevich with the Firebird on a magic carpet)
Viktor Vasnetsov
http://en.wikipedia.org/wiki/File:Vasnetsov_samolet.jpg

Part of the optimism and excitement I felt about the world came from the stories I read. I read a lot of H. G. Wells and Jules Verne and other writers of science fiction. Of course Wells’ view of the world was not always a positive view, his most famous novels were about things going wrong, an island with a mad scientist playing games with genetics, alien invasions, and an invisible man who was not motivated by kindness. One story I remember especially well was called “The Magic Shop” about a child with magical powers controlling mom and dad. The child was a malevolent child who was not making the world into a happy place, For children who often feel powerless there may be a delicious irony in the way tables are turned in the story, but the story was not really a happy one and its ending, even to a child enjoying the tables being turned, is disturbing.

But other writers presented a magical world like that of the paintings of the flying carpet. As the article points out, Arthur Clarke believed that “advanced technology (would be) indistinguishable from magic.” Our stories today still have magic but it is unrelated to technology, magic has been put back into the realm of fantasy and taken out of the real world. I enjoyed the stories of flying carpets and exotic places that could only be visited in the imagination, but I was also excited about a world in which some of that magic would be realized. Perhaps it is important to not only teach our children to dream but to give them a realistic hope that dreams can be realized, not just the dreams of a happy and successful life and the ability to set and realize goals, but the ability to believe in dreams of a wiser world with a more active imagination. 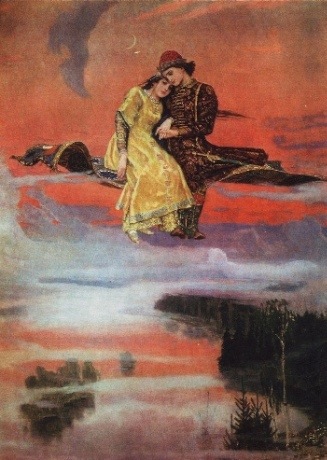 Of course these new worlds that we dreamed of when I was child were often a bit “Utopic” in that they imagined a world in which science made life more just, less painful, and more pleasant for all. Of course these are not things science can deliver and one person’s Utopia is another person’s prison. Much of life is about giving up things we would like so that others can have things they need, whether that is in a marriage where one does what the other desires from time to time, or in a nation where each part gives up something to the greater good of the whole. Part of learning to live well is learning to live with a certain amount of sacrifice and suffering. Stories, even those with magic carpets, often teach us that. Often the most important lesson the stories we read as children teach us is that life can be difficult and that suffering is often followed by rewards of one kind or another.

There was an article in the New York Times, “New Envoy’s Old Advice for Children: Read More,” about Katherine Paterson being made the new “national ambassador for young people’s literature.” She talks about writing the stories she does not for her children but for her own “inner child,” suggesting that the stories we tell should be stories that we would first want told to us. In the article she talks about growing up in China at the start of the Second World War and witnessing some of the things done by the Japanese in China during that war. As a result she came to hate the Japanese. Upon graduating college she was given the opportunity to go to Japan as a missionary. Her hatred was such she did not want to go. She did go. She said, “It was one of the greatest gifts of my life to be able to be in a situation and find yourself loved by people that you thought you had hated.” Her first book also came out of this experience and there is probably a lesson in that as well, it is a lesson stories often tell us, it is a lesson found, for example, in the Harry Potter stories, that those we thought were our enemies are often our friends.

Another theme often found in children’s stories is that though we are surrounded by forces that mean us harm there are other forces present that watch out for us and protect us. In the film clip Maleficent intends great harm, but there are three other spirits, Flora, Fauna, and Merryweather, that guard the sleeping princess. As I have grown older the stories I now read have fewer of these protective spirits and the message is that if we are to be saved we must save ourselves. It is perhaps unrealistic to expect others to come to our aid or to expect divine forces to watch over us, but often it seems that aid and comfort is to be found outside of our own resources. In the classical literature it is not unusual to find characters protected by divine forces, Odysseus is protected by Athena and Aeneas receives help from different gods and goddesses at different points in his journey. But ours is a skeptical age and we tend to believe only in those forces we can see and touch. In this sense, perhaps, the stories we tell our children instill a false sense of security.

Leaving home often begins with solitude, with finding ourselves alone and perhaps friendless. Our beliefs teach us to what extent we can depend on forces outside ourselves. For many God and the teachings of their religion are real. For others religious beliefs and practices are an intrusion that takes our focus off of the problems at hand that we alone must solve. I have my beliefs about this but that is not really the point.

I think we depend on stories to show us something of the way and to help us figure out how to live well. We all need comfort and we all need to feel cared for. That we have these needs does not mean that there are forces out there that will see to it these needs are met, but it does suggest that others have these same needs and that we have an obligation to care for our neighbor. It suggests in part that our need is met by giving what we need to others, that there is a beauty sleeping in all of us that needs to be awakened. 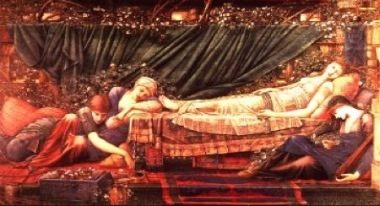