Down on the Corner
Creedence Clearwater Revival

Where the World Can’t Find Me 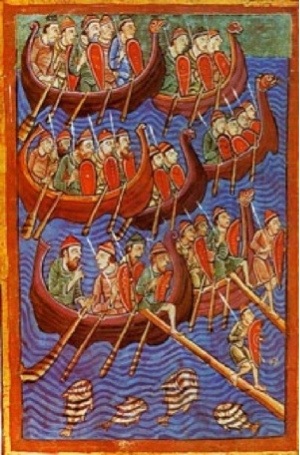 The song celebrates a group of folks, Willie and the Poor Boys, who live in a poor neighborhood but manage to carve out a space for themselves every night where the world behaves more to their liking, and the liking of those that take the time to listen to the music that they make. There is something in human nature that wants its own private space where there is no one to answer to. For some it is their home at the end of the day, that place where there is no doing as they are told, though with the advent of the cell phone and other technologies the idea of a fine and private place is becoming a thing of the past.

The paintings above and below are of Vikings. They produced an impressive literary tradition of Skaldic verse and prose sagas that are among the finest adventure stories in any language. But they were an independent people. When Harold made himself king of Norway they pulled up stakes and moved to Iceland where they set up their own little world with its own somewhat democratic form of government. At the time a land that was a sea voyage away from any other land was an isolated place. Vikings were the best and the most daring navigators of their day. They sailed most of the known world and a bit of the unknown world. And though they were a pain and a terror to much of the world, they had their own corner of it that they could call home where outside forces could not, or at least did not, intrude. 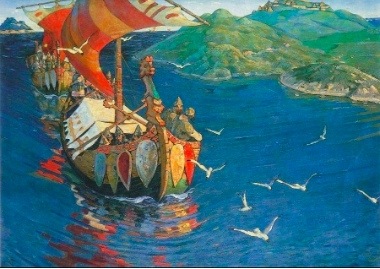 There was an article in this week’s Boston Globe, “The mystery of Zomia,” about various peoples that live in the mountain regions of Southeast Asia. According to the article groups of people, the Hmong and the Wa for example, migrated into the mountains in order to escape the tyranny of the lowland governments of the Mughals and the Han among others. These mountain folks not only left these oppressive governments behind, but all of the cultural accoutrements that came with them. As a result these mountain people did not develop a written language or a literary or cultural tradition. For these people literature and art were associated with oppression. On the other side of the coin, theirs is a very “survival of the fittest” kind of existence with a very rough justice that can be bit oppressive in its own way to certain groups within the culture.

But this raises an interesting question, is culture a liberating force within society? The Vikings isolated themselves after a fashion and created rich cultural traditions, while other groups have taken themselves into isolation and eschewed the cultural trappings they might have inherited and did not adopt a formal culture of their own. I find it difficult to believe, though, that a people can survive without stories, even if they are the stories told around a campfire that are never written down. Part of what makes a culture and a people, a culture and a people are the ways they go about doing things and the way they look at the world. Even if a formal “Culture” is abandoned there are still ways of doing things, the way a camp is set up for example, the distribution of labor, and the like that become traditions that are handed down from one generation to the next. They are perhaps, the little rituals that Hemingway captures in his stories and novels. When the Old Man, in The Old Man and the Sea, goes fishing, for example, there are proper ways to trim a sail and to set a hook and limits to how far out to sea one takes their little boat.

But are agreed upon ways of living and doing things the same thing as a culture? For Hemingway’s Old Man there is “baseball” which is inessential to daily survival on top of all the little rituals he has learned that are essential to daily survival. There are lessons to be learned from baseball about how we should live, about tenacity, and about giving our best effort to all that we do. These are lessons that our cultural traditions often teach us. And though these traditions may not be set down in writing or preserved in paintings or sculptures they are surely present somewhere in the heritage of a people. The Hmong may not have a print copy of their Iliad or Odyssey but it is very likely there are stories they tell one another that perform for them the office of The Iliad and The Odyssey. 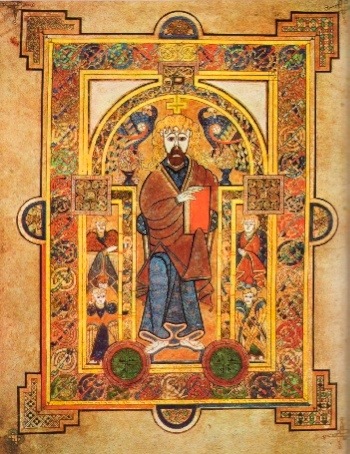 There was an article in the Chronicle of Higher Education, “A Monk Saves Threatened Manuscripts Using Ultramodern Means,” about a monk who is digitizing early Christian manuscripts in order to preserve them, he is performing a “transcriptional” service not unlike that performed by the medieval monks that copied and recopied the manuscripts that are now being digitized. (There was an article of a similar nature in the New York Times a few weeks ago about a woman transcribing the Torah, “A Torah Scribe Pushes the Parchment Ceiling,“ a book of great importance to the Jewish culture.) Both the modern and the ancient monks preserved their cultural artifacts using the best technology available to them. The monasteries, especially in the Middle Ages, that preserve these documents are often remote and isolated places. They were removed, often, from worldly influences in order to pursue religious traditions that, for those that practiced them, were liberating.

There is a paradox, I suppose, to a tradition that imposes rules and restrictions on the practitioners of that tradition that most would find constraining and restrictive but the practitioners themselves find freeing. Perhaps an aspect of liberty is the willingness to place limitations on the exercise of that liberty to insure that it is exercised responsibly. Of course the restrictions monks placed upon themselves go beyond this and suggest that self-denial is perhaps an essential aspect of the liberty they enjoyed, that true liberty lives not just in doing but in choosing freely not to do certain things. Liberties, like those found in the Bill of Rights free us to live as we choose in our free society, it liberates us from the tyranny of government. Self-denial on the other hand liberates us from the tyranny of ourselves and the desires, compulsions, and impulses that often dictate our actions and behaviors.

The film clip suggests another aspect of isolation, though in this instance it is not a self-imposed isolation. In the film (and the book) a family is shipwrecked on an uninhabited island and must find a way to survive with what little is left them and with what they can “harvest” from their surroundings. But as with those groups that have isolated themselves there is a freedom that comes with being marooned. The family can make their own rules; shape a lifestyle that is pleasing to them, within the limitations imposed by the island. They are a bit different from other castaways, like Tom Hanks in the film Castaway or Robinson Crusoe in the book that bears his name, in that they have each other, they have company and can make the beginnings of a small society. Of course it is a very small society and over time they are likely to feel the need for a larger community. But for the moment they are shaping an idyllic paradise. But there are no guarantees, I suppose, that the life of a company of castaways will turn out so well. William Golding’s book The Lord of the Flies suggests other, less desirable, possibilities.

Still, mountains and other natural barriers provide a means for cultural discontents to separate themselves from a way of life, a social order they find distasteful or oppressive. The Scottish Highlands offered such a refuge to the more independent and iconoclastic clans of the region, as did the western frontier for many American malcontents. Perhaps the region of America most like the Zomia region of Southeast Asia is Appalachia. The people that settled these mountains were also looking for a way to separate themselves from a culture they found disagreeable. They resisted public education, at least as it was practiced in the lowlands, and were distrustful of any cultural baggage that they associated with the lowlands. The stereotype of the region is often of a people that are ignorant, illiterate, and unsophisticated. However, as the Foxfire series of books, bluegrass music, and other cultural contributions of this region of the United States attest, this is a community with a deep, rich and vibrant heritage, and the culture of the nation is enriched by it.

It is the culture we choose to preserve that identifies us as a people. We may enjoy the cultures of other parts of the world, read their books, enjoy their paintings and music, but it is the literature, art, music, and traditions that we as a people preserve and value because of what they reveal about us as a people that define who we are as a people. We are the curmudgeonly anger of talk radio; we are the brash in-you-face iconoclasm of rock and roll music and graffiti art; we are the kitschy “camp” culture of vampires and young wizards. But we are also the epic, literary individualism of Walt Whitman and Henry David Thoreau, the stark loneliness of an Edward Hopper painting, and the urban lyricism of George and Ira Gershwin. There is a “high brow” and a “low brow” culture that say much the same things about who we are as a people and there is a place, I suppose, where the high and the low meet and put a face on the character of the nation. 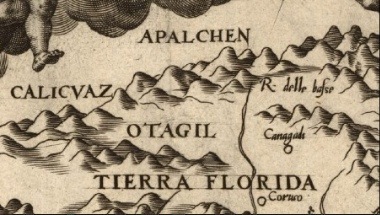 Detail of Diego Gutiérrez’s 1562 map of the Western Hemisphere, showing the first known use of a variation of the place name “Appalachia” (“Apalchen”)
Diego Gutiérrez
http://en.wikipedia.org/wiki/File:Gutierrez-1562-detail-app1.jpg