For Love of the Game

Comenius on a 20 KCS bill
http://wapedia.mobi/en/File:Comenius20.jpg

The picture is of old Soviet era currency from Czechoslovakia. The man depicted on the bill is John Comenius. He was a 17th century philosopher/theologian who is responsible for developing the form that public education takes to this day. He developed a structure for schooling of kindergarten, elementary school, secondary school, college, and university that is the basic structure of public education in America today. He also articulated a philosophy of education centered on thought and investigation, an application of the scientific method to the classroom, that is also practiced in many classrooms to this day. Lastly, his influence on the curriculum and the course of study is also still felt; a belief that getting an education should be enjoyable and that it should be universal both in its scope and in its availability; that it should cover the breadth of human knowledge and that it should be available to all. He was a product of his time and there are things he believed were important that may not be seen as important today, but nonetheless his influence on education is a profound one.

At the heart of modern education is testing. In America in any given year students spend many weeks taking tests. They may be the conventional tests associated with midterms and finals or the completion of a unit of study or the ever more ubiquitous state and federal tests that are being imposed on schools across the land. Most of the time spent testing probably runs counter to Comenius’ belief that getting an education should be pleasant, though if the stress that is placed on grades were less onerous it might be easier to see a test as a pleasant challenge than as a threat to future prospects. There was an article in The Guardian a few weeks ago, “‘You may now turn over your papers’,” about four English writers who were given “the most difficult test in the world” just for the fun of it. Will Self was given the question “Is there something inherently coarsening about sport?” The song at the beginning, Playing Right Field underscores one area in which it coarsens, that of choosing up sides. The last to be chosen have been marked and that mark often never leaves. Though the song is humorous, the issue at its heart can be devastating to the individual experiencing it.

But it is not really this aspect of the coarseness of sport that Self’s essay addressed. Self’s concern is that sport dulls the mind’s capacity to think; that in taking games too seriously we do not take life seriously enough; we become more engrossed in earned run averages than in the maintenance of our democracy. This to an extent can be seen when riot police are sent to secure the streets after a local team wins a championship. This does not always happen and it does not happen everywhere, but it does happen. It is also too often true that too many can draw intelligent conclusions from the statistics surrounding their favorite sport, but cannot do the same with the statistics that surround a mortgage or the choices that life often calls upon all of us to make. 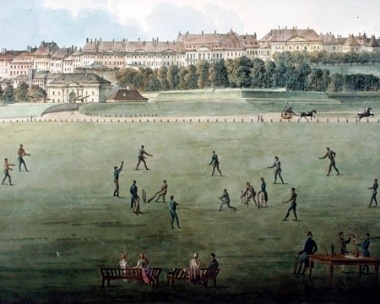 The painting above and the woodcut below are of two “elegant” sports, cricket and archery. It is difficult to see cricket as a sport that coarsens. It is structured around the daily life of the typical Englishman, a match begins after breakfast with a break for lunch and tea and ends at suppertime. It is played over a weekend, or so I was told by the man in Salisbury, England who sold me the bicycle I rode throughout Britain and the Continent. He may have been teasing me a bit, I do not know. Wikipedia, though, says a typical match lasts five hours and a test match can take five days to play, so maybe he was not deceiving me, or at least not much. But it is a sport where everyone wears white and is civil to one another, at least in theory. 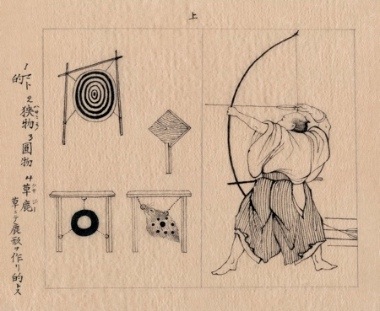 Archery is also an elegant sport. Though the bow and arrow is an effective weapon the sport involves shooting at targets and there is no physical contact between competitors and both winners and losers go home in one piece. When Robin Hood competed for a prize he was a sportsman not a soldier and everyone could enjoy his prowess. There is, of course the less civilized use of the bow that created a greater tension between Robin Hood and the civil authorities of his day. There is, I suppose an aspect of all sport where everyone can enjoy and appreciate the skill and focus of the athlete. To play any sport well requires a great deal of intelligence, discipline, focus, and dedication; qualities that serve anyone well in the long term and have an important place in modern education. 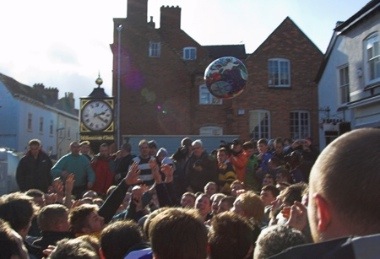 A view from inside the mob taken at the 2006 Royal Shrovetide Football Match (Mob Football)
Gary Austin
http://en.wikipedia.org/wiki/File:Japanese_archer_1878b.jpg

The photograph above was taken at a “Mob Football” match from the midst of the festivities. It is said of mob football that there is one rule, you cannot commit manslaughter or murder, but evidently, everything else is fair play. It is also a very democratic sport in that anyone who wishes and who plays by the rule, can compete. It is a game that can accommodate an unlimited number of players. Shakespeare includes in his play Comedy of Errors a football joke, “Am I so round with you, as you with me, That like a foot-ball you do spurn me thus: You spurn me hence, and he will spurn me hither, If I last in this service, you must case me in leather.” Of course for Shakespeare, as for most in the world to this day, football is soccer, though the football being played in the photograph is a medieval antecedent to rugby. 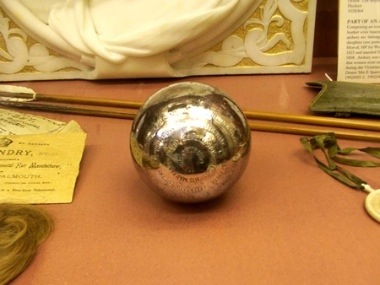 Mob football is another name for Cornish Hurling, which was adapted from the Celtic game of hurling or shinty. It is interesting, perhaps, that hurling was an antecedent of the modern sport of ice hockey, it was played with a ball on a field of grass with what look like field hockey sticks and Cornish hurling was an antecedent of the modern American sport of football, as well as of rugby; perhaps three of the most aggressive sports being played today and perhaps what Mr. Self had in mind when he wrote of the coarsening influence of sport. A sixteenth century gentleman said of Cornish hurling, “The Cornish-men they are strong, hardy and nimble, so are their exercises violent, two especially, Wrestling and Hurling, sharp and severe activities; and in neither of these doth any Country exceed or equal them. The first is violent, but the second is dangerous.” The photograph above is of the ball that is used in Cornish hurling. It is made of silver and weighs about a pound. It reminds me of the golden snitch that Harry Potter pursues in his games of quidditch, a sport that shares some of hurling’s physicality.

Though the influence of sport may be coarsening, it also teaches collaboration and the importance of teamwork to the achieving of a goal and this has a place not only in sport and education, but also in the fruitful and happy living of a life.

This film clip illustrates the importance of inspiration, collaboration, and of thought conducted over time. The image of the coffee house as a space where ideas could be exchanged and developed is a fruitful one. It is not just that the consumption of coffee replaced the consumption of alcohol (or at least moderated its consumption) but that the coffee house provided a space for sober conversation. But I think the most moving part of the clip concerned the incubators sent to impoverished corners of the world where infant mortality rates were high. As long as the machines worked the babies survived, but when after a year or two of use they broke down, there was no one who could fix them. This part of presentation suggests the importance of design and that design be adapted to the circumstances of those the design is intended to serve. Where these machines went there were few skilled in the maintenance of high tech machines, but many skilled in the maintenance of automobiles and an incubator made of car parts could accomplish more than its high tech cousin. Most innovation begins with someone thinking differently about something. But the end product usually takes time and often requires some help and input from others; that without collaboration innovation may be much slower in coming if it comes at all.

Perhaps sport illustrates this, and perhaps this is a way in which its influence does not coarsen. Though every team has its star players, the team is at the end of the day a team and if they all do not work together the stars cannot make the team successful. When I was a boy there was a new team in Los Angele, The Los Angeles Clippers (I think they have moved since to San Diego). I remember one sports writer saying that this team had some very talented players on it but that they were all playing for themselves; too many aspired to be team’s “star player” to the extent that they were incapable of playing like a team. Skill by itself is often not enough to make us successful in life, it helps if we also know how to play well with others, to collaborate and allow our ideas to be nurtured and nourished by the ideas of others. It also helps to have a place, like the coffee shop perhaps, where ideas can be shared. Ideas and innovation need both the den and the conference room to achieve their potential.

I like Rabelais description of the Abbey of Theleme. His is a Renaissance idea of the perfect space and it is idealistic (though it may not be agreeable to the ideals of all). But what I like about Rabelais is his enthusiasm for life and thought and his belief that a happy life cannot be a “thoughtless” life, that thought is essential to happiness. If Comenius was correct in his belief that learning should give pleasure than Rabelais must also be, at least in part, correct. I think the problem with sport is that it is often given too much space in our lives; we equate “happiness” and “fulfillment” with fun. Not that there is no place for fun, but that it is necessary to recognize, perhaps, its limitations; though often I think the problem is much more profound. Many have forgotten how to have fun at anything other than play, or perhaps more precisely they have lost the ability to find the play and the fun in the work that they do. 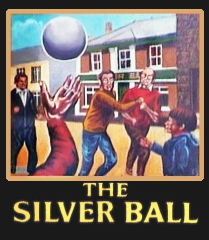