Lewis and Clark and the Digital Age 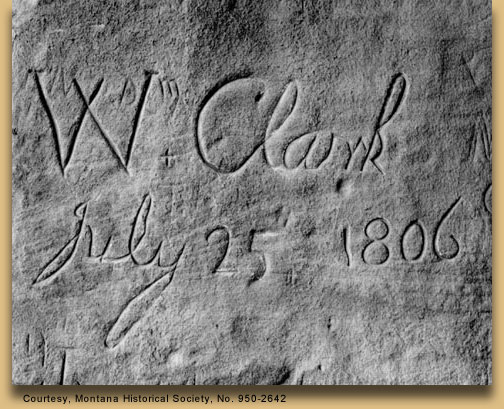 The natives,” Clark wrote in his journal for July 25, 1806, “have engraved on the face of this rock the figures of animals &c. near which I marked my name and the day of the month & year.” He had done the same thing in the same sort of setting at least once before. Back on July 12, 1804, near the mouth of the Big Nemaha River, in Nebraska, he wrote, “observed some Indian marks, went to the rock which jutted over the water and marked my name & the day of the month & year.” 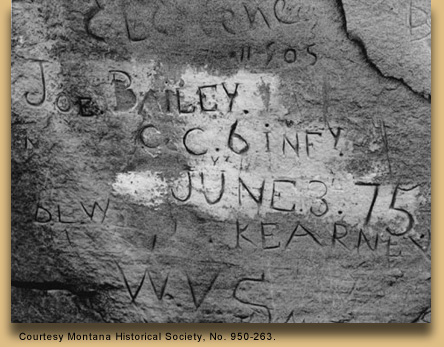 Is the problem with social networking technology that it is inherently unsafe; that it is too dangerous for use in the classroom or, is this technology just a tool that is subject to the same potential for misuse as any other tool that is used in the classroom? I agree with Steve Burt that it is not the tool but how the tool is used that makes it “unsafe.” The images above are of “messages” left by folks making their way across the American frontier. I am sure William Clark when he walked across the American continent with his friend Meriwether Lewis used his hammer and chisel for more productive activities than “tagging” his name and the date of his visit on this rock overlooking the river down which he traveled. Joe Bailey of the 6th Infantry might have had more productive things to do as well back in 1875, but he left his tag on a bit Montana rock as well. Clark and Bailey, it could be argued, made improper use of the tools that were given them. Should we be surprised that some of our less mature students would use the tools given them in an equally irresponsible way?

I think there are concerns that teachers should have about the social networking tools, just as there are concerns teachers should have when they see pencils and pens used to leave messages on desktops. Monitoring student behavior is always difficult and becomes more difficult as classroom sizes increase. But as Burt points out we do not deny students pencils because they may not always use them properly. The more real concern is for how these new technologies change the landscape of the classroom. Jerome Monahan in an article on the new networking technology wrote:

But, in the end, one of the hardest aspects of social networking that schools will have to tackle is the fundamental shift in teachers’ working practices it requires. “In such an environment teachers become facilitators,” says Joanna Bryce, “guiding students into becoming more critical readers and more responsible in their peer-to-peer interactions. (Monahan)

I have never been a fan of teachers as “facilitators.” In fact I do not really like the word, perhaps because it has been so over used. But I think there is something to be said for expertise and training. I suppose at heart I am an elitist. I think some things are more worthy of study than others, that the teacher, due to training and experience has insights into their discipline that students are unlikely to have. I teach English where it is a commonplace occurrence for a student to see something I have not, and understand students often understand more than we give them credit for; still the teacher does more than just moderate. I once thought of the teacher as a kind of tour guide taking students down a path she or he has traveled before but the students have not. Just because teachers have been there before does not mean they have seen all there is to see; students often see things others have missed. Still, the teacher knows most of the most important things to watch out for.

The teacher’s ultimate job, I think is to provoke self-discovery. And I think the social software can be useful in this regard. When I first heard about Second Life for example, I thought of creating an assignment like “Did Shakespeare Buy His Own Groceries” and then have the students use the software to create an Elizabethan village where students would have to imagine how the day to day living was done in Shakespeare’s time. How were clothes purchased, what could you read in the newspaper (or the Elizabethan equivalent), what kind of speech was tolerated and not tolerated? I think the knowledge students got from constructing such a village would give them some insights into how the characters in Shakespeare’s plays experienced life adding depth of meaning to some of the things characters do or say. Then of course I discovered that adults cannot visit the villages teens create so there would be no way to access the finished product or at least the assessment would be very difficult.

I can see how platforms like YouTube or MySpace might be used by students to create videos that demonstrate their understanding of a poem or story, but I am not sure this is the most effective way to accomplish this goal, though I am open to it. I feel more comfortable with wikis and blogs I suppose. But this is probably just because they more closely resemble the way I have been teaching in the past and the classroom as I understand it. Though I do not like the word “facilitator” I basically agree with Monahan’s point that teachers have to change the way they look at the classroom and the way they present their material.

I believe the best way to reform education is to make teachers change the way they do things. The changes may not in themselves be productive or meaningful changes, but the process of rethinking the way we as teachers do what we do forces us to reengage with those elements of our discipline that first excited us, to, as Ezra Pound once said, “Make it new.” As teachers I think our students benefit if every few years we make our classrooms new, change them into something else. It helps to regenerate enthusiasm in the teacher and throws the students a little off guard because they can never be too certain what to expect and we always pay more careful attention when we cannot anticipate what is coming. But I digress.

I think that when we give students the opportunity to use their imaginations, to be creative, we provoke thought. That the process of putting an abstract idea, an inspiration, into a concrete form, like a video or a visual image, requires the same degree of clarity in the mind as to what you are trying to communicate as does writing an essay. If the creative venue enables the student to focus her or his thinking more concretely and deeply on the concept at hand than it is a good thing. Again it is not the tool that communicates these ideas it is the person using the tool to achieve a goal. As teachers we are not just trying to teach students the major concepts of our disciplines but also the proper use of the tools that communicate our students understanding of those concepts. And the tools we teach our students to use should resemble the tools they will have to use when they leave the high school campus to compete in the much larger worlds of work or the university.