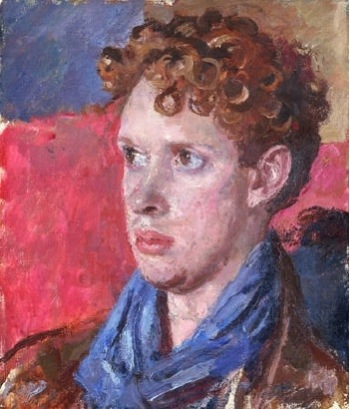 My first memory of college is of a professor who when he found out I liked poetry took me to the audio-visual center of the college and set me up with a record player and a two disk recording of Dylan Thomas reading his poetry. The poem, “Fern Hill”, that opened things up was on this recording; in fact the record included most of Thomas’ known recordings to that date. I went out afterwards and bought my own copy of the record. It was produced by Caedmon Records, a company that specialized in spoken word recordings.

Years later when I went to England I rode my bicycle from London to Swansea, Wales on a kind of pilgrimage to Thomas’s hometown. I was nearly run over by a student driver in Windsor and had a horrendous climb up a mountain in a coal mining section of South Wales just above Cardiff (I was told later that I should have visited the north of Wales, that the north was much more beautiful). It was an arduous uphill climb but the ride down the other side was a pleasant coast much of the way. But I finally made it to Swansea and the seashore. I went into the local bookshop and bought a copy of Thomas’s poetry so that I would have an edition that came from his hometown. 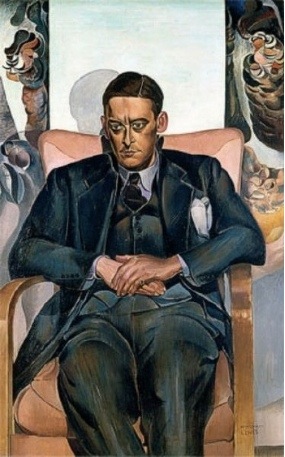 This same professor later checked out recordings of T. S. Eliot reading his poetry and he also gave me my first copy of Eliot’s poetry, a paperback book with a yellow cover that included most of Eliot’s major poems. The critic Edmund Wilson was quoted on the cover of the record as saying no one read poetry better than Eliot. After listening to the recording I thought Edmund Wilson could not have listened to many poets. In any event the recording did not impress me, though I have always enjoyed Eliot’s poetry. What did impressed me was the time the professor took with me and how he cultivated and fed my interest in poetry. I still have the yellow paperback copy of the poems.

I remember the first poem that I read that captured me. I do not know if it is a very good poem, it is often anthologized and it was in my twelfth grade English textbook. It is John Masefield’s “Sea Fever”. I still teach it when I get a class of seniors and I tell them that it is Masefield’s fault I devote as much time to poetry as I do in the classes I teach. I also tell them that I am often moved by poems I do not understand, that the poem makes me feel something but it is difficult to pin down why it makes me feel as it does. I often cannot point to specific passages and explain the meaning of the words in a way that clarifies the feelings evoked by the poem. This is not always a bad thing.

So what is it about poetry that moves people? It never sells as well as fiction, but it does maintain an audience over the years. Bookstores still set aside a section for poetry. People still write poetry. Most of it may come to us through other channels like radio and popular music, but it is always present. And even when it is not highly valued there seems to be an aura about it that leads some to cultivate the “image” of being a poet. There are some that say Yeats wanted to be thought of as a poet before he worked seriously at becoming a poet. 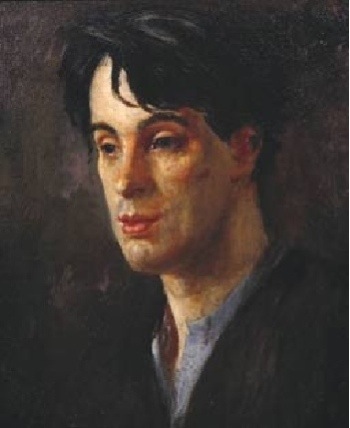 Yeats also represents the power that poetry can wield over a culture. His poems captured the turmoil that produced the emergence of an Irish state. But he did it in a way that speaks to cultures in tumult to this day. He also speaks to those trying to age gracefully and to those who are in love, as well as to the mythology of his culture and of others cultures and what that mythology has to say us about how to live our lives. This is what poets do. In his poem “Lapis Lazuli” he talks about the poets capacity for gaiety. He speaks of Hamlet and of Lear who suffered greatly but whose suffering was transfigured by the gaiety of the poems they recite in their few hours upon the stage.

All perform their tragic play,
There struts Hamlet, there is Lear,
That’s Ophelia, that Cordelia;
Yet they, should the last scene be there,
The great stage curtain about to drop,
If worthy their prominent part in the play,
Do not break up their lines to weep.
They know that Hamlet and Lear are gay;
Gaiety transfiguring all that dread.
All men have aimed at, found and lost;
Black out; Heaven blazing into the head:
Tragedy wrought to its uttermost.
Though Hamlet rambles and Lear rages,
And all the drop-scenes drop at once
Upon a hundred thousand stages,
It cannot grow by an inch or an ounce. (lines 9-24)

Even when the poet is sad there is a celebration somewhere in the language that they use. No matter how tragic the scene, the tragedies growth is stunted by something the poet brings to the event.

Poetry often does not translate well because there is in it a marriage of a specific language to a specific cultural or human experience that often gets lost in translation. The music of the poems is in the words that are used and it is in part the music that awakens the emotions. The ideas that are contained in a poem are often easily captured in translation but the ways the words talk to each other in the poem are often difficult to capture. There was an article in the New York Times Review of Books a few weeks back that looked at how different translators put the words of the Greek tragedians, Aeschylus, Sophocles, and Euripides into English. It was a review of a translation of A House of Atreus done by the poet Anne Carson.

In comparing Carson’s translation with that of other poets and translators there is a discussion of translation and how it is most effectively done. The translators of these plays struggled with the language employed by the original and the language that would most effectively reach a 21st century English speaking audience. All versions had their strengths and shortcomings and none fully succeeds. Perhaps the poetry is a bit like an incantation and it is not enough to get the meanings right but for the spell to work the charm must be spoken in its original language. It is not the ideas that awaken the spirits but something that sings from within the original words. 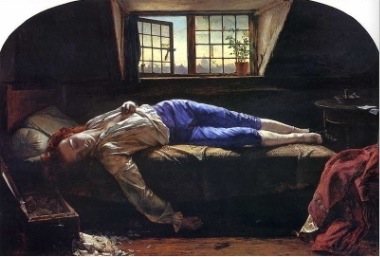 This image of Thomas Chatterton is the stereotype that many carry of the Romantic poet, a bit of tragedy and a noble gesture in the face of a world that does not understand. But one of 20th century America’s finest poets was an insurance salesman, as was one of its finest composers. In the poems of Wallace Stevens it is impossible to read for meaning the way we read an essay or a story. There are images of snowmen, of boats in a harbor in Key West, of cigar rollers and emperors of ice cream. It is very difficult to read the words and find a meaning. But often a poem moves us long before we understand it.

I was moved by The Waste Land the first time I read it, but to this day I do not know precisely what it means. I know mostly how it makes me feel and how the images and symbols and other tricks of language help to shape that emotion. But it is not like “The Gettysburg Address” where a word can be seen to mean a specific thing and to contribute a specific idea to an overarching argument. The mind plays a part in untangling the mystery in a poem but in most cases the mind must listen to the heart if it is to find meaning.

That poetry can move people to do things that they would not do if they were thinking clearly is attested to by this ad. It uses the poetry of Dylan Thomas to sell automobiles. I do not know how successful the ad campaign was, but the ad itself has a beauty to it that is enhanced by the power of Dylan Thomas’ language. Poetry often wins people over and the poet has a power. The skaldic poet Egil Skallagrimsson wrote a poem in praise of a king he despised in order to escape execution. The poem was so finely done the king had no choice but to let Egil go. Once free Egil created a different kind of poem, a curse, that expressed his actual feelings.

This week’s New York Times Review of Books, no doubt because April is poetry month, ran an article on memorizing poetry. The article is titled “Got Poetry” and was written by Jim Holt. At the end of the day the only reason to memorize poetry, according to the author, is because of how it changes the memorizer and brings the poetry to life inside the mind. Reciting a poem from memory is vastly different from reading it off the page. He mentions the suffering that English teachers of his generation inflicted upon students by requiring them to memorize large chunks of poems the students did not really understand. This sort of memorization is rarely fruitful and is often no more successful than requiring students to memorize words for a vocabulary test, once the exercise is finished the memory begins to go blank.

For a poem to live in the imagination it does not really need to be understood, but it needs to be valued and attention needs to be paid to how the poem is working on the imagination. Poetry ought to be an essential part of any curriculum, or so I believe. I think poetry trains the mind and the imagination to work in ways that prose fiction or non-fiction cannot. There are many English teachers who do not agree; that think studying a poem kills the poem. There is truth to this, but it is a statement that is equally true when applied to the teaching of any text and there are some that think the English classroom should focus only on writing and leave the teaching of literature to others.

I think that poetry touches us in ways that other writing does not. Whether the magic resides in the rhythms and meters, in the rhyme, or in the sound of the words themselves I do not know, it probably involves all these things. I think this love of poetry, though, is a relationship that needs to be cultivated; it does not happen of itself. There need to be introductions, a period of liking and friendship and getting acquainted, and then perhaps a betrothal. It is very like a courtship.