Words in Their Finery 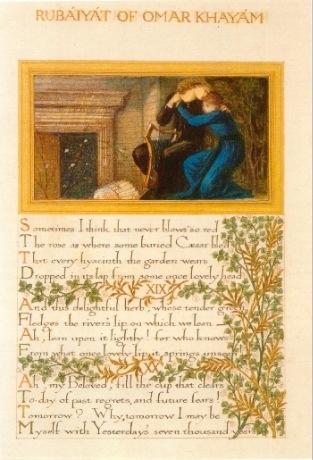 The image is from an edition of the Rubaiyat of Omar Khayyam designed by William Morris and Edward Burne-Jones. We can see in this image that the beauty of words and of language lies not solely in what the words mean but in their appearance as well. Or at least that words can have a beauty that is independent of the meanings assigned to them by Dr. Johnson or Noah Webster. Morris realized that even if Chaucer had been an inferior poet the Elsmere Manuscript would still be a thing of beauty and worth preserving. The creating of typefaces is an art in itself and the quality of a typeface contributes to the pleasure derived from reading books. The song says, “momma may have, poppa may have, but God bless the child that’s got his own.” In a work of literature the author and the words used by the author may be the momma and the poppa of the story but the typeface has its own something to offer. The texture and quality of the paper and the design of the letters on the page contribute something important to the experience of reading a book.

When students write a paper they often want to use unusual, decorative fonts. This has to be discouraged, of course, because those students that go onto college will have professors who are not likely to appreciate papers that stray too far from the conventional in their use of fonts or typefaces. It is unfortunate that one of the stories we have to tell our children is to be careful of the clothes in which they dress the stories that they tell. Though the decorative fonts used by students in term papers are often garish and inappropriate to the stories that they tell, these fonts are none the less a part of the student’s expression and reveal a bit of her or his imagination at work. If the design of a thing is as important, some say it is more important, than the task the thing has been given to perform than fonts chosen by students reveal something of their imaginative life and they are certainly an important part of the design of the paper in the student’s mind. 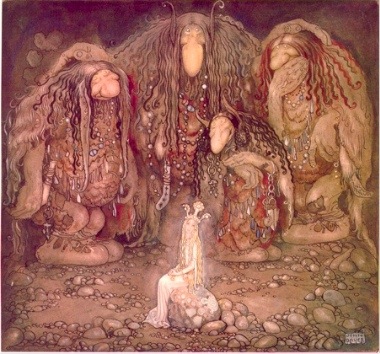 There was a recent article in the Boston Globe, “How fairy tales pit adults against kids,” about fairy tales and the stories that they tell. The point of the article is that these stories are often seen by adults as dangerous and that in the stories themselves adults are often portrayed as the enemy or at best more of a hindrance than a help. Because the first audiences for these stories were adults one wonders how the adults that enjoyed them viewed children and childhood. There is a short story by H. G. Wells, “The Magic Shop,” that follows in the vein of some of these stories in that by the end of the story a child’s parents live in terror of their child. Wells’ story actually reverses the roles of adults and children in the traditional stories. In stories like “Sleeping Beauty” and “Hansel and Gretel” it is the children that live in fear of the adults. Wells’ story, though, ends less happily for the adults than the traditional stories do for the children in that in the traditional stories the children overcome the malevolent adult forces, in Wells’ story the malevolent child is still in control when the story ends.

Language is a magical tool. The same words can be employed by different people to convey very different messages. In fact, the same words in a single text can even be interpreted by different people to convey very different messages as well. I introduce my students to literary theory by showing them how The Tale of Peter Rabbit can be interpreted as a story about the importance of listening to your parents when read one way but also about the importance of disobeying your parents when read another way. This suggests perhaps that we take from the stories we read the messages we need to find in them in order to live more effectively. Does the author put meaning into a story or do readers place in them the meanings they need to find. This is perhaps the crux of the postmodern problem, does meaning exist, does meaning matter? And if meanings do exist and meanings do matter, who gets to decide what those meanings are and where and how those meanings are found? 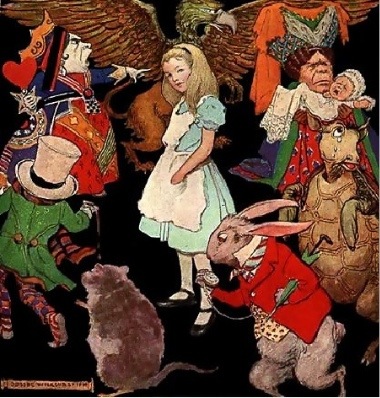 Alice surrounded by the characters of Wonderland
Peter Newell
http://en.wikipedia.org/wiki/File:Alice_in_Wonderland.jpg

Perhaps no book has as much fun with the “meaning” of things than Lewis Carrol’s Alice books. Humpty Dumpty tells us words mean whatever we want them to mean. There is truth to this of course, because this is how new meanings to old words evolve and new words are invented. It is also how poets employ words. Anyone who has read a poem by Wallace Stevens or Bob Dylan has encountered this amorphous use of language. I often imagine that “Pale Ramon” struggles as much with meaning as he does with order in Wallace Stevens’ poem.

There were two article recently, one in the Washington Post, “Michael Dirda reviews the biography “The Mystery of Lewis Carroll,” by Jenny Woolf,” and one in the Guardian, “How the devastation caused by war came to inspire an artist’s dark images of Alice,” about the Alice stories and their creator. The Guardian article focuses on the illustrations that Mervyn Peake did for these books. He, a bit like Humpty Dumpty perhaps, in that he brought his experiences as a war correspondent during World War II to his interpretation of Carroll’s text through the illustrations he created. He makes the text mean what he wants it to mean, which in many ways is not unlike Carroll’s meaning. Carroll depicted a world at times in chaos due to the ways in which adults employed power, Peake was placed in a world where this chaos was brought to life.

Dirda’s review discusses a book about Carroll that focuses on Carroll’s conventional and unconventional qualities, part Mad Hatter and, perhaps, part Alice, who seems to me to be the most conventional character in the story; a conventional young lady to whom very unconventional things happen. The story often revolves around a deep desire to find meaning and order in a world in which none appears to exist. Though of course Carroll, a mathematician, has created a world with a chaotic zaniness on its surface that conforms, under the surface, to a fairly precise mathematical structure. Perhaps life, when looked at from within the experience of the person living it, appears random and bewildering, when it is in fact orderly and systematic when looked at from the outside, as from within our experience our planet and solar system is the center of the universe, but when looked at from a different vantage point our planet and solar system are found nearer to the edge of the universe. Our point of view and our understanding of reality are shaped more by our vantage point than by the context of that vantage point in the larger universe. If we do not know where we stand we will not be able to properly interpret what we see.

This is the version of Alice in Wonderland that I grew up with, though how I viewed it as a child was very different from how I viewed it as a young adult. As a child in the 1950’s I saw it as a magical story with odd characters and vivid colors, but as a young adult in the 1960’s it took on shades of psychedelia. Vivid colors and the caterpillar’s hookah took on different connotations. The world of the 1960’s offered a very different vantage point from that of the 1950’s, though the different lenses through which I viewed the film may have had as much to do with my age than with the age in which I lived. I wonder how the counter-culture of the 1950’s viewed the film.

W. H. Auden once said, “There are good books which are only for adults because their comprehension presupposes adult experience, but there are no good books only for children.” I believe this is true, but I also believe that adults read children’s books with adult experiences that often shape the way these stories are perceived and they are changed by the adult mind into something different from what they where for the child that first read them. “The Little Engine That Could” and “Stone Soup” have different meanings for me now than they did when I was a child. I enjoyed how the soldiers tricked the townspeople in “Stone Soup” but I did not fully comprehend the point it made about generosity. In fact my views of generosity may have been shaped in part by this story without my being fully aware of how my views were being formed.

There is a Woody Guthrie song, “Pretty Boy Floyd” that talks about the outlaw leaving money under the supper dish after he has been given a free meal. I think stories often work this way, there is a gift left under the surface of our consciousness that we are often unaware of until long after we have enjoyed the story’s telling and the magic of the narrative has faded a bit. Sometimes we come back to the stories we read as children and find the messages that have shaped us and we are not always pleased with the way in which our views have been manipulated. This is the rhetorical nature of story telling. We are taken to a world that operates according to certain rules and we learn these rules as we journey through this world, but we bring them back with us to the world of our day to day lives.

Illustration of Alice with the White Rabbit
Arthur Rackham
http://en.wikipedia.org/wiki/File:Rackham_Alice.jpg

The White Rabbit tries to live in Wonderland according to the rules of Victorian English society and he is somewhat out of place there. The rules of Victorian England did not apply in Wonderland, or perhaps they did but without their veneer of respectability. What happens to Victorian society, or any “respectable” society, if the rules encountered in Wonderland are brought home to the world on the other side of the looking glass? Which looks quirkier the rules seen in their true light or the individual just back from Wonderland confronting those rules? Sometimes stories do this, they open our eyes to the way things truly are, but in opening our eyes put us at odds with our neighbors whose eyes remain closed and who do not wish to have them opened.