From Desperados Waiting for a Train
Jerry Jeff Walker

Famous for Being Faithful 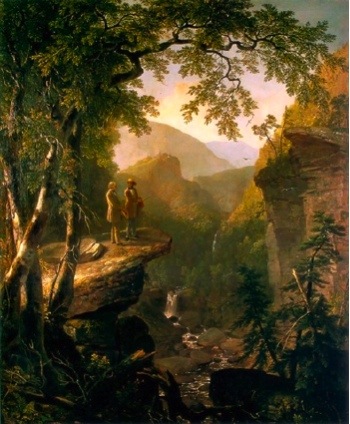 The song is about the friendship between a young boy and an old man. The boy is, I imagine, as energetic as you would expect any young boy to be and the old man less energetic than you would expect most old men to be. Yet the boy hangs around with the old man. The title, “Desperados Waiting for a Train” lends an aura of western romance to the relationship. The boy and the old man are not doing anything, just as desperados “casing” the train station in preparation for a robbery do not appear to be doing anything. But the boy and the old man are friends and the friendship makes the sedentary passing of time worthwhile.

The painting idealizes the friendship between Thomas Cole (a friend of Asher Durand who did the painting) and the poet William Cullen Bryant. It imagines a meeting of the two friends in a real place that was important to both. The “place”, the Kaaterskill Falls region of the Catskill Mountains, though, is not painted as it was but as it was remembered many years after Durand had visited the region. The occasion for the painting was the recent death of Thomas Cole. Cole is credited with establishing the Hudson River School of painting, of which this painting is one of the most famous representatives.

The painting was done as an act of friendship on the part of Durand for his friend Thomas Cole and is a remembrance of him. The painting in turn commemorates Cole’s friendship with Bryant. The Hudson River painters, in turn, pursued a friendship of sorts with the environment of Upstate New York (though this love of landscape was exported to other parts of the United States and the world). I suppose that in part this is what friendship is, a commitment between two people that is experienced in the real world, with all the pressures and beauties that the real world brings with it.

The setting of the painting is beautiful; it captures a wilderness, even if it is a wilderness romanticized by memory. Danger and unpredictability are aspects of a wilderness. It is in times of danger and the unpredictable, especially the unpleasant side of the unpredictable, that a friendship is tested. Teddy Roosevelt said, “It is better to be faithful than famous.” This is especially true of friendship and where this is not true that friendship has likely become tainted with exploitation on the part of at least one party to the relationship. 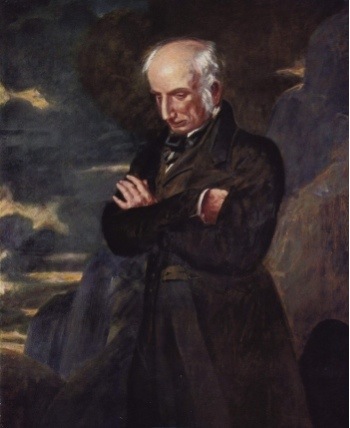 There are many examples of literary friendships, some of which did not remain friendly. Joyce’s treatment of Sylvia Beach comes to mind as well as Hemingway’s treatment of just about every literary friend who helped him get his first books published. One of the most productive literary friendships was that between Samuel Taylor Coleridge and William Wordsworth. These two men essentially began the Romantic Movement in England with the publication of their book Lyrical Ballads. The friendship had its strains and eventually came apart. As the two paintings suggest both these poets had a melancholy side to them and melancholia can put a strain on a friendship. Coleridge also had other problems that made him a difficult friend. 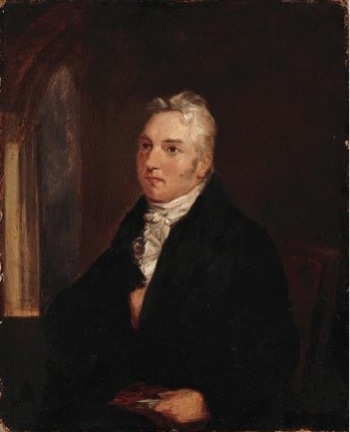 Stories help us to define values and concepts. One of the ways we come to understand the true meanings of words and the ideas and values those words stand for is through the stories that we read. We see friendship defined in Huck’s relationship with Jim, a friendship that should never have happened inside the culture from which it evolved. When Huck says he is willing to go to Hell rather than betray a friend he is not speaking figuratively. He has been raised to believe that he will literally go to Hell if he continues to help Jim and does not turn him in to the authorities. Define Hell however you will, are there many in your life that you would risk that consequence to protect.

Huckleberry Finn comes from the literary tradition of the picaro and The Adventures of Huckleberry Finn is a picaresque novel. A picaro is street urchin who must survive by his wits. He is inventive, resourceful and shrewd. The tradition began (or at least it was given its own name as a literary genre, though I think the type is probably older) with a Spanish novella by an anonymous author called La Vida de Lazarillo de Tormes. Lazarillo had few friends and survival depended on trickery, “street smarts”, and persistence, many of the same qualities we find in Huck Finn. Huck, on the other hand, is rich in friends. There is Judge Thatcher, Tom Sawyer, and the Widow Douglas, all willing to do most anything to help him out. It is Tom, in fact, who gets Huck to go back to the Widow Douglas’ house to live. Tom is forming a gang of robbers and Huck can only become a member by letting the Widow Douglas make him respectable. 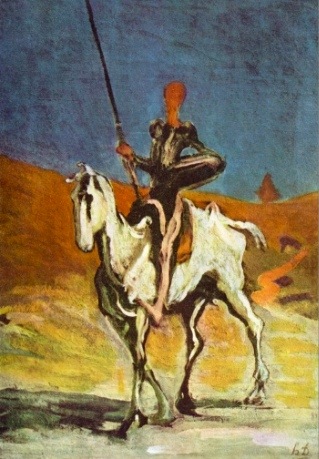 Another famous friendship from the picaresque tradition is that between Don Quixote and Sancho Panza. In the painting Don Quixote is seen in the foreground and Sancho seems to be missing, but if you look carefully you can see Sancho off in the distance hurrying to catch up. Of the two it is Sancho that is the most like a picaro, but neither the Don nor Sancho are young urchins. Quixote takes to living by his wits in order to make the world nobler; a place where folks like Lazarillo can live more honestly and more humanely. Sancho watches out for Don Quixote and keeps him from getting into too much trouble, or helps the Don escape when he has gotten into too much trouble. The two are technically master and servant, though Sancho is perhaps, more an apprentice than a servant in that he is Don Quixote’s squire and a squire is a knight in training. 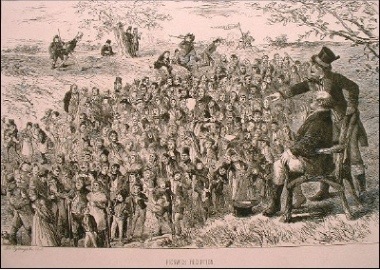 Sam Weller is another famous friend who doubles as his friend’s servant. He looks after Mr. Pickwick in much the same way Sancho looks after Don Quixote. Like the Don, Mr. Pickwick is a man in great need of someone to save him from himself and that is a task that Mr. Weller performs very well. Both Sam Weller and Sancho Panza are paid for their services (or at least promised payment at the end of the adventure) but both do what they do not for the paycheck but out of friendship. Those who have read both The Pickwick Papers and The Lord of the Rings will recognize a bit of Sam Weller in Samwise Gamgee, Frodo’s friend. Both Sam and Samwise are full of worldly wisdom and useful aphorisms (most of which have been learned from a wise parent) to fit most any situation. Though there is not a “cockney” district in the Shire Samwise would probably feel right at home in the markets of Covent Garden.

This tradition of the resourceful servant reaches a pinnacle of sorts in the Jeeves and Wooster stories of P. G. Wodehouse, though neither Jeeves nor Wooster were likely to regard the other as a friend. What Sancho and the Sams did out of friendship Jeeves performs as a professional service. Wooster can fire Jeeves at a moments notice (and does on a few occasions) and Jeeves is free to leave at a moments notice. Jeeves also performs his duties with a bit more sophistication than do his more rustic counterparts. One gets the impression at times that Jeeves not only surpasses his master in common sense but in education as well. Jeeves also embodies the essence of literacy in that not only is he knowledgeable, but he can put that knowledge to practical and effective use.

This film shows friendship taken to another extreme. The Three Stooges, it is clear, are good friends. The Marquise de Sevign said, “True friendship is never serene.” The Three Stooges live out this principle in each of their films. They stick together through thick and thin and a great deal of choreographed abuse. Whatever the hardship, they endure it together and that after all is a large part of what friendship is, enduring together. Robert Frost in his poem “Provide, Provide” suggests the only friends that can be relied upon are those that are bought and can be paid for on a daily basis. The Stooges suggest not only that friendship is not a commodity, but that it willingly endures suffering (largely of their own making) and sacrifice. 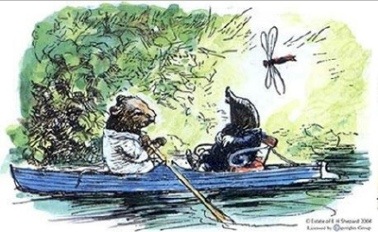 For me, though, friendship is seen at its most exemplary in the children’s book The Wind in the Willows. Ratty and Mole are kindred spirits that endure much together, much that is pleasant and much that is trying, especially on behalf of another friend, Mr. Toad. The author of the book, Kenneth Grahame, would be celebrating his 150th birthday this year if he were still with us. To acknowledge this Katherine A. Powers devoted her column, A Reading Life in last week’s Boston Globe to the book and to two new editions of the book. The two new printings are annotated editions of the story and they sound colorful and interesting, even if, according to Powers, they miss the meanings of some of the commonplaces of Edwardian daily life that are found throughout the book. It is the friendship, though, that makes the book remarkable for me. Friendship is something everyone craves and needs but real friends are often difficult to come by. As a result the story resonates.

C. S. Lewis in his book, The Four Loves, discusses the role of love in our daily lives and the life of the culture(s) in which we live. In it he describes each of the four Greek words for love. One of the four loves, phileo, is friendship. According to Lewis this is the most unnecessary of loves, in that it does not have any “work” to do, society and its institutions do not need friendship in order to survive, as a society needs well behaved, well brought up, and well provided for children in order to survive. Friendship exists for no other reason than the relationship itself.

I am not certain that this is entirely true, but it does underscore an aspect of friendship and that is whether the relationship is like that of Ratty and Mole or that of The Three Stooges, all parties are free to leave whenever they choose but for however long the friendship endures, they choose not to. But what is more, the friendship is only a friendship as long as it is pursued out of a love for the other and not out of a sense of duty (though that may enter in from time to time). There can be no obligation in a friendship, only desire.