Life in Miniature, or Making Much of Very Little

The music of John Adams has always aspired, or so it seems to me, to do a lot with very little. There is not much variety in its instrumentation or in its use of the musical scale, but the music has succeeded over many years to draw listeners into the worlds that it creates. I will sometimes give my students an exercise where I ask them to write me a three or four page paper on the Ezra Pound poem “In a Station of the Metro.” The poem is short:

THE apparition of these faces in the crowd;
Petals on a wet, black bough.

It is an imagist poem intended to suggest a Japanese haiku. I suppose a student could manage a page and a half or so on background information concerning the imagist movement in poetry and the haiku as a poetic form. And that is the point of the exercise; in order to write a lot about a poem this short it is necessary to say something about background and influences. But there are other things that could be done as well. What is suggested by the word “apparition”? What is the “Metro” and why make the metro station the subject of the poem? What does the last line suggest? The Wikipedia article on this poem suggests that Pound is playing with the sonnet because the first line has eight words and the second line has six, mirroring the sonnet form of fourteen lines with a turn between the first eight lines and the final six lines. The point of the exercise is that often quite a lot of meaningful stuff can be said about a poem of two lines and a mere fourteen words.

The Paris Metro itself is something of a story in “smallness” or at least short distances. Every building, or so the Paris promotional blurb suggests, is 500 meters from a metro station, meaning that everyone in Paris is within walking distance of a subway station. Being such a convenient rapid transit system it has always attracted a large ridership. And perhaps these riders are the “petals” on the “black bough” and the ghosts that haunt the Metro. The Metro signs, as seen in the photograph above and other aspects of the stations are done in the “Art Deco” style of the time in which it was built. Perhaps this too was something Pound found attractive. 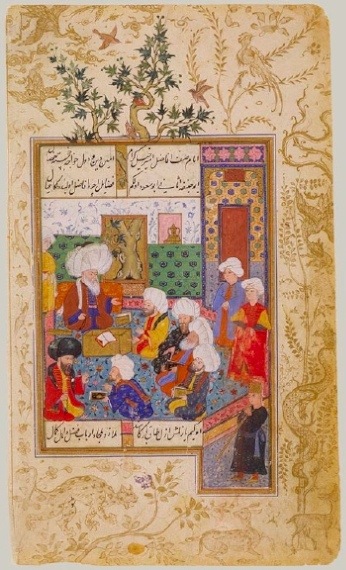 The painting above and the carving in ivory below point out other ways in which smallness can be beautiful and deeply evocative. Each of these works is rich in symbolism, and imagery. They both tell stories that the viewer can follow even if they do not have access to a written text. Many of the miniatures painted by Christian artists to fill books of hours, early prayer books, told the story of the accompanying text. The paintings often served a purpose not unlike the illustrations that make up comic books or graphic novels, to tell visually the story that is told in the written text, though in comics and graphic novels the text and the images share the narrative burden as opposed to each telling the same story in a different medium, as is the case with a conventional book of hours. But what I find attractive is how so much meaning is gotten into such a condensed space.

The painting above is an Islamic miniature, a style of painting popular in Persia in the thirteenth to the sixteenth centuries. What is intriguing about these paintings, at least to me, is that they come from a culture that eschews representational art, seeing it as being a bit idolatrous. The artwork found in a Mosque, for example, is non-representational and of a highly geometric quality. In fact, if we look at the interior decorating that is captured in the painting we notice that it is geometric and conforms to our cultural expectations. But then art should surprise us and do the unexpected. 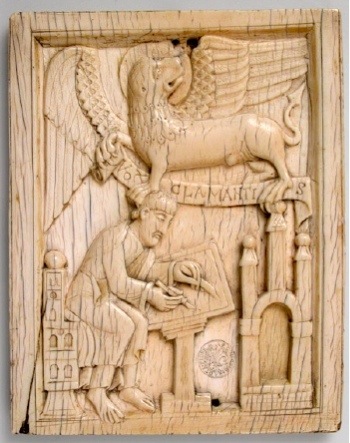 It is often the little things that matter most in our daily interactions with one another. It is often enough to be kind and courteous which comes at no real cost to us, though they may not be in practice “little” things. There was a review of a number of books on etiquette, “Can’t We All Just Get Along?”, in this week’s Washington Post. The reviewer did not really like any of the books that he looked at and came to the conclusion that those most in need of reading them were the least likely to give them a look. This is no doubt true. Courtesy requires a bit of selflessness, a conscious awareness of those around us and their worth as fellow human beings. Discourtesy is, among other things, a sign of self-absorption, though it may just be a temporary lapse due to a poor night’s sleep or something. Those that are insolent in their treatment of their neighbors probably approach their neighbors, at best, with indifference. Sometimes the little things require more than some people are capable of giving.

The film is a “small” film in the sense that all the action takes place around a dinner table in a restaurant. The two characters in the film are two New York writer/actors Wallace Shawn and Andre Gregory. The movie is a conversation about the world and where it is heading. This part of the film focuses on boredom and its consequences. Boredom puts us into a stupor where we will agree to most anything, especially if it promises momentary relief from the boredom. In some ways it seems prophetic, the film was made in the early 1980’s, though it may just be rehashing old ideas in a new medium.

There is much in the film that gives a sophisticated spin to aspects of the “hippie” philosophy and much that is probably a bit naïve. But it is certainly true that the film is difficult to enjoy for a person who is not excited by ideas even if the ideas are beginning to show their age a bit. There is no spectacle, there are not really any raised voices or raised fists. The two men are friends and they are enjoying each other’s company and the conversation, though there may be an undercurrent of competition, an effort on the part of each to dominate the conversation, as Andre Gregory does in this brief clip. But it is a friendly competition and each can be seen to be taking the other very seriously. 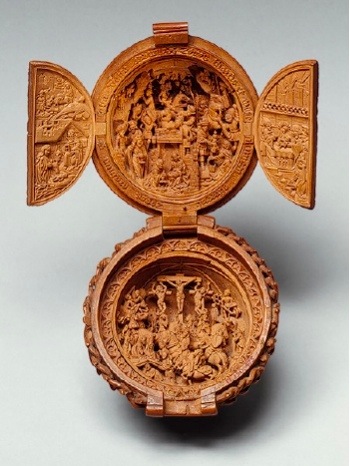 Spectacle can overwhelm us with the power of its images and the force with which it assails the senses. Miniatures surprise by how much is crammed into a small space; it is spectacle of a different kind. The rosary bead above is only two and a half inches in diameter and yet it contains the heavens and the earth. In a world of super sizes the miniature may fail to impress, many may not take the time necessary to see the detail that is present in the carving. Impressed or not, there is much that can be said about this little bead and all the images and symbols that it contains. The bead is part of a string of beads that are intended to aid in prayer. And prayer, if nothing else, takes us out of ourselves and reminds us that there are forces that are greater than we, they may be impersonal forces like those that work in nature to produce evolutionary change or they may be something more powerful and personal, that, of course, depends on the beliefs of each individual looking at the bead. 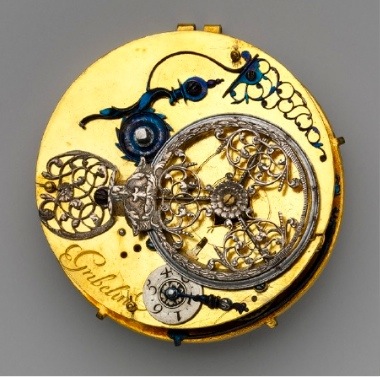 The workings of a watch must be small and delicate by definition because the watch must be able to fit into a small place, a pocket or a person’s wrist. The details of the watch are intriguing in their design but the wonder of the watch is in the work it does. When manufactured well and maintained well it keeps accurate time as time passes, it was, after all, a watch that enabled European sailors to find latitude at sea precisely because it kept precise time over a great expanse of time. It is usually the little things that separate a great work from a mediocre one. It is the ability to see nuance and subtlety in a poem or a laboratory experiment that separates the true scholar from the dilettante. To see subtlety and nuance, though, the eye and the mind that operates it must be observant and take some delight in its ability to observe the littlest of things.