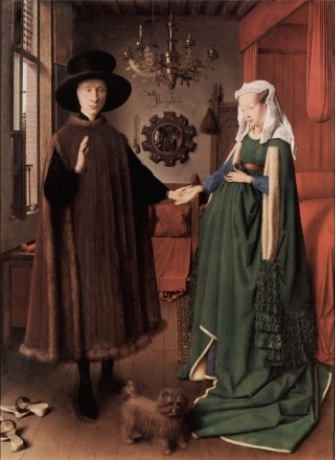 The song celebrates the child that knows what she or he wants and is able to get whatever that is. The lyric just says “God bless the child that’s got his own” but I think the thing to have is self-knowledge and the skills necessary to achieve the heart’s desire. Perhaps the song means something different but that is what I think. In an English class the thing to have is the ability to use language well, or the potential that can be shaped into that ability. Not everyone in English class aspires to be a writer, but the English class aspires to make competent writers of everyone. The goal may be seem an unrealistic one to the student, one that makes too many demands on the student, but it is seen as an achievable goal by most English teachers.

Writing as a craft or an art is a very different thing from writing as a skill. I have great admiration for anyone who can tell a story and has the discipline to put that story into a book and then to get that book published. It is a thing that is very difficult to do. There was an article in The Guardian this past week about the writer Dan Brown whose new book The Lost Symbol was published this past week. The article, “True confession: I don’t hate Dan Brown”, is about the reaction Dan Brown’s books often receive from those that write “literature” or “serious fiction and/or non-fiction.” The author of the article, Jean Hannah Edelstein, does not care much for Brown’s books, but is grateful that he brings people into bookstores and gets people excited about reading who might not otherwise get excited about reading and some of these people will go on to read “serious stuff.”

The painting suggests the importance of craft and discipline for the artist. It is a realistic painting that attempts to capture the reality of the scene it portrays down to the reflection in the mirror at the back of the room. The painting, I was told once in an art class, was a kind of marriage certificate and that the scene was not in fact a realistic portrayal of the people in the painting, but a goal for their marriage. The woman in the painting is pregnant. According to the story told by my art teacher she was not in fact pregnant at the time the painting was done, but that was the couple’s hope for the near future. But that said, the painting looks real and is meticulous in its attempt to capture all the little details of the room and the people in it (and also the dog). For the artist that painted the painting this may have just been a commission, a piece of work over which he had few feelings beyond the receipt of his fee. His subject, after all, was chosen for him.

The artist, whether a writer, a painter, a musician, or a worker in some other medium, has to find a balance between passion and polish. If the subject is chosen for the artist, the task becomes one of finding the passion that will give life to the work. If the subject is chosen by the artist passion is probably not the problem, the problem is finding the discipline and the skill to shape that moment of passionate inspiration into something meaningful and “finished.” Wordsworth defined poetry as “emotion recollected in tranquility.” This suggests to me that the effective poet is able to capture an emotion after that emotion no longer has power over her or him; it is a recollection of an emotional moment after the moment has passed. This recollection must evoke the emotion in the poet without the poet being dominated by it.

The Dot and the Line
Metro-Goldwyn- Mayer
The film captures the essence of artistic discipline. The squiggle is inspiration without form or control. The line, on the other hand, was uninspired but in firm control, at least initially. He is not without passion; he just does not have the tools to give expression to his emotions. The line, though, finds inspirations and brings control and form to that inspiration. He is in the grips of a powerful emotion, love, and while he uses that passion to inspire his work and to motivate him to do his artistic work, the passion does not control his expression. This is, I think, the essence of the artist’s struggle, though, the degree of freedom from that passion may not always be absolute. There may be a conversation between the passion and the intellect that controls the process and polishes the rough edges.

In this film depicting a painting expedition of Vincent Van Gogh and Paul Gauguin it is clear one painter is in the grips of passionate inspiration and the other is not. Gauguin paints deliberate lines and is in absolute control of what he does and what he does has little interest to the viewer. Van Gogh on the other hand seems to be in the grips of powerful emotion and his end product is one the viewer wants to see in greater detail than the glimpse that is given. Van Gogh helps himself control the process by constructing a kind of grid through which he looks but other than that he creates with a good bit of spontaneity and freedom. 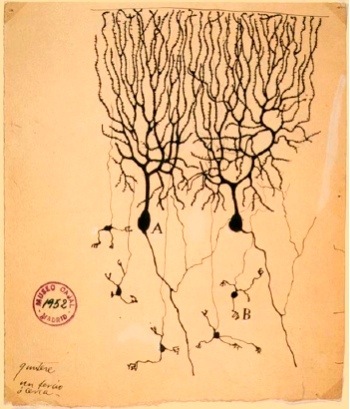 The painting below and the drawing above both use lines on a piece of paper to suggest the way things work. The image above attempts to illustrate the workings of a pigeon’s brain. The image below depicts the norns, characters from Norse myth who, like the fates in Greek myth, weave a person’s destiny. The lines that run through the drawing are the threads that will make the tapestry that will capture the destiny of the tapestry’s object, the person whose destiny is being cast. I wonder if there is a connection between the lines that illustrate the synapses of the brain and the lines in the tapestry that illustrate a person’s fate.

I have always enjoyed stories that are illustrated. I think the illustrator’s art often adds new dimensions to the storyteller’s art. These dimensions are not always found in the story but if the illustrations are done well, these dimensions were certainly evoked by the story. Tolkien said that he removed a giant’s shoes because he liked the illustration of a barefoot giant more than his description of the giant wearing boots. Sometimes, evidently, the illustrator may influence the direction aspects of the story take. On the other hand there is the story of Seymour. Dickens was hired to write a story around the popular artist’s illustrations. The public, however, preferred Dickens’ story to Seymour’s drawing and Dickens was given the freedom to take the story where he wished. The humiliation led to Seymour’s suicide. Art can be a dangerous business. 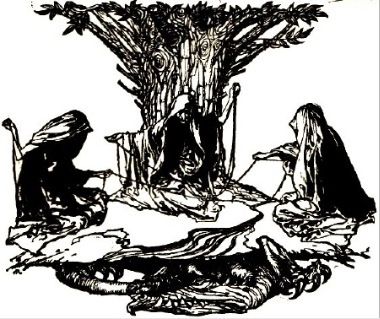 There was an article in the Boston Globe this weekend about books and music and how books rarely evoke music. The article, “Pynchon on shuffle”, was about how Thomas Pynchon created a soundtrack of music from the 1960’s to play behind the events of his story. Most of the songs are real and those who lived through this moment in time recognize them, but many are of his own invention and serve his artistic purposes. But why is it that some art forms are more friendly with one another than others. Why do words and pictures go together so well, and why do words and music when joined in song go together so well, but not words apart from music, words that are not sung but only evoke what might be sung?

I do not think there should be such antipathy between the written word that might be spoken and the written word that was written to be sung. There is often music in the sounds of words and many books to be fully appreciated need to be read aloud. We expect this to be true of poetry but it is often true of prose as well. I think, for example, The Great Gatsby is a very musical text when read aloud. Storytelling began as a spoken art, we ask someone to “tell” us a story and not to “write” us a story (unless of course we are English teachers). The first stories, The Iliad and The Odyssey for example, were not written down until much later, originally they were performed, sung, to their early audiences. Perhaps one day, when the technology allows, books will have their own internal jukebox so that they will sing to us again. 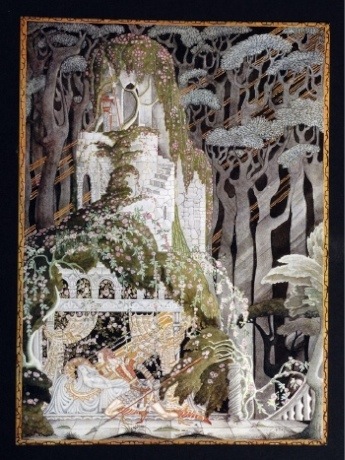 I have always enjoyed the illustrations of Kay Nielson. In this image from the Grimm’s Brother’s story of “Snow White” or “Rosebud” as they called it (or at least as it was called in this edition of the tale), we see an overgrown castle and a prince awakening the sleeping princess. The lines appear in the background and I wonder if they are not the threads of fate woven by the norns in the earlier illustration. Perhaps they are just shafts of light suggesting the first light of morning but they add a nice stylized touch to the image. And being a picture of Snow White, it is difficult not to imagine the story without the soundtrack of the film playing in the background. The title of the painting also evokes another film, a different kind of fairy tale, Citizen Kane, a film in which a different rosebud had a place of prominence. Music and story may not be intimate friends but as stories become films their soundtracks, the music that plays behind the action, become a part of our experience of the story and are often difficult to separate from the story when we are getting the story from the printed page rather than from the silver screen.

Again, though, is the art of the cinema an art that proceeds from passion, as with Van Gogh and his painting in the film clip earlier, or is it one that proceeds from commission, like the painting at the top. A director does not always chose his scripts; actors do not always chose their roles. What part of the process is passion being controlled by a disciplined mind and what part is a disciplined mind seeking out the passion. Can art be the product of a dispassionate process that exerts the artist’s skill on the process without the artist’s emotional involvement? Can the artist be emotionally detached from the work and still produce a work of artistic merit? Can a work of artistic merit be produced without emotional detachment? How much of this painting is unbridled passion and how much is careful control of the painter’s medium? The painter’s emotions emanate from this painting, but the painting is not a squiggle, there is a disciplined hand at work.