When All the World Is Young, Lad 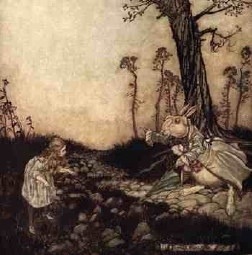 The song describes the wonder that a child felt upon receiving a strange toy. The toy has no real purpose and it isn’t even clear how one is supposed to play with it, but the way the toy behaves creates its own magic. This is, I think, how stories often work. We are not exactly sure what we are supposed to get from the story, we only know that we are bewitched. I also find much of this same magic in the illustrations that often accompany children’s stories. Arthur Rackham’s illustrations of many children books (and many adult books) have defined the characters in these stories for me as in the scene above from Alice’s Adventures in Wonderland. The illustrations define Alice and the White Rabbit for me as well as some of the mystery of “Wonderland.” The trees and stones in the scene have a life of their own, the landscape almost becomes a character in its own right.

The stories we read as children profoundly influence the adults we become, and not always in the way the stories may have intended. Adults looking back at what they read as children sometimes feel a bit betrayed when they discover the hidden morals or a subversive kind of preaching in the story telling they never realized was there as children. I have heard this said of C. S. Lewis’ Narnia Chronicles. In fact, Philip Pullman wrote the trilogy His Dark Materials as a kind of antidote to the influence of Lewis’ books. But I wonder if the children reading his books are any more attuned to the hidden messages than I was as a child to those concealed in the Narnia stories. I think children often experience books differently than adults and ignore the preaching (and ignore the books themselves when the preaching becomes too overt).

I was looking at the children’s book section of The Guardian this weekend and it got me thinking about children’s literature and its importance (at least it was important to me). Graham Greene said of the books we read as children:

Perhaps it is only in childhood that books have any deep influence on our lives. In later life we admire, we are entertained, we may modify some views we already hold, but we are more likely to find in books merely a confirmation of what is in our minds already: as in a love affair, it is our own features that we see reflected flatteringly back. But in childhood all books are books of divination, telling us about the future, and like the fortune-teller who sees a long journey in the cards or death by water, they influence the future.

I think there is truth to this observation. I think a child has a greater capacity to believe in the world the author has created and the characters, no matter how far fetched, are more easily accepted. I am not sure that a child looks at the Cat in the Hat as a character in the same light as an adult. And like the marvelous toy of the song a story can spin its magic and carry away the child (and sometimes the child within the adult) to places that can only be real in the imagination.

Adults often look down on the books that children read and treat them as a second rate form of literature. It has been pointed out by many (J. R. R. Tolkien and C. S. Lewis among others) that the fairy tales often told to children in the nursery were originally told to adults and were later, like hand me down clothes, bequeathed to the children. W. H. Auden once observed, “There are good books which are only for adults because their comprehension presupposes adult experience, but there are no good books only for children.” I think this is also true. The literature we read as adults often employ a vocabulary beyond the average child or involve events or sensibilities that can only be appreciated and understood by an adult reader.

But though the vocabulary may be simpler and the elements of the story more accessible to the young mind, the quality of the writing must be able to hold its own. Most children’s literature, like most adult literature, does not survive the generation for which it was written. Those children’s books that survive, like their adult counterparts, have something of literary merit in them that is not defined by the moment of their making.

Perhaps books I read as a child, like Stone Soup or the stories of Dr. Suess only continue to enchant because of the memories of childhood that they evoke, though I think there is more to it than that and that the language of the stories have an enchantment that is all their own, an enchantment I still found in certain stories written for children that I did not read until I was an adult.

The Wind in the Willows – Courtroom Scene

One of my favorite children’s stories is Kenneth Grahame’s The Wind in the Willows. As a story it defines friendship, loyalty, and the importance of maintaining a sense of spontaneity and adventure in our daily lives. I am not certain at what point I became an adult (I have serious concerns that perhaps I never have) but there are times when I read a story that I am captured by it in the same way I was captured as a child. I like to tell people that the passage of time makes me grow older but no power on earth can make me grow up. But it may be, as Graham Greene suggests, that the stories that I think are moving me as I was once moved as a child are only in some way flattering me by endorsing a world view I hold, where when I read as a child I did not have a world view to flatter. 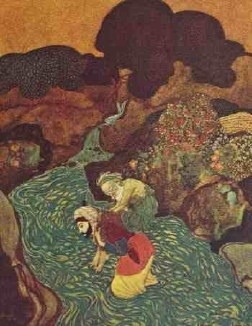 One of my earliest memories of being captured by a book was of the Thousand and One Arabian Nights. My parents had books around the house, mostly in the living room. For a time they subscribed to the Heritage Book Club and would receive from time to time illustrated editions of classics like Moby Dick and Frankenstein. One of the books they received was a three volume set of Richard Burton’s translation of The Arabian Nights. The language, of course, was significantly beyond me but the book contained these marvelous illustrations by Edmund Dulac. I had seen Ali Baba, Aladdin, and Sinbad in the movies so I knew who the characters were (sort of, the films in fact did not much resemble the stories).

I could lie for hours on the living room floor and just get lost in the illustrations. As a result I think that the illustrations are as important a part of a children’s book as the stories themselves. Perhaps it is the illustrations in conjunction with the language of the stories that train the child’s imagination; that gives the mind the practice it needs to be able to imagine the worlds created by the language of the writers that move us as adults. Perhaps without the words and pictures of a Dr. Suess we could not fully appreciate the words of a Shakespeare or a Tolstoy.