The Beginning of Things 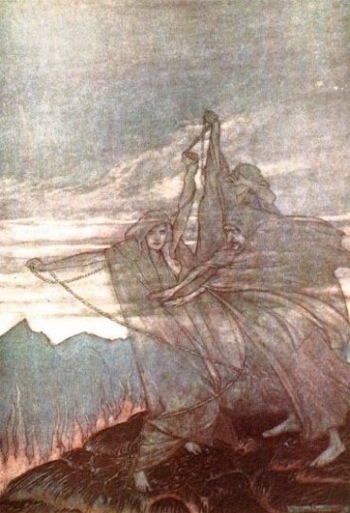 The song talks about having “high hopes” and that with those high hopes a great deal can be accomplished that does not, from appearances, seem to be possible. Much of life revolves around confronting the impossible and often what is labeled impossible has as much to do with lack of confidence as it does with lack of ability. Of course there are probably many things we do not have the skills or abilities to accomplish, but why begin by assuming that a beguiling challenge is beyond us; why do we not first try to prove to ourselves we cannot do a thing rather than assume we cannot?

The Norns in the painting above represent fate or destiny. These are familiar figures in the myth and folklore of many parts of the world. In the German myths the Norns were, as were the Fates in the myths of Greece and Rome, weavers who wove the tapestries of individual lives and when a life was done, they cut the thread and the tapestry that was that individual life was finished. But how was the tapestry created. Did the Norns weave into the tapestry what an individual accomplished or did the tapestry come first, preordaining what that individual would accomplish? It probably does not make much difference which came first, the tapestry or the acts that were woven into it, what is important is that the action is done, that the attempt is made. We will find out soon enough if it is our “destiny” or not and if it is not there are other “destinies” to pursue. 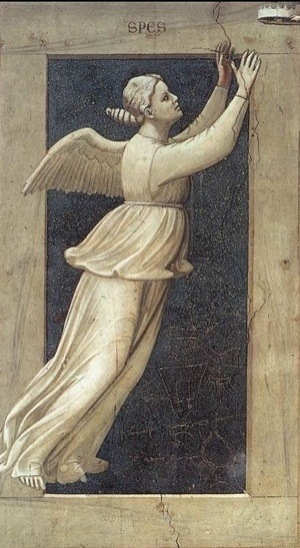 Succeeding at most things involves taking something we hope for or dream of and making it real, bringing it to pass. Often the difference between something hoped for and a goal is planning, figuring out how to get to where we want to go, or at least planning out the first few steps on the journey, perhaps its just figuring out where to start. Hope often has more to do with yearning than with planning, but perhaps often hope is where goal setting begins. It is after all one of the “Seven Virtues.” There was an article in The Boston Globe a few weeks ago, “The bright side of wrong” about the importance of making mistakes, of being willing to get it wrong. The article suggests that a great deal of success is the product of intuition, of insight into a problem or a project that is instantaneous and does not appear to be the product of careful thought. Sometimes decisions have to be made quickly and there is no time to “think things through.” We know many things and our minds can process the many things we know quickly and often what seems the product of intuition is the result of a kind of sorting process our minds can complete with speed and efficiency.

The article gives the following example to demonstrate this:

“To change how we think about wrongness, we must start by understanding how we get things right.

“Try filling in the following blank: “The giraffe had a very long ____.”

“You can answer that question in a flash, and so can my 4-year-old neighbor. Yet a computer — a machine that can calculate pi out to a thousand digits while you sneeze — would be completely stymied by it. Long after you’ve moved on from the giraffe and finished the sports section and gone for a walk, the computer would still be frantically spitting out ideas to fill in that blank. Maybe the giraffe had a very long…tongue? Flight from Kenya? History of drug abuse? Paralyzed by so many potentially right answers, the computer would struggle to generate any answer at all.”

This reasoning process, even when it is applied to much more complicated problems than the neck of a giraffe, is a reliable one more often than not for most of us. The more one has learned the more this is probably true. We have to be willing to live with the embarrassment that comes from getting it wrong from time to time if we are to enjoy the success that comes from getting it right at some crucial moment. It also means running the risk of getting it wrong in one of those crucial moments. 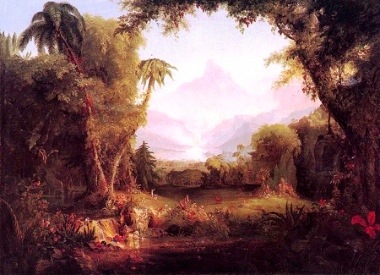 The paintings above and below depict The Garden of Eden, the one above of Adam and Eve enjoying the garden and the one below of them being sent out of the garden, after getting it wrong in what was for them a crucial moment. Cole’s vision of paradise may not be your vision of paradise but most of us know what it is to have attained and lost something beautiful, something secure and life sustaining. There is a sense that every major disappointment is a lose of paradise, something we have hung our hopes on has been denied, maybe it is losing an important game, getting a poor grade on a test we thought we were ready for. Maybe it is losing a job or failing to achieve a goal. Unlike Adam and Eve’s loss, though, most of our disappointments lose a bit of their significance with time and reflection. If we are wise we realize we must reassess if we are to be happy, it is important to feel the disappointment as a part of the healing process, but it is also important to grow beyond it.

Fyodor Dostoyevsky was celebrated as Russia’s greatest author upon the publication of his first novel. His second novel was published two weeks later and he was labeled among one of Russia’s worst writers, the praise had turned to scorn. He became insufferably cocky after his first book was published and well received. After his fall from grace fifteen days later he never recovered his confidence, though he did indeed go on to become one of Russia’s greatest novelists. His first book wasn’t as good as everyone said it was and his second book may not have been as bad, but the work of his maturity is recognized by most as truly great and part of what made it great probably lies somewhere in that earlier success and failure. 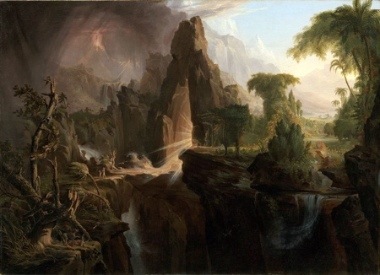 Expulsion from the Garden of Eden
Thomas Cole
http://en.wikipedia.org/wiki/File:Cole_Thomas_Expulsion_from_the_Garden_of_Eden_1828.jpg

When Adam and Eve lost paradise it was for them truly lost. For us, though, it is often a bit different. It is not unusual for people to set their sights too low, to settle for something less because it appears to be easily achievable. We, often, must lose an inadequate conception of paradise, through disappointment perhaps, to wake up to a truer more worthy view of paradise. Of course it could as easily happen that the fruit of our disappointment is to give up on paradise altogether. Still, I think there is a place for looking at failure as a kind of gift that puts us on a more rewarding path; a path more in keeping with our gifts and temperament.

The video is a TED Talk about the Hurdy-gurdy. As the clip suggests it is an odd instrument. My first exposure to the hurdy-gurdy was in the film Captains Courageous. Manuel, a Portugese fisherman played by Spencer Tracy in the film, plays the hurdy-gurdy to pass the long times of inactivity at sea. When I saw the instrument being played in the film I thought it could only play one tune; that it worked like a music box playing a pre-programmed song. From the video I learned that it is in fact an instrument that can play any tune, though its inner workings are odd and unlike any other instrument I know of. Learning is often like this, it surprises us, it draws us out of preconceptions and introduces us to new ways the world, or those things in it, work. Learning often opens the mind by teaching us something new about those things we believed we already knew, if not all there was to be known, at least all that was worth knowing. This is another way that hope is kept alive and “high hopes” are reawakened. The closer we get to learning all that is worth learning, the less interesting life becomes. It is often the surprises in life that keep it from becoming mundane and when we reach a place where we think we know all that is worth knowing we begin to believe there are no more surprises and this can be disheartening.

The painting below is of Ra setting forth on his nightly cruise of the underworld. This journey takes Ra through night and the land of the dead to the next morning and the world’s recreation. Each day the world is made anew and brings with it new possibilities. There is a sense that the failures of the previous day have been put behind us and we start the new day with not just renewed energy, but perhaps with new abilities or beliefs in existing abilities we did not possess the day before. 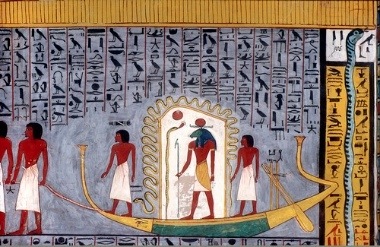 There was a review recently in The Guardian, “On Evil by Terry Eagleton,” of a book on evil by Terry Eagleton. The book is something of a paradox. Eagleton a Marxist, and one would assume, perhaps incorrectly, an atheist, has written a book on preserving the idea of evil as it is understood from, if not a Christian, at least a religions perspective. But the issue here is not evil, but a reminder that we can never quite know who all of our friends are and that sometimes discovering a friend can come as something of a surprise. Insights of this sort, too, recreate the world for us, because they make it a bit less hostile. Of course these insights can also go in the other direction and expose enemies we once believed were friends.

Still, the knowledge does us good and is probably worth having. It is a good thing to learn stuff, the good stuff and the bad. Learning can renew hope, and it can make us wiser if we use that learning to pursue wisdom. In the drawing below St. Anthony is reading a book. Reading is one of the conventional means by which learning is attained, though it is certainly not the only means. Still, if we are to read well when we open a book, it helps to open our minds first. 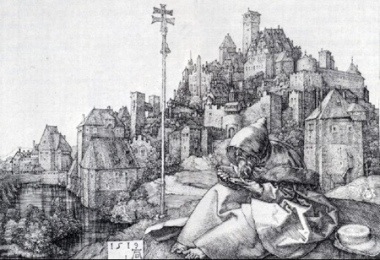