On Happiness with a Classical Twist 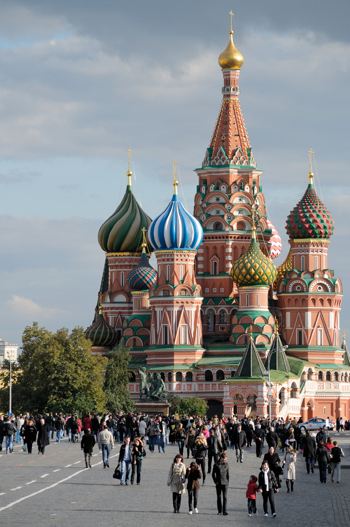 The Cathedral of Intercession of the Virgin on the Moat (St. Basil’s Cathedral)

Even someone without religious convictions can appreciate, I think, the irony of a choir representing an atheistic state singing sacred music. Of course the music is beautiful and one need not be religious to appreciate the beauty of the music. Stephen Jay Gould, the author and Harvard professor of Evolutionary Biology used to take part in an annual performance of Hayden’s oratorio The Creation. This too is a beautiful piece of music based on the book of Genesis, and, though not religious, Gould took great delight (or so he said to Christopher Lydon on at least one occasion) in performing it. There is, of course, great happiness to be gotten from listening to great music, reading great stories, looking at great art, and all the other cabinets of the classical tradition. The photograph is of St. Basil’s Cathedral in Red Square in Moscow. To me it seems out of keeping with the image I have of Russia. When I think of Russia I think of a very cold place and its literature often evokes a tragic people (though this is by no means the same as a humorless people). The colors of the cathedral are bright and they are vibrant and they make me smile. I believe it was created with that intention.

A friend of mine was reading Crime and Punishment by Fydor Dostoevsky a few years ago. She was in the middle and was finding it a very moving but a very sad book. I told her that much of the book was sad, but that it ended happily. I do not think many think the ending of Crime and Punishment a happy one; my friend did not. But I think it is happy. Albert Camus in his essay “The Myth of Sisyphus” tells us, after pointing out that Sisyphus’s life is a cycle of anguish, forlornness, and despair, that we must imagine Sisyphus happy.

If this is so, how much more happy must Raskolnikov be. He is a man who has committed a heinous crime. He is a man who appears through most of the novel to be devoid of conscience. He evokes for me in his intensity the line from Yeats “The best lack all conviction, while the worst / Are full of passionate intensity.” He finds, though, at the end of the novel, redemption and forgiveness. He finds peace with himself, his world, and his God. He accepts responsibility for his actions and he is sent to Siberia, one of the harshest, most forlorn locations on the planet. Yet he goes into this harsh physical environment at peace with himself and no longer fighting the much harsher and more relentless demons of his mind and spirit, of his inner self. In addition, he goes into this exile with the woman he loves. 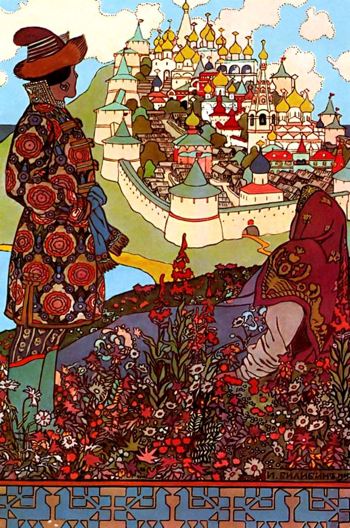 Granted, just as Cinderella, though we are told she lived happily ever after with her prince, must have had moments of conflict with her beloved in the process of that happily ever after. No doubt Raskolnikov and Sonya had their moments of tension as well, but there is no reason to believe they did not live happily every after. Also, for all its civilized refinements and comforts, St. Petersburg has its own impediments to happiness. The issue of happiness is an important one in the novel. Does it rest in our ambitions, our self-image or does it live somewhere else? Does happiness depend on external circumstance or does it come from within us? There are other issues raised in the book, of course, but I think for our time, the idea of where happiness is found and what it proceeds from is an important question. It is one of the questions humans hope to find answered in the books that they read. The painting above is of Buyan, a mythical place, a kind of paradise. It is a place of fairy tales. Neither Siberia nor St. Petersburg are such a place, but on the other hand, perhaps, Buyan and the other earthly paradises of myth, folklore, and story are more of an inner than an outer reality and to a certain extent stories help us to find that inner reality.

There was an essay in the Los Angeles Times recently by James M. Cain (author of hard boiled detective novels like The Postman Always Rings Twice). The essay is titled “Paradise” and it looks at how California in the 1930’s was portrayed in advertising as a paradise. Cain considers issues like truth in advertising, but more importantly he considers what makes any place, not just Southern California, a paradise. The essay finds much in Southern California that ought to make it a paradise, a “Buyan,” but like St. Petersburg in Dostoyevsky’s novel it takes more than creature comforts and cultivated society to make a paradise and, considering Raskolnikov’s Siberian destination, more than sunshine, warmth, and a day at the beach as well.

Great Expectations was recently voted, by readers of The Guardian, (“Great Expectations voted readers’ favourite Dickens novel”) Dickens’ best novel. This, too, is a book about a man looking for happiness in many of the wrong places who eventually comes to find a bit of it. But like many of us he has to learn it in a very difficult way. Though we may not ever have had Pip’s expectations or Raskolnikov’s demons we understand, and hopefully empathize, with their struggles. Raskolnikov is especially difficult to like. His crime is a brutal one, his self-justifications are very troubling, and his behavior throughout the novel is very hard to forgive. But at the end of the book, I find myself drawn to his character. In some ways Raskolnikov is a kind of Macbeth in reverse. We begin by seeing Macbeth as likeable, as having remarkable qualities and a potential for greatness. We end by seeing him as something of a monstrosity. Raskolnikov is villainous at the outset but by the story’s end he wins our empathy and we care about what happens to him and want him to be well. 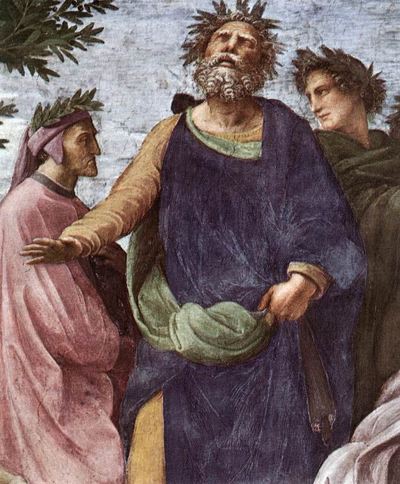 The Parnassus (detail of Dante, Homer, and Virgil)

There was an article in The New York Review of Books, “Do the Classics Have a Future?” by Mary Beard, a classics professor at Cambridge University. She makes the point that classics have been eulogized and declared dead on a fairly regular basis over the centuries. Jonathan Swift wrote a short story called “The Battle of the Books” that focused on the conflict between the classical tradition and the upstart modernists of his day. Many of the moderns that Swift found wanting have gone on to find their place in the “classical canon” of Western Literature but most of the classical canon of Swift’s day remains intact. The books may be difficult to understand at times, their characters and concerns may seem strange to us, at least they probably will if they are not properly introduced, but if understood these books continue to speak to us and their characters and concerns are found not be as odd as they first appeared. Beard also points out that the classics were written in what are now dead languages, or, as is the case with Chaucer or Dante, a language that no longer resembles the vernacular of our day no matter how vernacular the languages were in their own day. This is what language does, it grows, it develops, it changes.

Beard suggests that one of the better modern translations of The Iliad was done by Christopher Logue who knows no Greek, but has retold the story, using various translations as reference points, in a modern style and idiom. She and others have found Logue’s poetry to be very moving. It has been dramatized and performed successfully suggesting there is something in this story that still resonates. Stephen Mitchell has recently come out with another modern translation of The Iliad. Why such fuss over such an old book if no reads it anymore? The answer is, of course, that people do read it, and will probably go on reading it for quite some time.

One of my “History of the English Language” books when I was in college was called In Forme of Speche is Chaunge. It was a collection of readings from different periods n the growth and development of the English Language, from it’s earliest written forms to its most modern and the earliest bore little resemblance to the latest. Because language is constantly changing books written in other languages have to be constantly retranslated, because an 18th century translation, for example, of a book like The Iliad will present difficulties to the modern English reader. I remember while reading Spenser’s Faerie Queene that for the English reader there were advantages to reading someone like Dante who is always re-translated into the current form of the language, but with Spenser I had to struggle through a language that was a bit anachronistic when it was written and was even more anachronistic to a 20th century reader like myself. Still, I believed at the time and still believe Spenser was worth the time I invested in him.

The play, Trojan Women, on which this film was based, was written by the Greek playwright Euripides in the 5th century B. C. It is set even earlier in the Trojan War, the subject of Homer’s epic The Iliad mentioned above. This film version was made in the 1970’s and was seen as a commentary on the Vietnam War. Were it to be done again today there are conflicts aplenty about which it would have much to say. The scene in the clip focuses on a young child taken from his mother and killed. The child’s parentage makes him a threat to the Greek occupation. Easier to kill him now instead of later. The play at the very least reminds us that the horrors of war have always been seen as horrors. When Euripides wrote the play it was seen as a commentary on the Peloponnesian Wars and the behavior of the Athenians in that war. Like Swift’s Gulliver in the conflict between the Lilliputians and the Blefuscans, Euripides did not want to play a part in the subjugation of a free people.

Happiness often has a social component. It could be argued that Euripides wrote his play because the behavior of the society of his day impinged upon his happiness. It is difficult for a conscientious people to be happy when the behavior of the society in which they live disturbs their conscience. It is generally true that the majority of the people in a society, especially a free society, are relatively content. But at what cost is that contentment purchased? And if that cost is largely born by others, how easy is it to ignore the cost? Reading stories, even the classics, will not make one wise or virtuous in and of itself. But these books often raise the issues that a people of conscience ought to consider.

Swift once said of satire that it “is a kind of glass, wherein beholders do generally discover everybody’s face but their own.” The problem with reading, even when that reading is in the wisest and most revealing of books, is that we often take only from them what we wish to take and leave the rest alone. Often it is the bit that is left alone that is essential for us to comprehend. Raskolnikov ended happily because he allowed himself to be changed. We all are shaped by history and we all have a history. One of the lessons that stories teach us is that all change begins with individuals and that to change a society we often need to begin by changing ourselves. It is often in these changes that happiness is found. 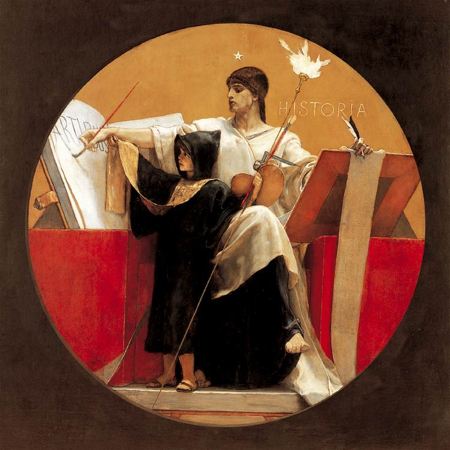