Working Our Fingers to the Virtual Bone

The illustrations and the film clip suggest various attitudes toward technology that, though by no means typical, often are given a bit of credence at least at the visceral level. In the film clip a mad scientist has created some flying robots that are performing robberies of one kind or another in the city of Metropolis. Lois Lane follows them to their den and of course Superman follows Lois Lane. The view towards science and technology is one of distrust; that those with technological no-how are somehow using that knowledge to do harmful things to the rest of us; they are at some level corrupting our culture. There is, I think, a bit of irony here in that the tools that allowed the Fleischer studios to create this animated film were themselves new technology. Do we trust the message or the vehicle containing the message?

In the 1920’s Technocracy, a belief that a society run by scientists and other experts from various fields would be a happier more prosperous society, enjoyed some popularity. Technocracy, Inc. maintains a web site that anyone can visit to this day. By the 1940’s, though, this movement had lost much of its public appeal. The Superman film clip is from 1941 and perhaps reflects a changed attitude towards technology. Though, I remember in 1968 driving down L. A.’s Harbor Freeway and passing a billboard advertising Technocracy as the cure for all that ails us. The sign had seen better days and I imagine that by now it has probably disappeared. 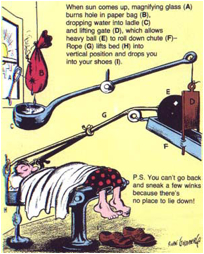 The illustrations suggest another attitude towards technology, that though it can come up with some ingenious solutions to troublesome problems the solutions are often more troublesome than the problems. The Rube Goldberg machine probably got its definitive treatment (at least in my view) in Charlie Chaplin’s film Modern Times where the Little Tramp is hooked up to a machine that will feed him his lunch while he continues to work the assembly line, thus increasing productivity. The machine, of course, breaks down, and the overworked little tramp has a different sort of breakdown.

These views of technology are comic but I think they reflect attitudes (taken to hyperbolic extremes) of some educators toward technology in the classroom. If they do not find it an “evil” intrusion upon their classroom time they see it as a bit silly promising much more than it can deliver and, like a Rube Goldberg machine, being too complicated to be effective in the classroom. And hyperbole aside, the resistance to technology on the part of some is real and it is intense.

Those that have made use of the technology think those that have not are needlessly working their “fingers to the bone”, while those that do not embrace the technology maintain a similar attitude toward the “technocrats” in their midst. The issue, though, has little to do with silliness or malevolence. The issue, at its heart, revolves around the skills students will need when they enter the adult world and which of those skills ought to be taught in the public schools. When I started teaching in Massachusetts in the early 1990’s technology in the classroom was very popular and there was a lot of state support for it. But within about five years or so people began to realize that the technology quickly becomes obsolete and is very expensive to maintain and replace. About the same time, budget problems caused state funding to disappear.

But to address the key question, does Web 2.0 (and whatever technologies that follow) have a place in the schools; are they important for our students to know and understand? Paul Anderson writing on the impact of Web 2.0 in British schools wrote, “The report establishes that Web 2.0 is more than a set of ‘cool’ and new technologies and services, important though some of these are. It has, at its heart, a set of at least six powerful ideas that are changing the way some people interact. Secondly, it is also important to acknowledge that these ideas are not necessarily the preserve of ‘Web 2.0’, but are, in fact, direct or indirect reflections of the power of the network: the strange effects and topologies at the micro and macro level that a billion Internet users produce.” The six technologies that he goes on to identify are blogs, wikis, social bookmarking, Multimedia sharing, podcasting, and RSS. He sees value in making effective use of these tools.

He is writing about the impact of Web 2.0 on the way universities do what they do but the arguments he makes are also relevant to secondary education and perhaps elementary education as well. And if the universities are going to expect students to use these tools then they should be sent to university knowing these tools. He goes on to say, “In short, these are ideas about building something more than a global information space; something with much more of a social angle to it. Collaboration, contribution and community are the order of the day and there is a sense in which some think that a new ‘social fabric’ is being constructed before our eyes. These ideas though, need technology in order to be realized into the functioning Web-based services and applications that we are using.” The strength of Web 2.0 is that it helps build communities and assists collaboration. But he is concerned that there is not enough research (as of February 2007) to adequately evaluate its usefulness. He wonders what will happen to libraries and more traditional sources of information and research. Anderson’s report was peer reviewed to authenticate the validity of the conclusions he reached. I am concerned that effective peer review is difficult on the web.

I began by asking myself how do I know that the articles I am reading are reliable? I found them all on a web search using Google Scholar, but does that mean the articles that the search engine finds are reliable? How do you verify sources; why should I trust these articles or what they assert? The implication for students is that I am teaching them to use materials because they can be easily found and not because they are reliable.

My personal conclusion is that the 21st century student needs to be taught the rigorous content of the traditional curriculum for each of the academic disciplines but that they need to be taught this content in a way that takes into account the technologies and tools they will be using when they enter the work place or the university. Part of that, especially for those students that go on to the university, requires they know how to research effectively using the Web 2.0 tools and can recognize the difference between real and dependable research and that which has little more than unsupported personal opinion to recommend it.

I do not think we should be telling students what to dream, what to be, or what to do. But we should be helping our students get the skills they need to pursue those dreams and aspirations. As a teacher I need to help students master the content of the discipline I teach and the tools (conventional and technological) of that discipline. If I teach students to use wikis, blogs, and the rest of the Web 2.0 suite of tools it is not because it is important to know those tools (it is but the tools as tools ought to be taught in technology classes, the 21st century equivalent of the typing course I took when I was in high school) it is because these tools will help them to more effectively master the discipline. By teaching these tools within a context, an academic discipline, students not only learn to use the tool but they also understand the relevance of the tool, its value for accomplishing a task.

John Thompson argues that colleges and universities are incorporating these technologies more and more into what they do. I personally find it troubling that the reason he gives for introducing these technologies into the classroom is because they are so popular and widely used by our students. While this is true it is not an argument based on academic merits for the classroom. Many things are popular, not everything that is popular can be exploited in the classroom.

Should schools change what they do to accommodate the interests of their students and the direction the technology is taking the culture? Time Magazine in an article on this changing technology imagines a 20th century Rip Van Winkle awaking in a 21st century world. After watching people playing video games, walking around with pace-makers and hip replacements he walks into a school. “But when he finally walks into a schoolroom, the old man knows exactly where he is. ‘This is a school,’ he declares. ‘We used to have these back in 1906. Only now the blackboards are green.'” I think there is a bit of hyperbole here. My blackboard is white and I use erasable magic markers in various colors. There is also a television in the classroom used for showing videos and the like. Still, that said, there is a bit of truth to the joke.

The article goes on to say, “This is a story about the big public conversation the nation is not having about education, the one that will ultimately determine not merely whether some fraction of our children get ‘left behind’ but also whether an entire generation of kids will fail to make the grade in the global economy because they can’t think their way through abstract problems, work in teams, distinguish good information from bad or speak a language other than English.” I think this captures the essence of the problem for the public schools and technology. It also captures what our use of the technology in the classroom must accomplish if it is to be used effectively. Using a wiki or a blog because it is fun does not really address the problem. These tools must be used to lead students more deeply into the subject matter. If it does not do that the new technology will fail them just as surely as the antiquated academic practices schools now employ.

Schools need to assess their roles in the realm of technology. Oftentimes schools are given by those behind the curtain (usually politicians) impossible tasks to complete. Often these tasks are like the one given to Dorothy of getting the Wicked Witch of the West’s broomstick (Edith Hamilton after playing the role of the witch I am told used to wear a pin with “WWW” on it, perhaps the first suggestion of the diabolical origins of the internet). These tasks are more a way of diverting attention away from addressing the real issues at hand. Instead of recovering a broomstick educators are required to waste significant amounts of time (usually doing things to make schools look more like those the voters attended) so that those behind the curtain can appear to be addressing the problems with education. Schools need to be encouraged to prepare students for the world that is and not the world that was. The problem is the technology is expensive and schools need more than just the right mandate and a list of academic outcomes that must be reached; they must be given the funding to carry out the mandate and to achieve the outcomes.

From Boney Fingers, Written and Performed by Hoyt Axton, From Bread and Roses