So What
Miles Davis 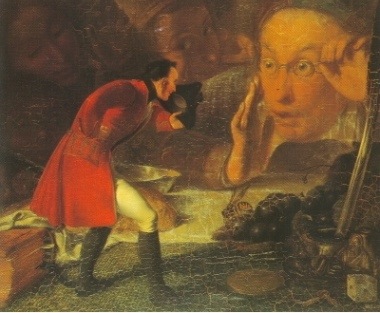 I enjoy this piece of music in part because of its attitude. The name of the song is “So What” and you can hear the piano come in saying “So What” followed by the trumpet joining in that sentiment and echoing the piano’s “So What.” Sometimes we take ourselves to seriously and respond to those around us with, if not a verbal an attitudinal “So What.” As a teacher there is rarely a day that goes by when at least one student does not express this sentiment. The picture above is of Gulliver, from Swift’s novel Gulliver’s Travels meeting a Brobdingnagian. Gulliver is of average height, about six feet, but he is traveling through a land where the people are 72 feet tall. Gulliver appears to be at his ease, making a friendly gesture to the surprised giant. As this part of the story progresses Gulliver will become more belligerent and respond to some of the inhabitants with the same insolent indifference expressed by the piano and trumpet in the song.

How important is attitude in our daily lives? Does attitude reveal the feelings that we harbor or is it a mask that conceals emotions we do not want those around us to know we are feeling, that is, does attitude reveal or conceal? If I were Gulliver in the picture above my attitude of “pleased to meet you” would be concealing my terror, while the attitude of the Brobdingnagian is probably genuine, revealing his actual feelings. It is probably safe to say that attitude reveals or conceals based on the situations in which we find ourselves. 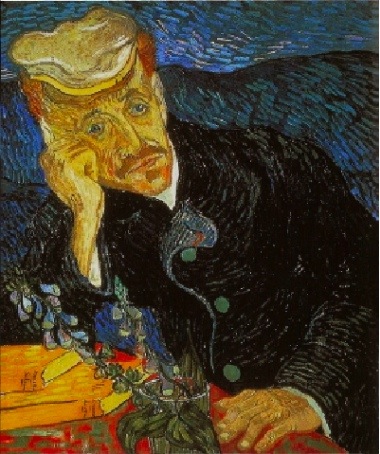 Dr. Gachet was, in addition to being a doctor, an amateur painter who treated Van Gogh’s final illness. Van Gogh was not formally a patient of Dr. Gachet, they were friends and it just happened that one of the friends was sick and one of the friends was a doctor. Van Gogh said of the painting that he was trying to capture the Doctor’s melancholy. I am not sure if this melancholy lived more in the doctor or in the painter but the attitude of sadness can be seen in the painting. The flower the doctor holds is a foxglove, a plant that had medicinal value and may suggest the doctor’s melancholy is directed toward his profession. I think it is often the attitude of the subject captured by the artist that makes a painting interesting. Most photographic and, in Van Gogh’s day, many painted portraits do not reveal much in the way of attitude, or if they do, the attitude is posed to capture that which the subject wishes to project to the world and not necessarily the subjects true attitude toward the world. 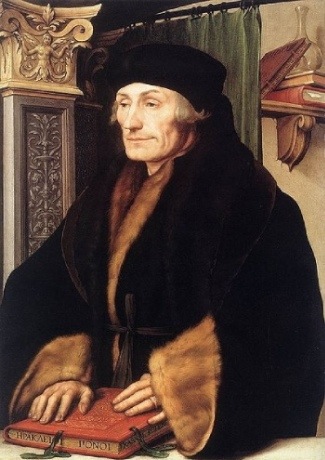 This is a more formal painting of the Dutch Humanist Erasmus. But, like the Van Gogh portrait of Dr. Gachet, this portrait of Erasmus conveys an attitude and not a pose. The facial expression suggests an attitude of resignation, perhaps towards what he finds in the world. His most famous book is a satire called In Praise of Folly. The title is a Greek pun. The actual title of the book is Moriae Encomium. “Encomium” just refers to a literary work whose purpose is to praise and “moriae” in Greek means fool. However, “More” was also Erasmus’s best friend’s last name, his friend was Sir Thomas More. “Moriae” could also be Thomas More’s last name rendered into Greek. So the title could mean “In Praise of More” or “In Praise of Foolishness or Folly.” The contents of the book, though, suggest the latter. The book mocks the foolishness Erasmus found in the world and the look of resignation may reflect the need to tolerate what one cannot change.

There are also the books that he has surrounded himself with. They were an important part of his life. He once said that when he had money he bought books and if there was any left over he bought food and clothes. This reveals an attitude towards books and learning that some think is being lost today. I am not so sure. But I read over the last few weeks of the closing of some famous bookstores. A blog I visit, The Elegant Variation, lamented the closing of the LIbrairie de France. The blog’s author, Mark Sarvas, grew up with this bookstore and it was an important landmark in his growing up. My brother told me recently of the 100th anniversary of the bookstore I grew up with in San Pedro, Williams Books, and even though I no longer live in San Pedro I know the sadness I would feel if that bookstore were to close.

I also read a few weeks ago of the closing of a bookstore in London’s Charing Cross Road bookstore district. The article included a map of Charing Cross Road that showed the locations of the bookstores than and now. The bookstore that closed was devoted to mystery novels and was called “Murder One.” I enjoy mysteries and am saddened I will not be able to visit this shop. I remember visiting this section of London in the 1970’s and I visited many of the bookstores on the map, many of which are no longer in operation. I am especially fond of second hand bookstores because I enjoy handling books that have been read before in which previous readers have made notes in the margins about what moved them or made them think.

There is an attitude towards books and learning that we carry with us throughout our lives. Some think books and learning are being valued less, but perhaps it is just the kind of books and the kind of learning that is valued today is a bit different from what was valued when I was growing up. It may also be that those that make this assertion have an agenda that is served by people thinking attitudes are changing. I do not think books and scholarship have ever really held a place of true esteem in our culture and preserving them has always been a bit of a battle.

But to get back to attitudes and the paintings, Mark Twain once said “Good breeding consists in concealing how much we think of ourselves and how little we think of other persons.” I think a good painting, on the other hand, is one that captures what the subject thinks of himself and those around him. The paintings of both Dr. Gachet and Erasmus suggest that though they view the world in a certain light that is not entirely positive they maintain a sense of equanimity towards the world. Erasmus seems amused by what he sees while there is a gentleness and sensitivity to the doctor’s expression that softens his melancholy a bit.

This film clip reveals a number of different attitudes some of them positive and some of them negative. Lionel Barrymore as the ship’s captain Disko Troop reveals an attitude towards the captain of an approaching ship that seems on the surface somewhat hostile. And that other captain’s attitude seems to reflect a similar hostility. But those that know both men realize that these attitudes are something of an act that proceeds from the competitive spirit of each and from the friendship that each feels for the other. On shore they are good friends while at sea they are competitors. There is a genuine desire on the part of both these men to outdo the other, but there is also a genuine affection that they share for each other. Both these attitudes live side by side in these men and both are true.

Freddy Bartholomew plays a boy named Harvey Cheyne. He on the other hand is insufferable. He is rich kid who thinks the world of himself and much, much less of everyone else. In part this is because of the treatment he has received from his father. His father genuinely cares for the boy, but he is a man of business and his business keeps him away from home and largely uninvolved in the son’s life. The boy has become a bully and has been able to get away with being a bully in part because his father is not involved enough in the boy’s life to curb this behavior.

The character played by Spencer Tracy, Manuel Fidello, is a fisherman on the boat who takes the boy in and tries to be something of a father figure. Manuel is a man who was loved by his father and who is in turn kind to most of the people he encounters. He is proud of what he does and of who he is and has little patience for those like the boy, that think too highly of themselves and too little of others. His pride comes from what he is able to accomplish. His kindness from the kindness he received growing up. His attitude towards the boy’s behavior is not positive, he does not like the boy’s arrogance and selfishness. But he likes the boy. He chooses to listen to the feelings he has for the boy and in listening to those feelings he eventually succeeds in changing the boy’s attitude.

So what is the proper role of attitude and what does it reveal about us and what we think of those around us? Most have approached the world with a variety of different attitudes at different times in their lives. We have probably been as insufferable as the boy and as compassionate as the fisherman. We have probably have friends that those around us that do not know us well think are our enemies. Most have seen friends go on to become enemies.

I think that the attitudes that get us in the most trouble in life are the same attitudes that make us successful. That a good part of learning to live well is learning to discipline our attitudes so that we are perhaps as Mr. Twain advises; that we conceal how much we think of ourselves and our abilities and how little we think of others. Perhaps the wisdom in cultivating this attitude is that over time we can look more realistically at ourselves and those around us without losing our confidence in our own talents or our ability to compete with those whose skills we truly respect.