Whan That Aprill with His Verses Soote 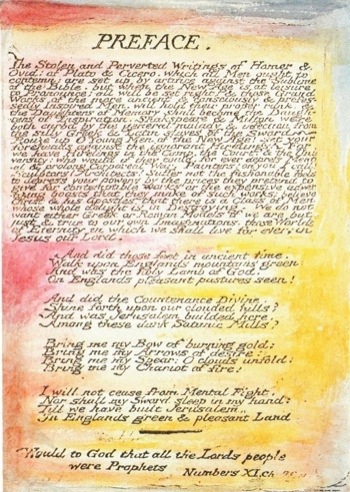 April is National Poetry Month. For students across America made to study poetry (or at least certain poems) against their will this might also make April the cruelest month. Of course for poetry to be properly appreciated it needs to be not so much studied as contemplated, reflected upon in the context of our lives and how they are lived. In studying poetry the focus often shifts from the passions that were aroused in the poet and which the poet is in turn trying to arouse in the reader to more academic concerns that, though they are important and should be considered, are beside the point. There was a recent article by Sven Birkerts in Lapham’s Quarterly on “idleness, “The Mother of Possibility”, in which he says,

“On a similar track, I wonder about childhood itself. I worry that in our zeal to plan out and fill up our children’s lives with lessons, play dates, CV-building activities we are stripping them of the chance to experience untrammeled idleness. The mind alert but not shunted along a set track, the impulses not pegged to any productivity. The motionless bobber, the hand trailing in the water, the shifting shapes of the clouds overhead. Idleness is the mother of possibility, which is as much as necessity the mother of inventiveness. Now that our technologies so adeptly bridge the old divide between industriousness and relaxation, work and play, either through oscillation or else a kind of merging, everything being merely digits put to different uses, we ought to ask if we aren’t selling off the site of our greatest possible happiness. ‘In wildness is the preservation of the world,’ wrote Thoreau. In idleness, the corollary maxim might run, is the salvaging of the inner life.”

There is a sense in which poetry was created to feed idleness. It will not be understood quickly and does not make many concessions to multi-tasking. It wants our undivided attention; it wants to force upon us a “Sabbath rest” that invigorates and nourishes our consciousness. What well written poetry does more often than it does anything else is change the way we see things; it enables us to see more clearly and deeply its object.

The song that began this is a poem by William Blake set to music. The illustration at the top of the page is Blake’s engraving designed as a visual accompaniment to the poem’s language. The song and the engraving underscore both the musicality of the poem’s language and vividness of its imagery and what is true of this poem is true of many, perhaps most poems; to be fully appreciated they should be heard and allowed to paint their pictures in the hearers imagination. Poems are more than words on a page. And where it is true that all written language is more than words on a page, poetry often becomes more incomprehensible the more it is reduced to the words that form the sum of its parts. Where a novel or an essay is using language to tell a story or communicate an idea, poetry is often using language to evoke, suggest, or point to something beyond itself and in this sense paying too much attention to the words themselves obscures what the words are trying to do. 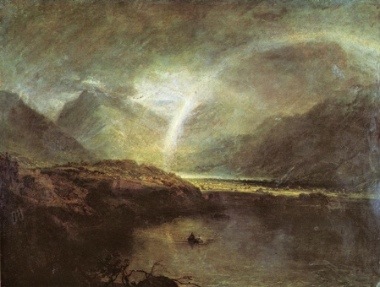 In many ways poetry and painting are alike. The painting above is an impressionist landscape by J. M. W. Turner. It creates an image of water, mountains, rocks, vegetation, and sky. There is a boat in the water and one or two people in the boat. It provokes in the viewer an emotional response to the natural world and to its beauty and wildness. The images in the painting are not unlike those found in the opening lines of William Wordsworth’s poem “Tintern Abbey”

Five years have past; five summers, with the length
Of five long winters! and again I hear
These waters, rolling from their mountain-springs
With a sweet inland murmur. — Once again
Do I behold these steep and lofty cliffs,
Which on a wild secluded scene impress
Thoughts of more deep seclusion; and connect
The landscape with the quiet of the sky.
The day is come when I again repose
Here, under this dark sycamore, and view
These plots of cottage-ground, these orchard-tufts,
Which, at this season, with their unripe fruits,
Among the woods and copses lose themselves,
Nor, with their green and simple hue, disturb
The wild green landscape. Once again I see
These hedge-rows, hardly hedge-rows, little lines
Of sportive wood run wild; these pastoral farms,
Green to the very door; and wreathes of smoke
Sent up, in silence, from among the trees,
With some uncertain notice, as might seem,
Of vagrant dwellers in the houseless woods,
Or of some hermit’s cave, where by his fire
The hermit sits alone. 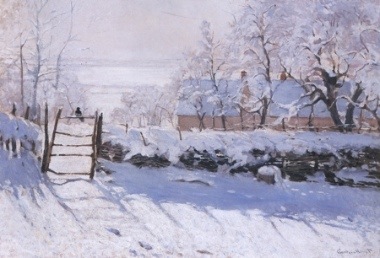 Not all poetry, though, is as easy to follow. The painting evokes the winter landscape and the emotions winter often brings. The poem “the Snow Man” by Wallace Stevens evokes similar emotions, though the language is less transparent and not so easily understood.

One must have a mind of winter
To regard the frost and the boughs
Of the pine-trees crusted with snow;
And have been cold a long time
To behold the junipers shagged with ice,
The spruces rough in the distant glitter
Of the January sun; and not to think
Of any misery in the sound of the wind,
In the sound of a few leaves,
Which is the sound of the land
Full of the same wind
That is blowing in the same bare place
For the listener, who listens in the snow,
And, nothing himself, beholds
Nothing that is not there and the nothing that is.

There is found in both the painting and the poem frost and the boughs of trees and snow to surround the listener. But there are meanings to the poem beyond what the eye can see and the ear can hear. The language of the poem conceals meanings beneath the snow it captures that the painting does not. Or perhaps it does, perhaps it takes a mind of winter and an ear attuned to the sounds of winter to appreciate the painting as fully as Monet would wish.

Oscar Wilde said, “It is only shallow people who do not judge by appearances. The true mystery of the world is the visible, not the invisible.” I am not sure what Wilde meant by this, but it suggests to me that first impressions, those impressions that attract us to something are taken in through the senses. There is something I can see in the poem and the painting that attracts my attention even though I do not fully understand what I see. There is a mystery to be unraveled but the mystery is suggested by what appears on the surface of the canvas and the surface of the language. The first impression is “superficial” but it need not be “shallow.” The depth of that impression is determined by how deeply I pursue the mysteries the surfaces of the canvas and the language evoke.

The video clip suggests another aspect of this mystery of first impressions, of the play of light upon surfaces to create beauty. Using terms like “light” and “darkness” often suggests to us metaphorically “good” and “evil.” But that is not necessarily what is being suggested so much as the need for contrast in order for any surface to be fully appreciated. Robert Browning suggests this in the closing lines of his poem “Home Thoughts from Abroad,” when he says, “And though the fields look rough with hoary dew, / All will be gay when noontide wakes anew / The buttercups, the little children’s dower / – Far brighter than this gaudy melon-flower!” He is contrasting England’s less sunny landscape with the overly bright “gaudy” landscape of Italy. As is seen in the video when Van Der Heide compares brightly, uniformly lit spaces with those that are less uniformly lit. And even in his examples of cityscapes and of the planet viewed at night from space there is beauty, even though the light is not being used efficiently, in these images that contrast light and dark.

It might be argued that the beauty in a typical Ansel Adams photograph, or any black and white photograph, is created entirely by the contrasting of light colors with dark colors. But more importantly for me and what I am trying to say is what this suggests about poetry. The poems that often resonate the most, touch the reader the most are those that contrast effectively the expected with the unexpected; “the nothing that is not there” with “the nothing that is.” The line is a surprise and it delights us and it delights itself in keeping its secrets close. 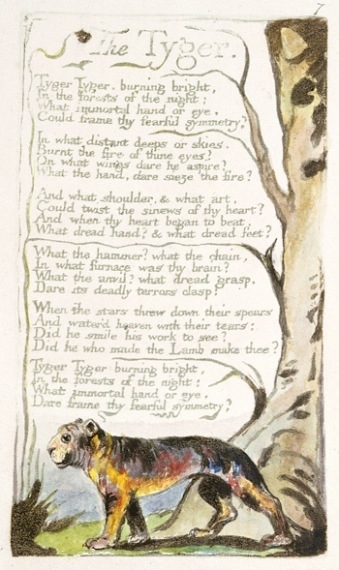 This element of surprise is also seen in the poem “The Tyger” by William Blake. The surprise begins with the engraving Blake made to illustrate the poem, especially the engraving of the “tyger.” The tyger in the poem is a terrifying creature and though we may not be entirely sure what Blake means in this poem we are entirely sure we would not like to meet this tyger. The poem evokes something more akin to the tiger in the painting below than the “stuffed animal” suggested by Blake’s illustration. And that is part of the surprise. We see from the contrast of the tyger with the lamb a suggestion that this wilder beast is a being equated with the devil as it is contrasted with that tamer beast “the lamb of God.” Perhaps what Blake means to suggest is that evil resides only in our minds and that the world exists in contrasts of light and dark and that neither is “bad” and that both are necessary; that, as Pope suggests in his “Essay on Man” “whatever is, is right.” Or perhaps Blake is suggesting something far more subtle, that evil often appears to us in the guise of innocence and that because we expect the face of evil to terrify us, we do not recognize it when it makes us smile.

Tyger Tyger, burning bright,
In the forests of the night;
What immortal hand or eye,
Could frame thy fearful symmetry?

In what distant deeps or skies,
Burnt the fire of thine eyes?
On what wings dare he aspire?
What the hand, dare sieze the fire?

And what shoulder, & what art,
Could twist the sinews of thy heart?
And when thy heart began to beat,
What dread hand? & what dread feet?

What the hammer? what the chain,
In what furnace was thy brain?
What the anvil? what dread grasp,
Dare its deadly terrors clasp?

When the stars threw down their spears
And water’d heaven with their tears:
Did he smile his work to see?
Did he who made the Lamb make thee?

Tyger Tyger burning bright,
In the forests of the night:
What immortal hand or eye,
Dare frame thy fearful symmetry? 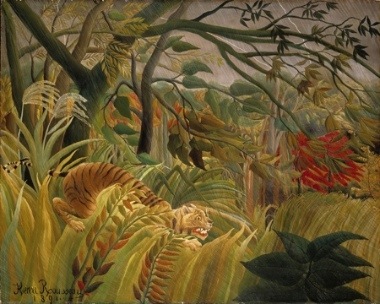 How necessary is poetry to life? Can we get along without it? Plato seemed to think so and would have banished poets, he suggests that they lie, distort, and create discontent within a society. His pupil Aristotle felt otherwise. Many avoid poets, not for the reasons Plato suggests but because poetry has gotten a reputation for being difficult to understand requiring too much work to offer any real pleasure. But to those that read poetry and enjoy it the pleasure lies in working things out grappling with the meanings the poems often conceal. But this is often true with life in general. What is easy is often boring; what comes without effort rarely satisfies. There is something in the poem that enchants us and it is this sublime enchantment that the reader and the writer of poetry seek. I think it is this enchantment that we all seek.