In My Room
The Beach Boys

If Young Hearts Were Not So Clever 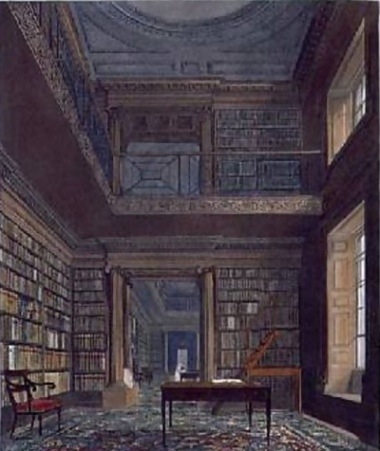 The paintings above and below capture the images that many of us have of learning; the private space where the study is done and the overcrowded public space where that study is tested. The world of the library has an enchantment for some and is a desirable space, but the overcrowded hall gives pleasure to very few. For too many, perhaps, learning is characterized by this second space and it is a space that most want to escape. Even those that earn their living managing and directing this academic space do not feel entirely at home in it when it is given over to activities like the one depicted in The Writing School. It may be a necessary evil, but few are comfortable in the presence of evil, even those that are for one reason or another, necessary.

The title comes from a poem by A. E. Housman that suggests that too much thought can only bring us grief. But I think the poem ironic and maybe the real message is something different; that perhaps some do not think enough, and that those that do think do not think enough of others. There was an article in the Boston Globe recently, “The power of lonely”. It is about the importance of spending time alone with our thoughts and ourselves. The title is misleading, the essay is not about loneliness so much as solitude, which is not really the same thing, we may be lonely when in solitude, but we need not be and that really is the point of the essay. As in the song, a room is a place we can go to search ourselves and to escape what troubles us, including loneliness. The point of the article, and perhaps the song as well, is that without time spent alone in reflection we often do not fully comprehend what we have learned and experienced, in fact we often do not retain what we have learned and experienced without privacy and reflection. 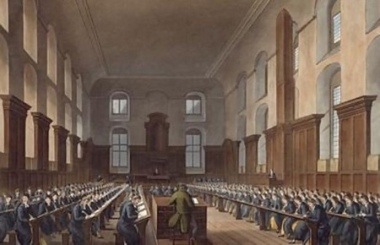 One of the paradoxes of stories is that they are, usually, read in solitude, but they involve the reader in the world of others, sometimes the world at its most private and intimate and sometimes at its most rowdy and public. As readers we are drawn into a world filled with people and noise and activity. If we are good readers that world becomes as real in our imaginations and the people as much a part of our lives as the physical world that we inhabit and all the people in it. So when the ghost of Christmas Past shows to Scrooge his young self alone in the schoolhouse, because his friends have all gone home for the holidays, Scrooge sees not only himself, but the characters in the stories he read as a child. He says to the spirit, “’Why, it’s Ali Baba!’ Scrooge exclaimed in ecstasy. ‘It’s dear old honest Ali Baba!’” And in the story Dickens tells Ali Baba is as much a part of the scene as the boy Scrooge and the dark old schoolhouse. 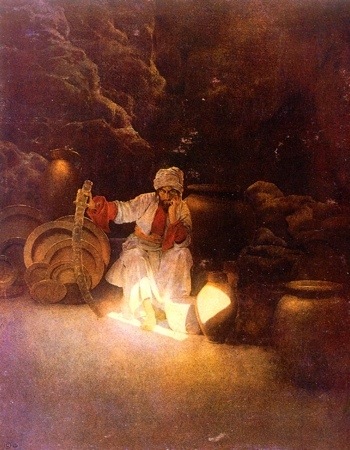 So Scrooge alone need never be alone and we alone need never be alone, even if the “friends” that surround us are visible only to us, and live only in our thoughts (for no two readers bring a story’s characters to life in quite the same way, they are like fraternal twins with the same names). Stories move us in the reading of them; they come to life as we experience the words with which they are told coming to life in our imaginations. But just as it often takes time for us to absorb all we have seen on a visit to a place we have never seen before, it often takes time to fully experience the stories that we read. There is the mystery of the first impression, who fully understands what it is in a story that captures us, and there is the unraveling of parts of the mystery as we contemplate what we have read.

William Wordsworth wrote in the Introduction to The Lyrical Ballads, “I have said that poetry is the spontaneous overflow of powerful feelings: it takes its origin from emotion recollected in tranquility: the emotion is contemplated till, by a species of reaction, the tranquility gradually disappears, and an emotion, kindred to that which was before the subject of contemplation, is gradually produced, and does itself actually exist in the mind.” Wordsworth was expressing his belief about how poetry is written, but there is something to be said perhaps about the imagination following a similar path in the act of reading as well.

The experience of reading is very subjective, we are all moved by different kinds of stories and though many readers like the same stories, I wonder if any two readers share an identical list of “important stories”, life changing stories. What we do with the stories we read after we have read them is often objective, the focus of study and analysis where we try to understand why we were moved as we were. This study in turn often reproduces some of the emotions the original reading produced. The initial emotion is subjective, the contemplation in tranquility is objective and this objective contemplation in turn produces a subjective experience. It is in working our way back from study to the recreation of the emotion that we often learn the important lessons that reading has to teach. If we stop after the first reading and never proceed to contemplation we may be left with a plot and the memory of a pleasant experience, but I wonder if this is enough to teach us much or to produce any kind of epiphany.

The paintings above and below depict people in solitude and contemplation. In both pictures it appears that there is something melancholy about the depiction of solitude. In the painting of the Eton Library displayed earlier the most prominent colors are shades of blue a color often associated with melancholy. This is often the view of solitude and contemplation that comes most immediately to mind when these words are mentioned. I think it is in part this view of being alone that urges some of us to avoid spending time with ourselves and to make the mistake made by the author of the article who in the article’s title equated loneliness with solitude. Where it is true that too much time alone can produce a melancholy state of mind, too much time in the presence of others often produces a false contentment, a contentment not based on satisfaction with who we are or what we have done, but on keeping discontent at bay. 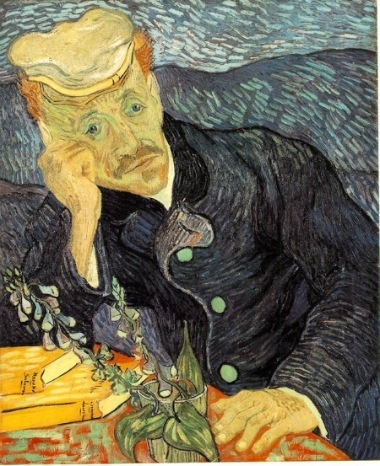 There has to be a middle ground between thinking too much and thinking too little. There was an article in The Chronicle of Higher Education, “The Case for Play”, that offsets, perhaps, the article on solitude and balances it out a bit. Just as it is important to spend time alone in thought and contemplation, it is also important to play and perhaps to find ways to incorporate play into our learning. Children who do not learn how to make friends and to make time for leisure and fun, are not likely to grow up to be healthy adults. And this is not just fun in the sense of having a good time, though it is that, but the nurturing of the ability to create enjoyment from the materials we are given. Creation is at the heart of recreation, if we are to be truly carefree we need to learn how to find delight in what we have, to invent our games and pastimes from the commonplace. Even if we have the resources to buy whatever we want, there is often greater satisfaction gotten from making our fun from the simplest most attainable things. It is not the materials but the relationships that are important and it is often the inventing together of our pastimes that build these relationships.

There was also a recent article in Lapham’s Quarterly, “Vanishing Act”, about a young girl, Barbara Follett, who began her career as a novelist at the age of eight. Her father was a prominent writer, Wilson Follett. He wrote an influential book found in the libraries of many English teachers, American Usage, on grammar and such. He gave his daughter Barbara a typewriter and a room of her own. She spent serious time alone writing and with the guidance of her father produced a novel that was eventually published. The book received wonderful reviews, except for one that did not fault the writing but the wisdom of a parent encouraging a child to write this seriously at such a young age. Wilson Follett soon after divorced his wife, started a new family, and left Barbara to fend for herself. She did not do well and at 25 she disappeared and was never heard from again by anyone. The mystery is still unsolved. She depended overly much on a father who disappeared for guidance and did not learn enough of how to build relationships with others.

Of course there is another connotation to “play” that is suggested by this video clip, the making of music, the playing of an instrument. I think it is interesting that we refer to something as “play” that requires so much work and such intense concentration to do well. The playing of music also requires us to play well with others, at least most music does, even soloists need accompaniment, even the folksinger accompanying her or him self on an instrument depends on a crew of technicians to be heard. What is meaningful in this for me is the suggestion that those things we work hard at can also bring us intense pleasure and that work and play need not be two different things.

Sports, too, require this kind of teamwork if we are to play well. It is interesting I think that this kind of teamwork can often bring together people who would normally not be the best of friends. The picture below is of soldiers playing baseball during the Civil War. Soldiers on both sides loved this game and played this game. It is perhaps a healthier form of competition because everyone gets to play again tomorrow. The Housman poem ends, “’tis only thinking / Lays lads underground.” Perhaps there is truth to this, but I think if this is true it is because the wrong people are doing the thinking and that those doing the thinking have probably thought more of ends than of consequences.