What We Put Away 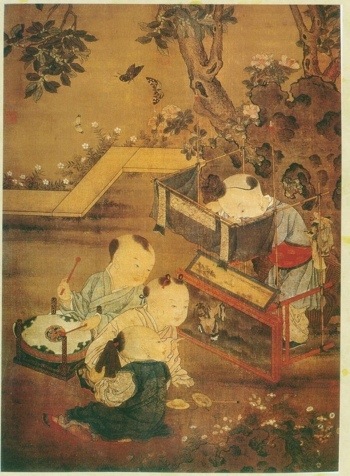 St. Paul in the thirteenth chapter of his first letter to the Corinthians says, “When I was a child, I spake as a child, I understood as a child, I thought as a child: but when I became a man, I put away childish things.” What are those things we put away when we pass from childhood to adulthood? In the painting above some children are putting on a puppet show. These might be considered childish things, though there are those that manipulate puppets to entertain adults. The Japanese playwright Chikamatsu Monzaemon wrote some of his most famous plays to be performed by puppets. Granted Chikamatsu’s plays probably dealt with more serious subjects than those found in the children’s puppet plays, still the play of children often imitates the behavior of the adults that surround them and the same may be true of the plays their puppets perform.

The song is from a collection of songs by Natalie Merchant that puts mostly children’s poetry to music. The song The Janitor’s Boy revolves around children seeking to find a place for themselves in an adult world, even if it is an uninhabited corner of the adult world. Perhaps the putting away of childish things revolves around working at being an adult as opposed to playing at being an adult, though I am not entirely sure if it is the child or the adult that is doing the playing much of the time. But for children it is a game of “let’s pretend” while for adults it is making ends meet and fulfilling very real obligations and responsibilities.

There was an article recently in the Guardian about the 70th anniversary of the children’s book label, Puffin Books; “Puffin marks 70 years by celebrating best ever books.” The article identifies what Puffin Books regards as their seventy best titles in a number of different categories. Many of these books are also adult books, The Adventures of Huckleberry Finn, for example, and Dracula. I remember reading when I just got out of high school that in England Moby Dick was regarded as a book for children, yet it is studied very seriously by adults who seem to be of the opinion the book was written with an adult audience in mind. Of course this line of thought might seem to suggest that the things we do and read as children are all childish, which is probably not the case. We do not put away everything we had as children, nor change all the behaviors we had as children, only the “childish” things and the “childish” behaviors. Perhaps an essential ingredient of maturity is the ability to recognize those qualities of our youth that should be preserved and brought with us into adulthood. 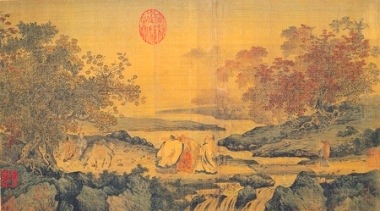 The three men in the painting are a Taoist, a Confucian, and a Buddhist. They were so engrossed in a conversation that they did not realize they were passing through a bit of land infested by tigers and as a result were unafraid. After crossing the bridge and realizing what has happened they laugh together. The painting is meant to suggest that the three religions practiced by the three men were truly one religion, I guess because the intensity of their beliefs as they discussed them actually protected them from harm. It might also be because that each in his own worldview saw the same event as funny and they all laughed in unison, and this laughter is what unifies them. The Bible mentions on one occasion that Jesus wept, but it does not explicitly say that he laughed. I like to believe this is because laughter was such a regular part of his life that it did not need mentioning. Perhaps the reason why Aristotle’s treatise on comedy was lost while his treatise on tragedy survives is because we need less help understanding the comic side of life and enter into it with greater relish, though there are those that see laughter as a superficial thing that lacks seriousness, who regard it as one of the childish things, though I would like to believe this view is less prevalent today than it was once upon a time. 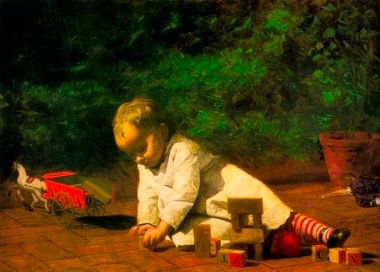 Perhaps one of the childish things we leave behind is the seriousness of play. In the paintings above and below we see children playing. The adults watch the children play at the beach but seem a bit restrained in their play, they certainly are not dressed to enjoy the water as zealously as the children. There are those in modern education that tell us we must prepare children for the world of work and behind that exhortation there seems to be a suggestion that the world of play must give way to the world of work, that work is real and play is frivolous. As a teacher I am one of the ones this exhortation is aimed at and I feel a bit conflicted about how to embrace this exhortation. For me, my work is a kind of play, not all the time, but much of the time and I would feel a bit of a fraud if I were to suggest the world of work and play cannot intersect. I think the most successful adults are those that have managed to convince others to pay them for what they would do for free. 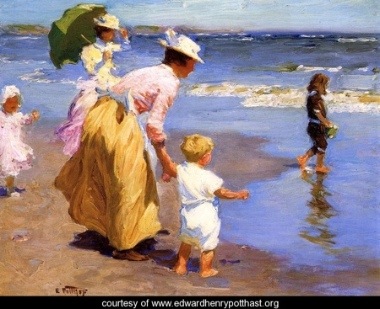 It is difficult to know at what point we go from being children to being adults. In many religions there is a ritual that is supposed to inaugurate our passage from one state to the other, but it is doubtful that maturity is a byproduct of ritual; it is more likely that the ritual serves to remind us that society’s attitude towards us and expectations of us have changed. But the passage of time by itself does not make us more mature, more “adult.” It is one of the goals of a teacher to help students not only gain a set of skills and abilities but to put them on a path towards wisdom and responsible adulthood. But what are the childish things that get put away? What is it that I, as a teacher, am trying to help my students leave behind?

Many of the behaviors we label as childish are behaviors we do not want to loose entirely. I want to approach the world as an adult with a sense of wonder, but “too much wonder” might border on naiveté and foolishness. I do not want to loose my playfulness but being “too playful” might be another sign of immaturity. I think that coming of age does not necessarily mean leaving certain behaviors behind so much as establishing boundaries and limits for those behaviors. It is, perhaps, recognizing the difference between a leader and a bully, between good cheer and flippancy, perhaps between a Mr. Micawber or Mr. Skimpole and a Joe Gargery. I often tell people that the passage of time makes me grow older but no power on earth can make me grow up and I think there is some truth to this. We have no say in the passage of time, but we do play a part in the shaping of our own characters.

The film is about a puppet that wants to be a boy and it chronicles his passage from being an animated toy to becoming a mature young child. The film is basically about the quality of the choices he makes and how he learns from experience. Pinocchio as he grows wiser does not give up play, he does not stop doing things that give him pleasure and enjoyment, he succeeds where many “real boys” fail because he learns from his mistakes, he becomes less foolish as the story progresses and wiser in the ways he plays. Perhaps this is what we all aspire to, to hold on to our capacity to have fun and to enjoy life; that though we may never become wise we, like Pinocchio, may succeed at becoming less foolish. 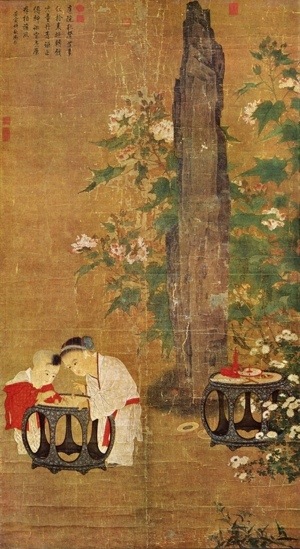 4 thoughts on “What We Put Away”