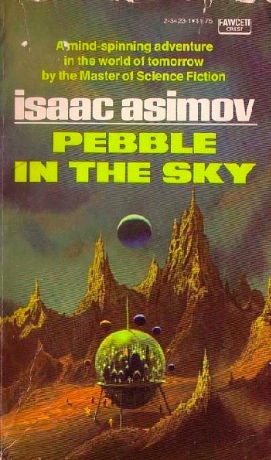 I grew up in the 1950’s and 60’s, my father was an aerospace engineer and I grew up with the space program. I also grew up with science fiction and the belief that very shortly, probably in my lifetime, we would be visiting other planets with an eye turned to other galaxies. Many thought that before long we would be seeing photographs resembling this cover illustration from one of Isaac Asimov’s science fiction novels. But somewhere between then and now other things began to occupy the culture’s interests. The song Longer Boats enjoyed a bit of popularity in the early 70’s and it is, as the singer tells us, about space ships. But the space ships never arrived, except in the movies.

In the movies the space ships brought two kinds of folks. There were those like ET who looked frightening to us (as we looked frightening to him) and the alien with his robot from The Day the Earth Stood Still who were either just curious and met us no harm or were actively committed to our welfare and saving us from ourselves. On the other hand there were those, like the folks in the Twilight Zone episode “How to Serve Man” or The Invaders from Mars that were committed to our destruction. There were also creatures like The Blob who were just hungry and had no real thoughts for us at all. 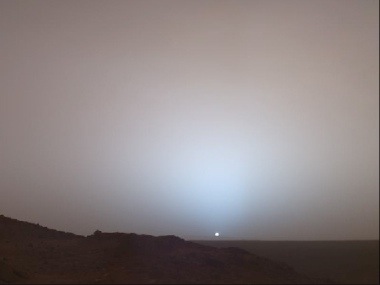 This photograph probably comes as close as any to resembling the cover art found on the science fiction novels of my youth. It is of the sunset on Mars and was taken by one of the Martian “rovers” that have spent quite a long time exploring the surface of this planet. It takes my breath away every time I see it. This is not a painting but the actual surface of another planet as it looked on a certain day. There are no people there to share in this experience only the machines we have sent in our place, but this is the real dirt and dust and mist of Mars. There are some for whom the spirit of exploration has not died who would like to see this story taken a step further and to see people walk this land. But I am not sure that there are any longer enough who are committed to making this happen. Our budgets are smaller and our interests closer to home.

There were a couple of articles recently, one in the Los Angeles Times on the science fiction novelist Kim Stanley Robinson (“Kim Stanley Robinson maps the future’s gray areas”) and one in the Washington Post on “New science fiction and fantasy novels” that remind us that science fiction as a genre has not gone away even if the desire to make it fact has somewhat abated. These writers often focus on this planet and how life on it might be different in the future or, in the case of Robinson in the past in ways that affect the future. Science fiction writers have always enjoyed imagining a future earth that has been transformed by human misbehavior. There is one story I particularly enjoy about a man working on his doctoral dissertation who is coaxed through an opening in the wall of his apartment to a parallel universe. What fascinates me about this story is that nearly every character in it is the man writing his dissertation at different points in time. But it was Ray Bradbury’s journey to Mars that awakened my imagination to the possibility of one day doing on Mars what the Martian Rover is doing now. 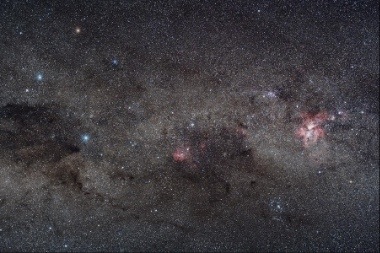 The image above is a photograph taken of a distant galaxy. I think it was taken from the Hubble telescope orbiting in space, but I am not sure. But it, and others like it, resembles paintings made by Jackson Pollack, or at least these photographs suggest Pollack’s paintings to me. I do not know if Pollack had an interest in science fiction or astronomy but this resemblance interests me. Is the universe, like a Pollack painting, somewhat chaotic in its organization or do the kaleidoscopic displays of colors and patterns in both the painting and the universe suggest creative imaginations that think alike. The resemblance certainly suggests that art does not need to be representational to be beautiful.

Perhaps the imagination that sees beauty in random placements of color on canvas is not unlike the imagination that sees stories in the stars. We look at the stars and see bits of color on a dark night sky but our ancient ancestors saw bears and hunters and creatures of various kinds going about their business. Perhaps what we call mythology was a kind of ancient science fiction. That those that told these stories got the same thrill from them that I got from Isaac Asimov, Ray Bradbury, and Robert Heinlein. I am told, and what I have read of the mythology suggest this is true, that the classical mythmakers believed the stories they told, that they were not merely the products of vivid imaginations but a kind of history. Plato believed (or suggested he believed) that those that told the stories of Homer and the other classical writers of myth were possessed, were not in their right minds, but a bit mad. Many think the same thing about Pollack and painters like him. Perhaps his is a mythic madness as well. 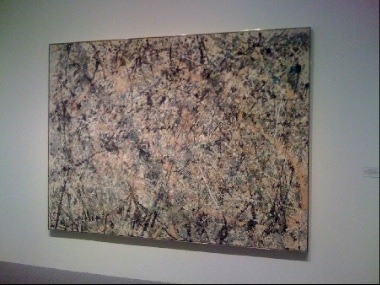 The stories change us though or at least they changed me. The myths from antiquity suggest we live in a universe populated by many strange and wonderful beings. The science fiction I read as a child and as a young adult and still read to this very day, suggest the same thing about the universe, that it is inhabited by strange and wonderful beings and if some of the beings that inhabit these stories are not kind or benevolent, well, the same was true of many of the beings that inhabited the popular myths of the ancient world.

But what makes a storyteller. As I have grown up I have seen film become the avenue of modern storytelling. I have seen its special effects grow from the sparks that propelled Flash Gordon’s space ship to the warp speeds of starships and the grace and elegance with which these starships moved. But it also seems that as the ability to make magic with special effects increased these effects started to replace the stories. Aristotle acknowledged the place of spectacle in story telling but he believed that spectacle oughtn’t to become the story but should always serve the story.

James Cameron talks here about his love of science fiction and of how that love helped to shape him into a storyteller. Like many skillful storytellers he has been accused of borrowing his stories from others. There is probably some truth to this; there are only so many stories to tell, after all. But he creates worlds where wonderful and at times terrifying things happen. Do his stories exploit their special effects, does the spectacle over shadow the stories his films tell? Some think so. But even if they have their limitations they are powerful. Personally I have been more troubled by the limitations of some of his actors than by the inadequacy of his stories. 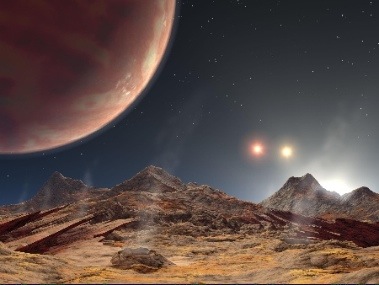 It probably does not matter that much of what happens in a good science fiction story uses flawed science, they are exercises in what might be and perhaps in the worlds they travel different rules apply. How would we be different if we orbited three different suns that appeared at different places against the sky? The three sunned landscape of this illustration has a kind of beauty and I wonder what kind of life could develop on such a planet. But how does imagining such things make life better on a planet with one sun?

There is something in the human character that is curious and wants to know even if there is no practical value to knowing a thing or in speculating about an outcome. Stories often help us to entertain this curious bent of the imagination. And it has often happened that in entertaining the mind with such nonsense great things have been accomplished. The space program may not have solved the world’s problems but it did give us Tang, microwave cooking, and the laptop computer. Jonathan Swift ridiculed the speculative scientists of his day by accusing them of attempting to pull sunlight out of cucumbers. Science may not have succeeded in pulling sunlight out of cucumbers, but they have given us ethanol, something not very different.

Is the object of science to make our lives better, to make us more comfortable, or to understand how to use our resources more effectively and to understand the forces of nature that have created those resources. If the former, science only has value if it can solve our problems. It must produce practical results or it is not worth the investment. If the latter the results are somewhat superfluous because the study of science is not about what it can do for us, but the knowledge it gives and the insights it provides into the universe we occupy. It has usually happened that this knowledge has brought with it practical applications that have solved many problems, but this is just a by-product and not a purpose. So, is the joke on Swift or on us? Perhaps it depends on whether we view science as an end or as a means to an end, as spectacle without much in the way of a story to tell or the intelligence, or an aspect of that intelligence, behind the scenes that drives the story.

3 thoughts on “One Day, Maybe”