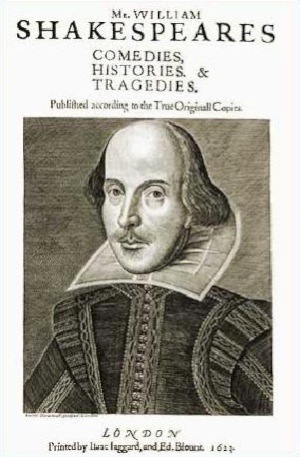 There was an article in the Guardian, “Plagiarism: in the words of someone else… there’s little new in literature,” a few weeks ago about plagiarism. The article tries to identify the difference between copying and plagiarizing. On the surface it would not seem there is a difference and perhaps there isn’t. Robert McCrum, who wrote the article, mentions an article written by Robert Greene, a contemporary of Shakespeare. Greene wrote the article on his deathbed and he called Shakespeare, “an upstart crow, beautified with our feathers,” or in more contemporary terms, a plagiarist. The charge is undoubtedly true in a literal sense, Shakespeare told very few original stories, but most agree that many of the stories he stole would likely have been forgotten a long time ago if he had not stolen them.

The song is an example of a more contemporary form of borrowing. The rap artist Darryl McDaniels (DMC) has taken some liberties with a song originally written and performed by Harry Chapin. Each listener’s taste in music may determine which is the better song or if both songs are not equally impressive in their own right. But is McDaniels a plagiarist for taking Chapin’s song, even if Chapin is listed first in the songwriting credits. Nor is McDaniels alone in borrowing bits from other artists. T. S. Eliot once remarked that many of his best lines were written by other people. A reading of The Waste Land, one of his best known poems, will reveal that many of the best passages are not original with Eliot. That said, though, most agree that Eliot has crafted a remarkable poem and even those that do not admire the poem recognize that the lines Eliot has taken from others serve Eliot’s purposes in the poem and not those of the original authors.

But what is plagiarism? J. D. Salinger is quick to take legal action against any work by another author that, in his view, too overtly borrows from his stories or intrudes into his private life. Just last year he brought suit in New York to prevent the American publication of a new book, 60 Years Later: Coming Through the Rye by J. D. California (the name of the author on the title page is a pseudonym for Fredrik Colting). The central character of the new novel is a “Mr. C”, but the title all but tells most readers Mr. C’s full name. Has Holden Caulfield become so iconic a figure in the culture that his name is no longer the private property of Mr. Salinger? Or is Mr. Salinger within his rights to try to block publication of a work of fiction that so overtly borrows from his fiction?

J. K. Rowling not too long ago successfully blocked publication of a Harry Potter reference book that, in her opinion, borrowed too heavily from her books; that did little more than quote passages she had written. If she was within her rights to stop publication of this book are the makers of the 1986 film Troll within their rights to sue Rowling for using the name of one of their characters, Harry Potter, in her novels? Ursula Le Guin said of Rowling, “She has many virtues, but originality isn’t one of them.” Is this just one author sniping at another who has had a bit more success writing about wizards and their school days? How original is any author, to what extent is any story truly new? Most stories resemble other stories that came before them, but for the new story to succeed it has to find some way of setting itself apart. For example, how like Harry Potter in the film Troll is Harry Potter in the series of books that bear his name? Whether or not the borrowing of the character’s name is coincidental depends on how closely the Harry Potter of the books resembles the Harry Potter of the film. In the case of the novel featuring Mr. C. the author is hoping readers will recognize Mr. C as Holden Caulfield and not take it as a coincidental resemblance. But than Shakespeare expected his audience to know something about a story featuring a Danish prince named Hamlet. 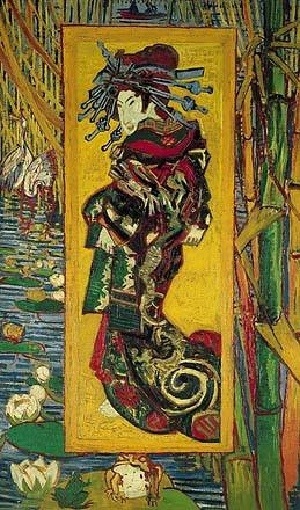 The Courtesan or Oiran (after Eisen)
Vincent van Gogh
http://en.wikipedia.org/wiki/File:Van_Gogh_-_la_courtisane.jpg

The paintings above and below by Vincent Van Gogh suggest other aspects of borrowing. In the first painting Van Gogh was clearly copying another painting by the Japanese painter Eisen. Van Gogh did this a lot; he felt that just as a musician could play music she or he did not writer so could painters borrow images from other artists. But what he did was not at all like what young art students sometimes do when they go to a museum and copy the paintings that are hanging there. Where young artists are trying to master technique and craft, Van Gogh, like Eliot, is using other images created by other artists to make his own unique statements. 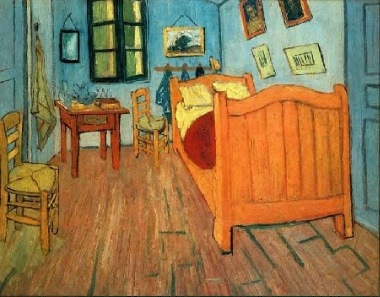 There are obvious problems with students passing off the work of others as their own, but are writers always plagiarizing when they make use of the work of other writers? When an author adapts the work of others to her or his own purposes, does this not make the work new? There is a difference between cutting an image out of one painting (or photograph) and pasting it into another and painting into a canvas an image from another painter’s work, especially if the image that is borrowed is iconic. I remember an old series from the Doonesbury comic strip in which Zonker wins the lottery and uses his winnings to buy a title; he becomes Lord Zonker, or some such thing. In one of the episodes Zonker buys a Monet and the Monet is hung in his apartment by the water cooler. The painting by the water cooler is clearly a Monet but I do not think of this image as plagiarized.

Most borrowing like that done by Shakespeare, Eliot, and Gary Trudeau depends on audience recognition of the borrowing to work its full effect. The borrowing is conscious and done with the expectation that the borrowing will be seen for what it is. However, what about borrowing that is unconscious. George Harrison was taken to court for stealing the melody of his song My Sweet Lord from an earlier song, He’s So Fine by the Chiffons. The judge in ruling against Harrison admitted that she preferred his song to the original but upheld the copyright of the composer of the original tune. Harrison had to share royalties both from the song and from the record on which the song appeared. Harrison had his revenge though. He had earned enough money from work he had done earlier in his career to buy the rights to the original song. Harrison maintained, though, that if he had borrowed the melody he did not do it consciously. Does this really make a difference? It may be a mitigating factor that the pirating of another’s work was not done intentionally, but the lack of intent does not alter the fact that the work itself is the property of another. 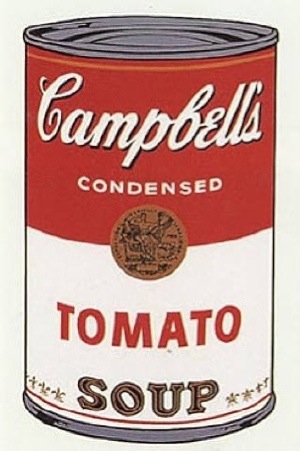 I grew up with Andy Warhol and his soup cans. Some took these paintings seriously and some saw them as silly or contrived. Growing up in the 1950’s and 60’s I saw these soup cans on television with great regularity and looked on the paintings the way some look at bad puns. The paintings were, to me, like those plays on words that elicited groans of pleasure from those that heard them. It may be that Warhol’s soup cans were an obvious and artificial representation of American consumerism and the advertising that promoted it, but the obviousness of the statement was only recognized after the statement was made.

A few years ago I developed an online course in which I used artwork to make points about the literature I was teaching. The paintings I used were painted many years ago and I took it for granted that the images were in the public domain and that I was free to use them. I learned in the process of assembling the materials for the class I was creating that though the original images, the paintings the painters created, were in the public domain, the photographs of them were not. So though the Mona Lisa has outlived its copyright, the photograph made of it may not have, in fact probably has not, outlived its copyright. The law was changed a year or two after I developed the course and I could now claim fair use of the images for educational purposes. Still, for the images I now use I rely on creative commons like that provided by Wikipedia as my sources. I do not want to infringe upon anyone’s right to earn an honest living from her or his work, even if that work involves capturing as accurately as possible something that someone else has created. 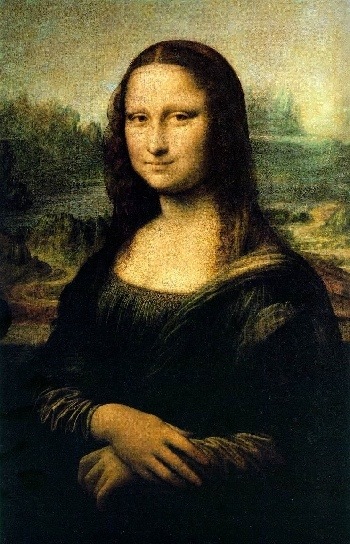