Reading all the Signs 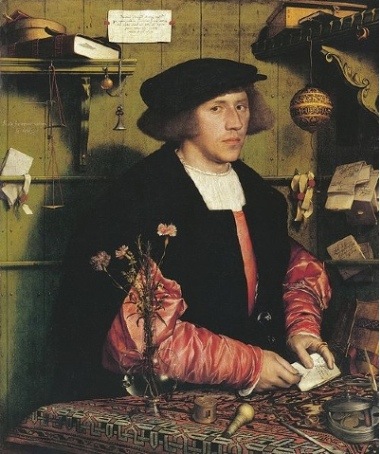 The song talks about taking “the long way home.” Often the shortest, and the quickest, distance between two points is not the most interesting journey. Just as a quick look at the painting will not reveal all the painting has to offer. When I was younger I rode a bicycle through England, Scotland, and Wales, Holland, Germany, and France. When I started my trip my plan was to hitchhike everywhere. When I left London I hitchhiked down the motorway to Salisbury. While I was there I walked to Stonehenge, about a ten mile walk from where I was camping just outside the town. It was a beautiful walk that made me aware of what I would be missing if I traveled the motorways. When I got back to town I went to the Salisbury Cycle Works and bought a ten-speed bicycle. They put a rack on the bike so that I could more easily carry my backpack. The second day out I went down a quiet country road in a valley beneath one of the houses in which Jane Austen lived. There was a woman by the side of the road selling strawberries and cream. I, of course, bought some and enjoyed the whole “Jane Austen” aura of the moment, a moment I would have not enjoyed on the motorway. I imagine the strawberry vendor was there for the benefit of tourists visiting Austen’s house, but I arrived early and was the only other person on the road at the time so I did not feel so much like a tourist.

The point is that it often profits us to take the long way and to not rush so much from place to place. I could have seen much more of Europe than I did if I had stuck to the motorway, but in another sense, though I would have covered more miles and visited more places I would not have seen as much. I also think that people responded to me differently riding a bicycle than they would have if I were rushing by car from place to place. I was a tourist and folks looked at me as such, but the bicycle initiated conversations that probably would not have been initiated otherwise. When the rack that carried my pack broke (because of the books I brought with me it weighed close to sixty pounds) a couple in a large black Bentley invited me to join them for tea by the side of the road. They could not give me a ride to town but they did give me a pleasant break from pushing my bike.

I made the journey that Chaucer’s pilgrims made from Canterbury to London (their return journey) in one day. I am not certain how long a trip it was for Chaucer, but my sense is that it took a couple of days. I went faster than a fifteenth century traveler, but not nearly as fast or as far as most twentieth century travelers. But it is not just that travel by bicycle is slower than travel by car, but that travel by bicycle puts you closer to the ground and to the rest of the landscape and because you are traveling more slowly many more of the small details are noticeable. In a car you may see the lichen on a stone wall, but you would miss the rabbit lunching behind it.

There was an article in the Guardian last week, “You can’t speed read literature,” about the way we read (or ought to read) literature differently from the newspaper or a textbook. When we read the paper or a textbook we are generally reading for specific information and are less concerned with the subtleties of language or the sound of the words in combination with one another. Our goal is to just get through the material and do whatever we need to do with the facts we have gleaned. But when we read literature, the way the words interact with one another and the phrasing and the figurative language that are used are the source of much of the pleasure we get from the experience. Literature cannot be read quickly, not if we are to enjoy all it has to offer.

A novel can be read quickly for the plot line, to get the gist of the story, but for those that read literature as literature that is not the point. May Sarton once said, “I used to tell my students situation and character are life to a short story and plot kills. Plot kills something, there is no doubt, and in the kind of writer that Katherine Mansfield was, plot is not the point. It is something else. The same thing with Virginia Woolf. You might say that in To the Lighthouse very little happens except inwardly, in the characters, but people go back to reread books where not much may be happening but a great deal of life is being created.” We speed read for plot, we read carefully for character, situation, and to find the other interesting things a great writer can do with language. Those who travel the motorway from Canterbury to London in a few hours have made the same journey as those that make the same trip by bicycle in the course of a day or at least they cover the same ground. But is it really the same journey? 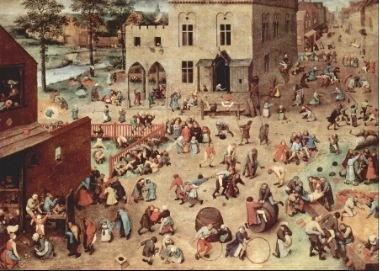 As with the painting at the top of the page, in this painting by Breughel there is a lot to see and though a quick glance may be enough for us to enjoy the use of color and the superficial construction of the scene there is much too much happening in the painting for us to get much of its real value from a momentary glance. Every one of the little groups that fills the painting depicts or suggests a different children’s game. To fully enjoy the painting attention needs to be paid to each of the games and the way each game is suggested by what the characters in the painting are doing. It is necessary to spend time with things of value if their full value is to be appreciated. 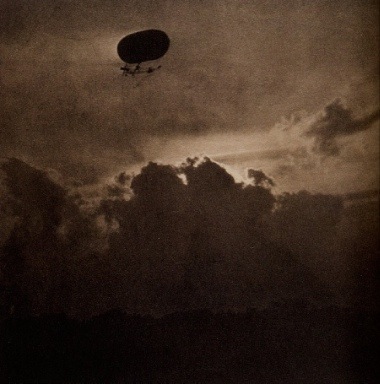 The photographs above and below suggest other reasons to linger over things. The dirigible in the Stieglitz photo, to me anyway, is kind of mysterious. It evokes the wonder of flight. The sun gilding the edge of the clouds suggests the rising or the setting sun, we cannot really tell if it is dawn or dusk or if the clouds are just hiding the sunlight. But the dirigible itself is captivating. The way the gondola hangs beneath the sausage shaped balloon is intriguing to me. It suggests a sailing ship in flight. For me there is also an eeriness to the photograph, something mysterious that I do not fully understand that reminds me of something from a Jules Verne story.

The Adams photograph provokes, or at least it does in some, a meditation on the natural environment and its wild and sublime beauty. It invites us to linger over it, to pursue its details and enjoy the landscape that it captures. There is a similar play between light and shadow, between the ominous and the comforting, that is found in the Stieglitz photograph. Both the storm in the mountains and the currents in the river suggest the power of nature and its potential dangers. 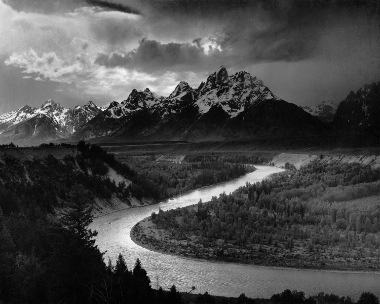 The Tetons and the Snake River
Ansel Adams
http://en.wikipedia.org/wiki/File:Adams_The_Tetons_and_the_Snake_River.jpg

There were two reviews in the Washington Post of modern translations of stories from fifteenth century England and Italy. One was of Peter Ackroyd’s prose translation of Chaucer’s Canterbury Tales, “Book review: ‘The Canterbury Tales: A Retelling’ by Peter Ackroyd,” and the other of Ludovico Ariosto’s epic poem Orlando Furioso, “Michael Dirda reviews ‘Orlando Furioso’ by Ludovico Ariosto.” Both of these stories have been personal favorites and that they still generate enough interest to warrant a new translation is encouraging to me, though I am much more surprised about the Ariosto than the Chaucer, who has always been popular in the English speaking world. I think Ariosto repays the time that is spent with him and it is a pleasant thought that many more will perhaps spend some time with him. For me he is like a cross between J. R. R. Tolkien and Jonathan Swift in that it marries the heroics of the one to the comedy of the other. Enjoyment can be gotten by speed reading each of these books but there is so much in each to be savored and lingered over that is sad to think that some could be satisfied with such a meager offering, sort of like taking a single bite from an ice ream cone and throwing the rest away.

A film is experienced differently than a book or a painting. One cannot take more time over a film than the film takes to run, well one could, but that would defeat the purpose of the film and probably do some harm to its enjoyment. But careful attention needs to be paid to what happens on screen. In the film clip from Jacques Tati’s Traffic much of the humor can be missed if the viewer does not pay attention to details, like the movements of the individual drivers after the accident or to the debris and the way it moves through the scene. The film is a French film but it is not necessary to understand the language (though I think it is has been dubbed in English) to enjoy the comedy, so much of the humor is visual.

It is not just the spending of time, though, but how the time is spent. One person may read a book slowly because they do not understand the words and have to read and re-read to figure out what is happening while another may take the same amount of time reading because she or he is paying careful attention to the details of the story and the manner in which those details are conveyed. I think the increasing speed at which we move through life makes us less willing to spend time wresting with the written word when we do not understand and can leave us satisfied with a superficial reading when we do understand. Because of the numerous distractions that are available in the modern world, many students do not want to build the language skills necessary to fully understand and enjoy a work of literature.

Thoreau felt, when life went quite a bit more slowly, that we spent too little time with ourselves and the world around us. We probably spend even less time with ourselves and our environment today. I suppose reading and reflection are a kind of mental exercise that many want to avoid in the same way they avoid calisthenics and other forms of physical exercise. In the same way we struggle with delayed gratification in the manner we run our finances we often struggle with delayed gratification in the manner we develop our intellect. As our enjoyment of a thing we desire is often more perfect when we take the time to save up for its purchase, as opposed to using credit of one form or another, so is the object of our study, whether of a text, a concept, or a science, more perfect when we take the time to fully understand that study. There is a difference between knowing and understanding and that difference is often the product of time.