The Silver Tongued Devil and I
Kris Kristofferson

Who Do You Think You Are 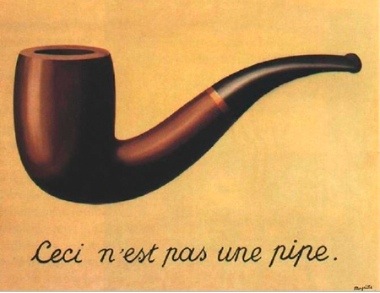 “The Treachery of Images” (1928-9) or “This is not a pipe”
René Magritte
http://en.wikipedia.org/wiki/File:MagrittePipe.jpg

Kris Kristofferson sings of someone who is in a kind of denial for it is clear from the lyric that the “silver tongued devil” and the persona of the song are in fact the same person. The persona may not approve of the actions of his alter ego and it may be in fact the “beer” talking and not himself but like it or not the actions are his actions. Who we are and who we think we are often are very different people. My students are beginning Shakespeare’s play Macbeth. Macbeth sees himself as a pretty good guy, he wants to be liked by his peers, but relatively early in the story he allows his ambition to overtake the “better angels of his nature.” The Macbeth at the end of the play may be unrecognizable to the Macbeth of the play’s beginning but they are the same person. Or are they?

The painting is captioned “this is not a pipe” but the image is indeed of a pipe. Of course the image of a pipe is in fact not a pipe, I cannot take this pipe and smoke it, for example. So the painting is and is not a pipe. By the same token the photograph of me found in my passport taken back in 1972 is indeed a photograph of me. But are the person in that photograph and the person writing this the same person? Emerson would say something one day he would disavow the next. Are the Emerson making the statement and disavowing the statement the same person, the same Emerson? At the heart of literary analysis, among other things, is character growth. Characters that do not change in the course of a story are, generally, weak characters. Yet we expect consistency of thought from the people around us, and believe changing one’s mind is a sign of weakness. Heaven help the politician, for example, who has a change of heart.

The Humphrey van Weyden we meet at the beginning of Jack London’s novel The Sea Wolf cannot save himself, he cannot even call out to others to save him. He is totally helpless. The Humphrey van Weyden, “Hump”, at the end of the novel is a very different and much stronger and more competent human being. The Hump of the beginning of the novel bears no resemblance to the Hump at the end of the novel. But, under the law anyway, they are the same person. On the other hand, at the end of the novel Wolf Larson, Hump’s nemesis through the book, is largely unchanged. In part this is because he has already thought through his views and made judgments about how the world works that time and experience have shown to be sound. But also Wolf is set in his ways, he has reached his conclusions, no one has been able to effectively challenge those conclusions so he sees no need to change, even when confronted with an alternative view of things that is thoughtful and experiences that ought to cause him to question at least some of his conclusions. In life, as in stories, those characters are strongest who can grow and change and adapt to changing circumstances. 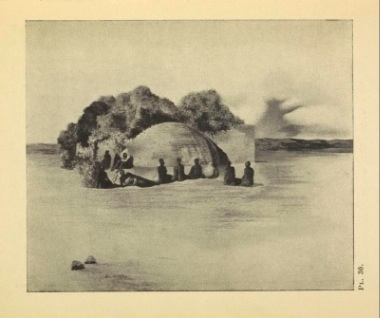 Looked at one way this is a drawing of some people sitting on the beach, looked at another way it is a human face (according to Andre Breton the face of Jean Paul Marat, or so he said of the photograph that inspired the drawing). How we see ourselves and how others see us may suggest another kind of illusion, just as the people we thought we might become do not always resemble the people we have in fact become. In George Eliot’s novel Middlemarch we are confronted by characters with great aspirations for the future, some are taking their first steps towards achieving these aspirations while others have been working towards theirs for some time already. Some of these ambitions are noble and altruistic, others are shallow and self-serving but few are realized. There is a doctor who hopes to reform the practice of medicine but ends up writing a treatise on gout, a disease mostly of well to do old men, there is a scholar who plans to synthesize all the world’s mythic systems but dies before he can do so, there is a wealthy politician with a past, as well as a would be politician without much of a past.

Most of the characters in this novel have high ideals but they make foolish choices and as a result must face real consequences. Most learn to carve a bit of contentment out of the poor choices they have made but they never fulfill their aspirations. When I finished the book I felt Dorothea Brooke proved willing to make risky choices to achieve some personal happiness and I thought she ended well, but not all agree. Still, we are told she made others’ lives better. Perhaps in life that is worth more, and perhaps is more satisfying, than a more “public” success. It certainly illustrates the choices that confront most of us, we can choose safely and attain a modest contentment perhaps, or we can take risks and perhaps achieve some of our higher aspirations, or perhaps not. Life is often this way.

The film Rashomon is about point of view. A crime is committed and it is observed by four different people from four different perspectives. The angle from which the event is viewed determines how it is understood and interpreted. Depending on whose perspective is accepted a crime either was or was not committed. Whose perception is correct? To what extent does this mirror life? Some would argue from a story like this that we cannot know or understand reality, there are too many obstructions between what we perceive and what is, that all life is relative. There is some satisfaction to be gotten from this view in that it enables a person to avoid making judgments about events, and hence, having to take any action in shaping those events.

But I think the story illustrates that, though we all have to act according to our own understanding of what is happening around us, we may want to reserve judgment and keep an open mind. Choices are often difficult, it may not be possible to know all that we need to know to make those choices with certainty, but the choices themselves may be inescapable and need to be made. We can only do our best. I do not know that this kind of story provides comfort or satisfaction, but it does capture an aspect of life that it is important to think about. This is an important service that books, film, and other forms of story telling provide. 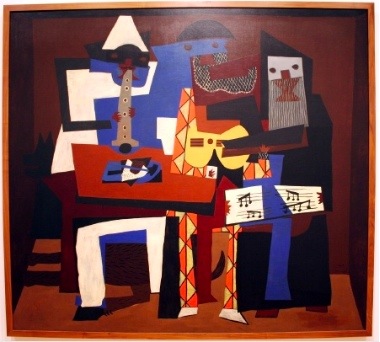 The painting is called Three Musicians. But is this really what the painting captures. One musician is dressed in white, a color associated with purity and with weddings. White is also a color often associated with angels, at least the good ones. I mention this only because the other musician is all in black, a color associated with death and the angel of death. As white is often associated with goodness, black is often the color of evil. Then there is the musician in the middle who is dressed something like a clown, he is dressed in motley, the traditional garb of the clown. Are the musicians on his right and left, then, his good and evil geniuses? This is another story to be told and understood. Maybe they are just, as the title says, three musicians with very different tastes in clothes.

There was an article a few weeks ago in the Guardian about the American novelist, Philip Roth. The article by Alison Flood, “Philip Roth predicts novel will be minority cult within 25 years”, summarizes an interview that Roth gave to Tina Brown, editor of The Daily Beast. In the interview Roth contends that the day of the novel has passed and that though the novel will survive, it will have only a “cult” following. I hope this is not true. The novel, like few other art forms, enables us to imagine the world and how people behave in the world. Unlike a film it can take its time to spin its story so that the reader can have a greater insight into the emotional, psychological, and intellectual lives of characters, and see how these characters respond to the situations they encounter. We can see how characters’ lives are shaped and changed by events and how those events change the emotions, the psychology, and the thinking of the characters. Granted it is all made up, all a fiction, but it does help prepare one for the choices and complexities of life. Aristotle believed fiction was superior to history because it showed us what might be not just what was. He felt it was superior to philosophy because it gave us the opportunity to see philosophy put into practice and lived out so that we can see how this philosophy holds up to the pressures of daily living.

There is a story told of Thoreau and the night he spent in jail that Emerson came by and saw Thoreau in jail. He asked Thoreau what he was doing in there. And Thoreau responded that the better question is what are you doing out there. Thoreau was acting on a principle that he learned from Emerson, that the only place for a just man in an unjust society is in jail, a principle Emerson himself was not putting into practice. I do not know if this story is true, I have heard that it is apocryphal, but it illustrates Aristotle’s point that formulating a philosophy to live by may be easier than living by that philosophy and story telling gives us the opportunity to see what pressures the world and daily living will exert upon our philosophies. The picture below is of a waterfall, but is the water in fact falling? I suppose it depends on how you look at it and where you focus your attention. 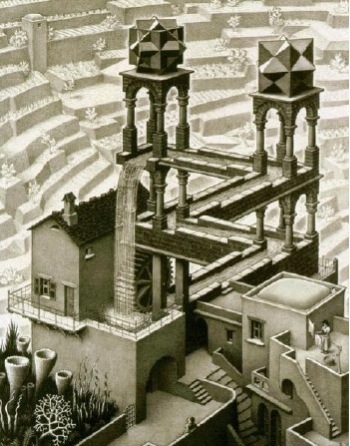