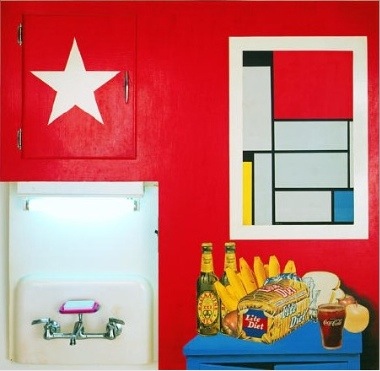 There was an article in this Sunday’s Boston Globe on the cliché. It was called “Let us now praise… the cliché”. The article points out that often clichés convey bits of useful information and folk wisdom quickly and somewhat universally, universal at least to the culture that created the cliché. The opening to Beethoven’s Fifth Symphony has become a bit of a musical cliché, in that it is well known and carries a certain meaning that listeners are quick to recognize, it has in a way become a cliché for Beethoven’s symphonic work and classical music in general. The work itself is not clichéd, or at least it wasn’t when it was first performed but it has evolved into one. The clip from Mendelssohn that accompanies the Beethoven clip employs a musical cliché of sorts from the Protestant Reformation, Martin Luther’s hymn “A Mighty Fortress Is Our God.” Because this piece of music is so recognizable it conveys quickly a musical idea that gives its name to the symphony as a whole, it is often referred to as the Reformation Symphony.

The painting also makes use of clichés. The door to the cupboard above the sink suggests Chairman Mao’s Little Red Book being a red square (a cliché in and of itself) with a white star, the symbol of Communist China. The white bread, a cliché for wholesomeness, placed strategically next to another grain product that is a bit less wholesome. Then there is the Coca Cola glass, which is another cultural icon/cliché. The Piet Mondrian painting above the bananas is also a bit iconic, especially as it is representative of a kind of modern abstract painting. These components of the painting, because they are clichés, convey quickly a certain depth of meaning to the viewer that enables the painting to succeed as a comment on American culture of the early 1960’s. The painting is from 1962, before the Vietnam War dominated “popular culture.” The colors and the “product placement” suggest the conflict between Communism and Capitalism or perhaps the consumer culture of America.

As a teacher of writing I am usually encouraging my students to avoid clichés. Because clichés are by definition overused they tend to reflect badly on a piece of writing and make the writer appear to be a bit unimaginative. I am not sure that it is always necessary to find a new way of saying something that can be said effectively by a more commonplace phrase, but that is the “conventional wisdom.” As the article points out, many clichés are still around because they “say best what needs to be said” and we will have to wait and see if any of the substitutes writers struggle to invent will go on to become as successful, though, as the music of Beethoven may suggest, this success is something of a “two edged sword”.

It also important to be careful with clichés and how we use them. Sometimes clichés are used as a way of avoiding a real problem or of ignoring an impending problem or, perhaps, as a way of avoiding a little extra work. “Why”, for example, “reinvent the wheel” may be a way of avoiding the work of reinventing something that needs to be reinvented. We do not, after all, use wagon wheels on automobiles, so at some point it was indeed necessary to reinvent the wheel and it may not always be easy to tell which came first the “automobile” or the “reinvented wheel.” Some will tell us “if it ain’t broke, don’t fix it.” But just because a thing is not currently broken does not mean it is not in the process of breaking and a bit of preventative maintenance may be “just the ticket.” A cliché, like any piece of writing, needs to be judged by the circumstances in which it is employed. Some may always be dubious, but others may at times still serve a useful purpose. It is also very difficult, at times, to find a phrase that is not on some level clichéd. Is, for example, the phrase “serve a useful purpose” a cliché? Is it an over used expression? Some might think so. Others may see in it an avenue to a more economical compositional style. 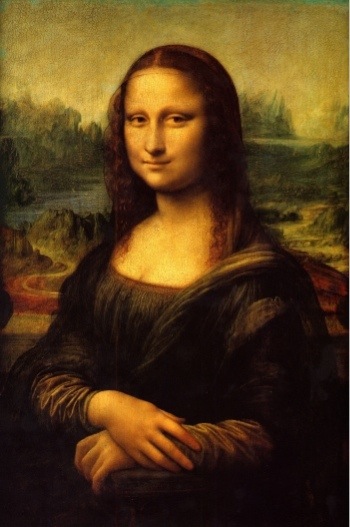 The paintings above and below are not unlike the two pieces of music, one having become a cliché and the other playing games with clichés. It is a danger for an artist who does something too well that that something may eventually become a cliché. Leonardo da Vinci is almost a Renaissance cliché in and of himself. He is often pointed to as the definition of the Renaissance, an inadequate definition in that he did not represent all areas of cultural advancement with which the Renaissance is associated but probably he was adept at enough of them to make the comparison work. C. S. Lewis said, “For it must be noticed that such dominance (the dominance of a literary form in any given age) is not necessarily good for the form that enjoys it. When everyone feels it natural to attempt the same kind of writing, that kind is in danger. Its characteristics are formalized. A stereotyped monotony, unnoticed by contemporaries, but cruelly apparent to posterity, begins to pervade it.” This is often the fate of the cliché, whether in painting, music, literature, or any other art form. It is because Beethoven’s Fifth (or the opening anyway) has become clichéd that the music often evokes a comic response when there is not necessarily anything comic in the music. Or is there? Was Beethoven being a bit over dramatic to serve a kind of satiric purpose in the music? Does the musical cliché it has become serve the musical purpose for which it was created? I am not sure. I do not think there is a comic intent behind the Mona Lisa but it has devolved a bit into “kitsch” because of the place it holds in the culture. 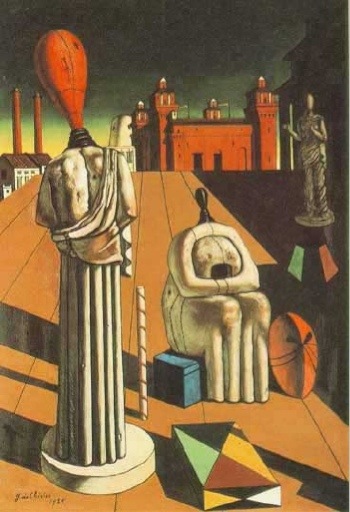 The painting by Chirico plays with iconic forms from classical art for comic purposes and, probably, social commentary as well. It also plays with allusions to classical culture when it plays with the muses from Greek and Roman myth. There is the juxtaposition of the castle, a Renaissance cliché with the factory, a modernist cliché. The muse in the background appears as a conventional human likeness while the muses in the foreground have . . . well I am not certain what they have for heads. The colored box suggests the motley costume of the clown Pierrot from the Comedia del Arte. But are these in fact clichés or are they archetypes or symbols that add richness and do not in any way detract? For an icon of any kind to work it must be readily identifiable with that which it represents and it is this quick identification that gives it power. The issue is not so much the cliché as it is its use, is it a kind of laziness that enables us to avoid thinking deeply about something by letting the cliché do the thinking for us, or does it evoke ideas that lend a bit of depth to the issue being examined.

Ed Wood enjoyed a moment of popularity a few years back when a film biography was made about him. But what made Wood an attractive subject for this film was the excruciating excess of cliché and poor production techniques that characterized his films. These excesses made them comic, though comedy was not the Wood’s intent when he made the films. From the clip it can be seen how on one level there is almost a Monty-Python-esque humor to them. The characters are so over-blown and caricatured that it is difficult to take them seriously. Groucho Marx once said of Margret Dumont that she was the perfect foil for the comedian because she did not get the jokes. Others disagree with this assessment, but perhaps it has some truth in regards to Ed Wood, maybe he was a film comedian who did not get his own jokes.

Still, the problem with Ed Wood and taking him seriously as a filmmaker is that he did not seem to understand when a film convention had been overused. Films are full of clichés and conventions, even very good ones. Sometimes these are used to point the viewer in the direction of the filmmakers influences, as when Harrison Ford makes his way across the bottom of the German truck in The Raiders of the Lost Ark. Spielberg is paying a complement to John Ford by evoking a scene from one of his films, Stagecoach, where John Wayne does something similar traveling underneath a stagecoach. It works like an allusion in literature to an earlier piece of writing. These allusions add richness to the film as they add richness to a poem or story. It is not necessary to understand the allusion for the scene to work, but it gives an additional level of pleasure to those that understand the allusion. They remind us that most works of art are produced by a culture that has a cultural heritage full of symbols, archetypes, and images that connect the parts of the culture to the whole. 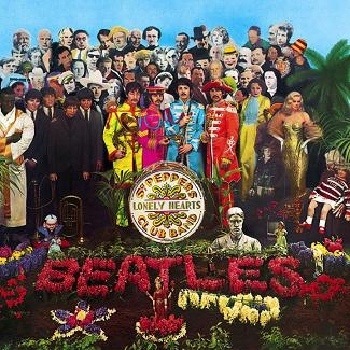 Front Cover for the LP Sgt. Pepper’s Lonely Hearts Club Band by the artist The Beatles.
The cover art copyright is believed to belong to EMI Records, Ltd.
http://en.wikipedia.org/wiki/File:Pepper%27s.jpg

If we look at the images that fill the album cover of The Beatles record Sergeant Pepper’s Lonely Heart’s Club Band we will see figures from throughout the culture, including an early version of The Beatles behind the more current incarnation of the album’s release. But amongst the crew that surrounds them are comedians and cowboys and film stars; writers, scientists, and clergy. There does not seem to be much that is left out. What is the point of putting all these images into the cover? Does it make a commentary on the music or is it just there to catch the eye of the record buyer to help sell the record? Often clichés are comfortable because whether they serve a real purpose or not they do not usually ask much of us or even if they do, it is not that difficult to avoid the work they invite us to perform by just focusing on the cliché itself. This is perhaps the ultimate weakness of the cliché, that even if it is intended to serve a higher purpose and the writer or artist is not being lazy in the use of the cliché, it is still very easy for the reader or viewer to be lazy in her or his interpretation of it.