When the World Change 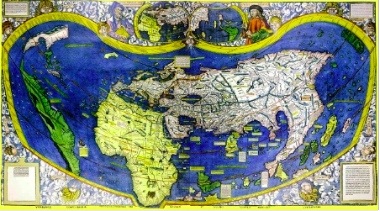 Some see Elvis Presley as the beginning of rock and roll, that his popularity signaled the end of one kind of music and opened the door to another. Some think he introduced to white audiences music that was already popular with black audiences and that he profited a bit off the work of others. Of course, and this may just be me, the names that come most immediately to minds after Elvis’ when the discussion is 1950’s rock and roll are Chuck Berry and Little Richard. After all, it is not Elvis Michael J. Fox imitates in Back to the Future but Chuck Berry. Still, whatever one thinks of Elvis, popular music became a different world the day Elvis topped the charts.

The map above is also credited with changing the world, at least according to Toby Lester in “A world redrawn” an article that appeared in this weekend’s Boston Globe. Copernicus was born into a world that believed the planet earth occupied a sphere of water and that the only reason the planet was not completely submerged was because this sphere of water was set at an angle so that half the surface of the earth could keep its “head” above water. This would place the Eastern half of the world above water and the western half under water. Not many scientists of Copernicus’ day took this cosmological model seriously, there were too many observable contradictions, but there was no opposing system and the existing order of things had become a part of the religious beliefs of the day, a day that did not treat kindly those that challenged its beliefs.

According to Lester, when Copernicus saw this map the “submerged earth theory” became untenable, because according to the map, there was a continent filling that half of the globe that should be under water and though this continent looks nothing like the North and South America of our maps today, it was enough. Once the sphere of water evaporated and Copernicus took a second look at the heavens other cherished beliefs, like the sun revolving around the earth, were seen to be problematic. Lester believes that this change was possible in part because Copernicus did not live in an age that was given to specialization; he lived in an age that could see connections between the earth’s geography and that of the heavens, just as Einstein’s work with clocks in the Swiss patent office contributed to his work in physics and helped him to visualize his theory of relativity. 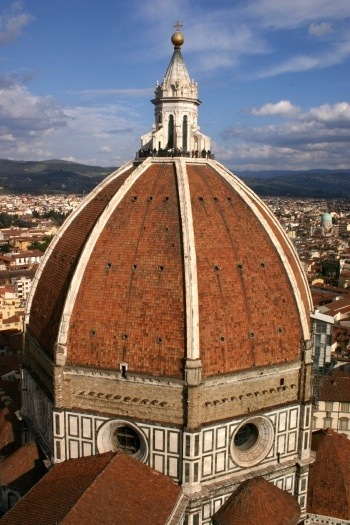 Brunelleschi is known mostly as an architect, but he is credited with figuring out the rules of perspective in drawing and painting. Painting prior to Brunelleschi’s discovery was somewhat two-dimensional. Medieval artists had a sense of perspective in that buildings often had corners and the like, but space and relationships of size were depicted poorly. With perspective came paintings that captured space very well. It became popular to paint frescos on walls and ceilings of buildings that created the illusion they went on forever. In theater perspective drawing produced a kind of scene design that was stunning in its evocation of space and distance. Of course there was only one seat in the house where all the lines of perspective worked perfectly. This seat was called the “eye of the duke” because, of course, only the town’s most privileged citizen was permitted to occupy that seat, at least at performances.

I think it is interesting that Brunelleschi might never have abandoned his trade of goldsmith, and as a consequence not have gone on to develop perspective drawing, if he had not lost the competition to design some Baptistery doors for a church in Florence. A college professor of mine said Brunelleschi painted a panel depicting the Florence Baptistery that illustrated how perspective painting worked. The doors of the Baptistery were perfect in every detail except that Brunelleschi substituted his doors for those of Ghiberti, the gentleman who actually won the competition and designed the doors that would be seen by anyone actually visiting the Baptistery. I do not know if this is in fact true, but it is one of those little stories that is, in the words Foucault, “so beautiful it must be true.” 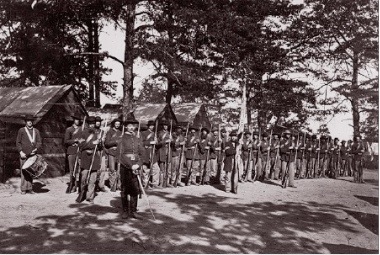 The image below acts more like commentary on an event than as reporting on an event. The Cartier-Bresson photograph is literally a “bull’s eye” view of a bullring. It is difficult to tell if the photograph is a collage, is the man seen through the open doors looking through a window, for example, the same man with the glasses and cigar that faces us? The open gate is the gate through which the bull would enter the arena and the photographer is standing in the bull’s path, were the bull actually entering the arena. The photograph has become an art form in its own right. It is no longer a mere adjunct to the story a reporter tells, but becomes its own story, its own unique form of reportage where each detail of the photograph sends its own message, is its own paragraph in the story the “reporter” tells. In this sense the photograph has changed the world of story telling. 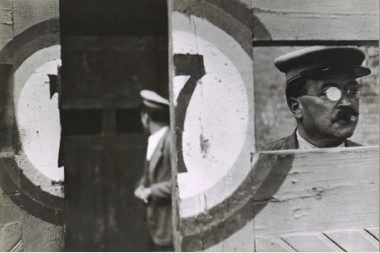 In an article for the Huffington Post Adam Peneberg reports that “It’s the End of the Book as We Know It (And I Feel Fine)”. The article is about the influence of the Kindle and what it may mean for the future of the book. He seems to think we are in the midst of a Guttenbergian revolution, that the book is taking a great step forward and that it will never be the same again. This may be true, it feels like it is, but of course, the problem with predicting the future is that no one knows what tomorrow brings. Steve Jobs left Apple in the 1980’s and developed the “NeXT” computer that was to be the wave of the future. He had credibility; he had been responsible for the “Mac” after all. But NeXT never caught on, though some of its innovations may have gone on to find a home in other technologies., and Jobs is back at Apple. Perhaps Kindle has changed the world a bit but we may have to wait a day or two to find out.

The Wonderful World of the Brothers Grimm
Metro-Goldwyn-Mayer

Abel Gance in his film Napoleon introduced the triptych of Medieval and Renaissance art to the cinema. He put three screens next to each other and projected three separate moving images that created one panoramic landscape. It was thought for many years that this film was forever lost, though it was rediscovered in the 1970’s. Though the film was believed to be lost, its technological innovations had been passed along by word of mouth. In the 1950’s Cinemascope was developed as a technology for making films. The clip above from The Wonderful World of the Brothers Grimm is an example of a film shot in Cinemascope. There are brief moments here and there throughout the film where the three screens become visible. This widescreen technology changed the way films were made. Before this the film lived in a box, after this it came to inhabit a wide and narrow rectangle. There is something about the box that is claustrophobic and something about the rectangle, the longer and the narrower the better, that is panoramic. 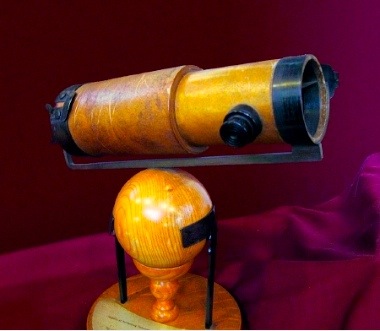 Little things often produce great changes and those that pay attention often see what is coming early on. Perhaps it is those that see the changes taking place the earliest that are the ones that profit most from those changes when the changed landscape becomes visible to the rest of us. There is always a case to be made for being attentive and open-minded. Perhaps the Newton telescope is indicative of this. Those that looked through the Newton reflecting telescope saw the same universe as those looking through the more conventional “refracting” telescope but Newton’s telescope presented a clearer more accurate picture of what he astronomer was looking at and this suggests that it is not only important to look and be vigilant, but to use those tools to aid our vigilance that present the clearest view of the changing world.