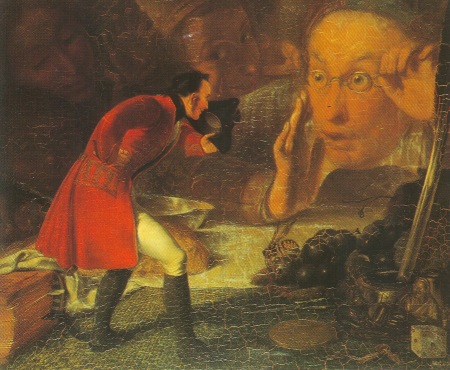 The reading we do always takes us somewhere. The places that we travel to may be real, they may have been real once, or they may have only ever been real in the imagination of the writer and her or his readers. The song is about an imaginary journey, a journey on a large dog with ears like enormous wings that can fly a person “around the world in half a day.” That is quite a journey. I do not think the song expects to believe this journey ever took place; it is a kind of tall tale that colors our literature. From Sinbad and the Arabian Knights to the journeys of Alice and Mr. Toad story telling has often involved journeys like the one in the song and even if they are not believed they are enjoyed. All reading is a journey and like with most journeys those that make the trip learn something important from it.

Often these journeys are metaphors for other things. The painting above illustrates a scene from Gulliver’s Travels. Gulliver has just been discovered by the Brobdingnagians, a race of giants living just off the Oregon or Washington Coast, if Swift’s map is to be believed. On a previous journey Gulliver went to a land of tiny people, the Lilliputians. In Swift’s story size often is a metaphor for the size of one’s mind and the openness of one’s attitudes towards those who are different or behaviors that are unusual. The Emperor of Lilliput is a small minded and petty man. Not all the Lilliputians are small minded, but most of their leaders are and the attitudes of the leaders seem to permeate the society. On the other side of the coin, the Brobdingnagians are not large minded and big hearted because they are oversized, but their king, for the most is, and it is this open mindedness that the king tries, often to encourage in the general population.

There was an article in this weekend’s Boston Globe on metaphorical thinking. The article, “Thinking literally”, suggests that there is a relationship between the metaphors we use and the literal meaning of those metaphors. If we are warm, for example, we are often “warm” in our reception of others, or so the article suggests. If this is true it would stand to reason that giants with large hearts would be big hearted and gracious to those a bit smaller than they are. Perhaps there are limits to how far this literal interpretation of metaphor can be taken, but in the Swift’s story there does seem to be a correlation between behavior and metaphors of scale. 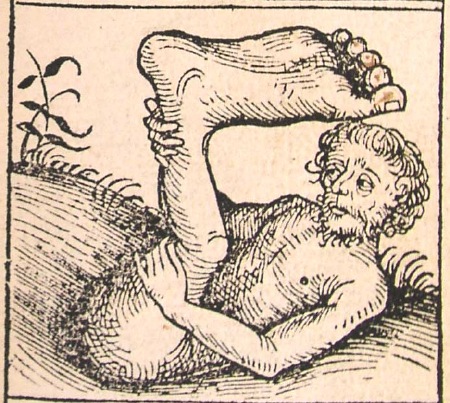 Woodcut from the Nuremberg Chronicle

The illustrations above and below depict scenes from two the journeys of two famous explorers, Sir John Mandeville and Marco Polo (though the image below is not from Marco’s time it captures a bit of the architecture that he saw). I do not know if Mandeville went to the places he claims to have visited, but he knew what the people of his day would have expected him to find if he had gone to those places. Mandeville may have gone and chose not to describe what he found but what he was expected to find, folks, for example, with one large leg and a foot that could serve as an umbrella of sorts to keep off the African sun.

Marco Polo on the other hand describes things that he did in fact see and experience and if others had followed in his footsteps they would have seen these things as well. This is one of the benefits of reading of the exploits of others; we have the opportunity to visit places we might not otherwise be able to see. In the case of Mr. Polo’s journey we cannot possibly see what he saw because time has changed these landscapes but by reading his book we can still share in his experience, we can be amazed by the exotic landscapes and the people that shaped that landscape. We can become fifteenth century gentlemen in a strange land. Richard Rodriguez in an interview with Bill Moyers many years ago said that in reading books written by people different from himself he could become those people, or at least see himself in them. He could, he said, become Armenian and African-American by losing himself in the worlds created by Armenian and African American writers. I think there is some truth to this and it is in these experiences that we are able to escape for a time from the limited world of our own experience. 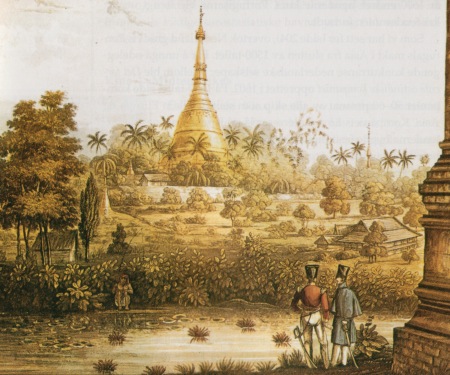 There was an article in the New York Times a week or so ago about Alan Furst’s new novel, the Spies of Warsaw. The article, “Love. Death. Intrigue. Warsaw.”, is not a review of the book but an exploration of the Warsaw and Pre-World War II Poland the book describes. The author of the article, Steve Dougherty, compares present day Warsaw with the Warsaw of the novel and explores this ancient city for the remnants of the world depicted in the novel. Like most old cities the past is a veneer that lies on the surface of most things, but in the case of Warsaw much of this veneer is recreated because of the Nazi regimes determination to leave nothing of consequence standing. Though the war was lost, their armies on the verge of final defeat, they would do their best to destroy this city before they were finally forced to capitulate. As a result much of the Warsaw’s cultural history as reflected in its architecture had to be rebuilt. 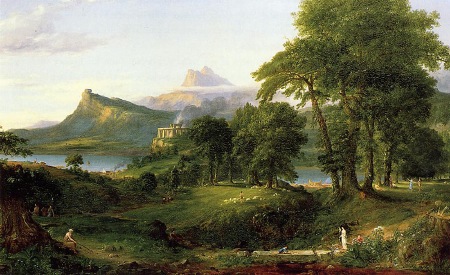 The Arcadian or Pastoral State, second painting in The Course of Empire

Often the literary journeys we take are in quest of the perfect place, it is a quest for a kind of Utopia where all is peaceful and to our liking. This is an impossible journey of course, because few of share a vision of the perfect place that is in exact conformity with the visions of others. Most of us would be the barbarians at the gates of our neighbors Utopia trying to bring it down and into conformity with another Utopic vision. That said, often when we read a description of a Utopic place our imaginations play with the details and these places become for us what their authors intended even if not in the way they intended.

Other journeys are to places we may not in fact want to visit, but enjoy observing from the safety of our imaginations. I remember reading Arthur Conan Doyle’s The Lost World. I did not want to visit this place or any place like it “in the flesh” so to speak, but enjoyed my life what life amongst the dinosaurs might have been like if there had in fact been human ancestors to live among them. When a story captures us we are in its space and if that space includes giants, or dragons, or magicians, or vampires we experience for a bit life in their presence. Perhaps all the literary dangers we encounter are mythic or metaphoric or in some other way archetypal and capture the deep and dark workings of our subconscious and bring us into contact with the deeper layers of our being. There was an article in the New York Times last week, “The Holy Grail of the Unconscious”, on the eminent publication of Carl Jung’s “Red Book” that documents, it is said, his journey into the depths of his own madness. This journey of Jung’s not only led him through his own experience with madness but shaped the direction his practice of psychology took.

This scene from the film version of Ray Bradbury’s novel The Martian Chronicles captures another aspect of our real and imagined journeys. The space travelers think they have arrived home, sort of. Everything they see suggests home, except that it is found on Mars. They are lulled into the world of their past and their yearnings. It is of course a trap that plays upon the spacemen’s desires and longings in order to remove them as a threat to Martian civilization. Perhaps there is a sense that our memories of home are seductive and dangerous. Home may represent safety and warmth and acceptance. But it can also be a place that insulates us from life and from pursuing our own unique destinies. Perhaps another office performed by our literary journeys is to wean us from home, to prepare us to go out on our own and face the world and shape it a bit to our own ambitions and desires.

13 thoughts on “Journeys to Imaginary Landscapes”