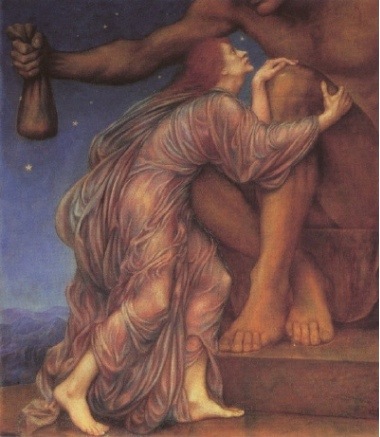 The song suggests that values, relationships, and other aspects of daily living are changed once money becomes involved. In the painting we see someone depicted as worshipping mammon. Mammon is not money but the term given to its influence. Money in and of itself is just a thing, it is not inherently good or evil, it is an individual’s attitude towards money that is good or evil. The miser is a recurring comic character. He is seen in Moliere’s play The Miser and in Ben Jonson’s play Volpone.

Ben Jonson imagined two audiences for his plays, one that got the jokes and laughed at them and one that not only got the jokes and laughed at them, but also reflected on the nature of the joke and what was being ridiculed. This second audience might recognize in themselves some of those values held up for ridicule and as a result might actually be improved as people. They would at least be a bit more self-aware. When it comes to money it is not unusual to recognize people who have been corrupted by it and to hold those people up to ridicule without realizing our own susceptibility to this weakness.

There was an economic advisor for a recent governor of my state of Massachusetts who justified paying those that worked for the government a lower wage than those doing similar work outside the government. He did not deny that the work these people did deserved the higher wage, he justified lowering the wage as a way of lowering taxes. If by paying a substandard wage the taxpayer could keep more of her or his money than it was all right to pay a substandard wage. I think this is worshipping mammon, it is allowing a relationship towards money to interfere with our sense of right and wrong.

St. Paul says the workman is worthy of his hire and to deny the workman his hire is wrong. What is especially unnerving about the actions of this state official is that he involved the whole state in this dubious attitude towards money. There may have been many other reasons he could have given to justify lowering the wage, but he chose this one and I think that is revealing. When money becomes involved honest people sometimes do things we do not normally associate with honest people. I understand that taxes are a troubling issue and that many believe they pay too much in taxes and that there is no easy answer to this problem. But I think we should be honest about what we are doing. If we do not want to pay the going rate for a service than give up the service, don’t deny those providing the service. That is the responsible thing, I think.

The painting above depicts a scene almost like that from A Christmas Carol when Scrooge with the Ghost of Christmas Yet to Come visits the scene and aftermath of his own death. In the painting the miser is dying, we see a gentleman that looks very like death personified coming in at the door. Others are scavenging through the miser’s belongings. The painting suggests that those around the miser share the miser’s attitude towards wealth and “portable property.”

Looking at the painting we may think the miser is getting what he deserves, he has hoarded his wealth and denied others their due (or at least because he is called a miser we might assume he denied others their due). But just because the man is dying does not entitle those around him to his belongings, any more than Scrooge’s housekeeper was entitled to Scrooge’s bed curtains. If we in looking at this painting justify the actions of those around the miser, perhaps we need to look to ourselves a bit, to follow Jonson’s advice and laugh at the joke but also reflect on our own behavior and attitudes. 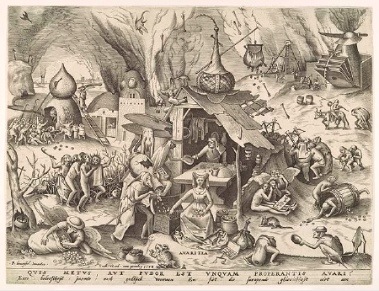 The engraving suggests a horrific quest for wealth and property. There are people scrounging up cash and goods while others are undergoing various forms of torture. Many of those collecting the merchandise are demonic in their appearance and many of those that do not look demonic are engaged in demonic behavior. The scene is one of great destruction and suggests that the infatuation with wealth spiritually ravages the individuals that yield to this infatuation while ravaging the physical landscape and those that live upon it in the process.

Avarice is one of the cardinal sins and was often during the Middle Ages and Renaissance depicted as it is in the paintings above. In stories by Chaucer and Boccaccio this attitude towards money is often given prominence. The story Chaucer has his Pardoner tell captures this attitude towards wealth and avarice quite well. The irony of the story is that the Pardoner that tells it does not believe in the moral of his tale, but sees the moral as a way of exploiting his hearers and of satisfying his own avarice.

I think that there is a satiric quality to the paintings as well as to the stories of Chaucer, Moliere, and Jonson. Satire ridicules the imperfections that are its objects. They often make us laugh because the satire reveals these imperfections for what they are and those that are the objects of the satire often end up looking very foolish. Jonathan Swift said of satire, “Satire is a sort of glass, wherein the beholders do generally discover everybody’s face but their own; which is the chief reason for that kind of reception it meets in the world and that so very few are offended with it.” This is essentially the point Jonson was making about his two audiences, though Swift seems less optimistic in that if there is a second audience like the one described by Jonson whose characters’ are reformed by the satire it is a very small audience.

These thoughts about money and how it is used and conserved were prompted by an article. “A Literary Legend Fights for a Local Library”, in The New York Times. It is about Ray Bradbury trying to help a local library on the verge of being closed. In the town where I teach the local library is struggling to survive. It had to discontinue its membership in a cooperative of local libraries that enabled it to make resources available to the community that the community itself could not afford. Many communities do this; it enables a library with limited funds to enlarge its collection of books, music, and films by joining its collection to that of other libraries in the area.

The same issue is raised with funding cuts to schools and services that help the most vulnerable in our communities. We tell ourselves we cannot afford to help others; we have too many problems of our own. In this economy there is some truth to that statement, but what happens to a people who in the name of conserving their own resources deny necessary resources to others. Perhaps it can be said that adults that are struggling bear some responsibility for those struggles, they made unwise choices, did not think ahead. But what of the children? When library budgets are cut, it is the children that are hurt the most, as is also true when school funding is cut.

The extra-curricular activities and after school programs that are often the first to go are often the programs and activities that get some students into school in the morning. I have many students whose grades decline as soon as the sports they play finish their seasons. If the sport were taken away many of these students would not pass their courses, some would stop coming to school. That is, of course, the student’s choice and we are not to blame if students make poor choices, or so some would say.

“Money Makes the World Go Around”
From Cabaret

Perhaps money does make the world go around, perhaps that is all that is truly important. In fairness money presents many difficulties. The film, Cabaret is set in Germany at a time of massive inflation during an international depression. The song could mock attitudes toward money, but at the same time there was a great need for money or for something that would keep food on the table and a roof over one’s head. Samuel Gompers, one of the leaders of the union movement in America said that businesses had a moral responsibility to earn a profit. Many people’s well being depended on the ability of companies to make a profit and pay a decent wage. When does a company in its quest to generate more profit cross the line and go from fulfilling a moral obligation to provide for its employees to worshipping at the feet of Mammon? 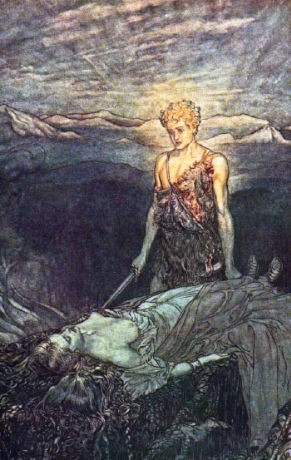 The story of Siegfried and Brunnhilde is a kind of “Sleeping Beauty” story. Brunnhilde has been put to sleep by her father Wotan because she disobeyed him and he has encircled her with a wall of flame. To be awakened from her sleep someone must find a way through this wall of flame at the top of a high mountain. Siegfried makes the climb and penetrates the fire and wins the love of Brunnhilde. Like in all “Sleeping Beauty” stories Brunnhilde is vulnerable and cannot save or protect herself.

Economic collapse makes us all feel vulnerable and many do not feel they can protect themselves. Stories, especially myths and fairy tales, often end happily. Siegfried climbs the mountain; Brunnhilde is delivered. But in life there often is no Siegfried, we feel we are on our own and have to think of ourselves first. There is truth to this that cannot be overlooked. Cormac McCarthy creates an every man for himself world in his novel The Road. But can any man long survive in an every man for himself world?

Scrooge is redeemed at the end of his story and uses his wealth more benevolently. Many of us would like to believe in this kind of world. Volpone and Mosca, on the other hand, and the others they took advantage of, get their just desserts in the end, but there is no “Christmas morning” experience. The fools are shown to be fools, the corrupt reap the rewards of their corruption, but others are left unfulfilled and not entirely happy though they have done nothing to deserve unhappiness. In the end, perhaps, we must choose between Volpone’s credo of “Good morning to the day and next my gold” or the more open handed one of the reformed Scrooge. Maybe it is enough to realize the choices we are being presented with and to make those choices honestly and in good faith.