On Learning and Other Games of Chance 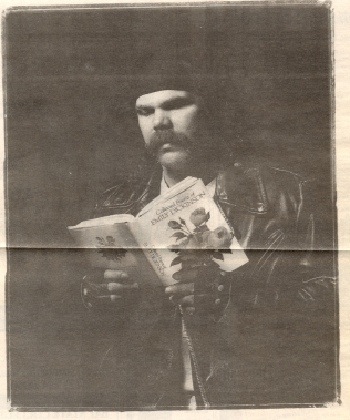 Ad in the Boston Globe to Promote Reading

The dulcimer when played by Richard Farina is such an exuberant instrument. Art of all sorts for me is characterized by exuberance. Whether it be the exuberance the gentleman in the photograph brings to his reading or the exuberance dancers on prom night bring to the dance art is always an intense enterprise that demands a great deal of energy from those that would enjoy and understand it. Some think exuberance must always be cheerful, but I think it must always be energetic and enthusiastic and energy and enthusiasm are not always cheerful. The gentleman reading his book is absorbed, he is investing a great deal of mental energy in what he is doing and because he is doing what he is doing of his own free will there is, I like to believe, a great deal of enthusiasm involved in the process as well. An old philosopher said that art delights and instructs. This is probably true. But art also stimulates the mind and the emotions in ways that are not always instructive and perhaps not always delightful. The end of Twelfth Night, for example, is delightful, but I am not so certain that delight is what I feel at the end of King Lear or if it is, it is a very melancholy species of delight.

There is an autistic student I talk to with some regularity and she often asks me if there are any versions of Hamlet, or other tragedies, that have happy endings. I tell her that for Hamlet the ending is far from happy but for Elsinore and the state of Denmark things have been set right and for them the ending is happy and this is part of the point of tragedy. In the end good people suffer harm, but also a community has been redeemed and order has been restored. Scotland can be a just nation once again, Salem can recapture a truer righteousness. So in this sense all tragedy ends happily and perhaps it is here that the delight lives, though, it remains a delight wanting cheerfulness. 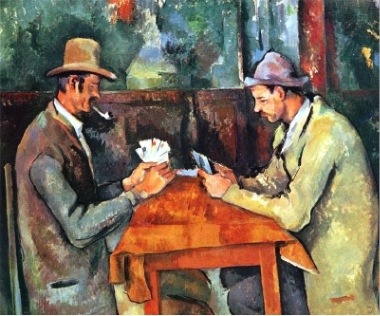 There was an article in last weeks New York Times on taking chances. The article was actually an interview of sorts with the writer Leonard Mlodinow. It was called “What Are the Odds” and it was about speculating on the future. His basic point was that the farther we get from the present the less clear and the harder to predict the future becomes. This seems in some ways to be self-evident, but I wonder if we live our lives this way. We look at the present moment and make decisions about what will be important in the future. Some things we say are irrelevant and others we say are very relevant. But who can know the twists and turns the future will take. Mark Twain invested in a printing press that failed miserably because he did not believe anyone beside himself and his lawyer perhaps would buy a telephone.

The article suggests that what is important is preparation and gives examples of people with mediocre abilities who did extraordinary things because they were ready when opportunity presented itself. But what I found to be the most meaningful part of the article came at the end. He talks about learning to be comfortable with failure. He quotes Thomas Watson, the founder of I. B. M. “If you want to succeed, double your failure rate.” In our schools it seems that our preoccupation with grades discourages this. Failure is not seen as the first step on the road to success but the end of all hope. I believe that if I am not failing at things that I am not challenging myself, I am pursuing only those things I know I have the skills to accomplish. But to grow at anything I must attempt things that are beyond my grasp. And this means I must willingly flirt with failure and that as a teacher I must encourage my students to do likewise.

Students often do not like the books I teach in my classes. They do not believe they are relevant, but they say this without really having read the books. The problem often is that they are difficult and that students do not wish to wrestle with something so difficult. This may be because they have no interest in books or the stories of those books that I teach, or that they see no value in developing the skills that would enable them to understand these books. Who’s to say they are wrong? I think these books have given comfort, joy, and wisdom to many people over many centuries and that they can continue to give comfort, joy, and wisdom. A book that has spoken to people over centuries has already demonstrated an ability to speak to times very different from those that gave it birth. This would suggest that it speaks to something that is not constrained by time but adapts with some ease to changing circumstances. 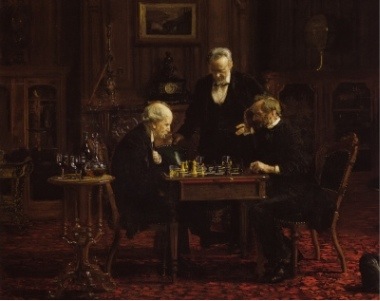 Perhaps education is less a game of chance and more a game of chess, a game in which luck plays a part but is not entirely a roll of the dice, there is skill and preparation involved as well. Chess is a game that, like many of the books we read in school, has survived many centuries, and if Star Trek is to be believed, will survive many more. It is a game that requires the beginning player to enjoy a bit of failure while learning to master the board. It often rewards thought and careful planning, but just as often it does not. In fact a good player must be able at each stage of the game to adapt and rework whatever plan or strategy guided the game’s beginning. As the paintings above and below suggest, the game can be played by anyone, anywhere, any time; by the rich and by the poor, in a great house or in a public house, by sunlight or by moonlight. 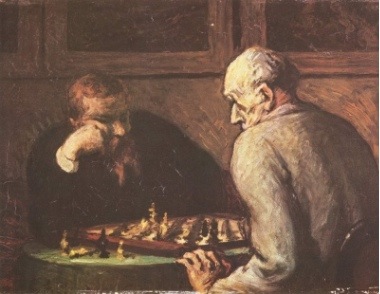 This is also true of the development of the mind. All the money in the world cannot buy intelligence, though it can help those with modest intelligence develop their limited abilities to a far greater extent than those with greater intellectual gifts but fewer financial resources. It is important to wrestle with difficult things, whether it is becoming an accomplished chess player, an accomplished athlete, or an accomplished thinker. We wrestle with a difficult book for the same reason we wrestle with a difficult chess problem or a difficult equation, the wrestling grows the mind and the imagination, it reveals to us our capabilities. It is at the edge of failure that we truly learn our abilities and our limitations. The teacher must set the example. How do we teach students to test their limits if we will not find ways to reward failure? How can we understand what we are asking our students to do if we are unwilling to risk failure in our own practice?

The song is about a man and a woman, one French and one Flemish. The French and the Flemish, at least at the time the song was written, did not get along. The love pursued by the two people in the song has to overcome cultural prejudices. This prejudice may not rise to the level of the Capulet’s and the Montague’s but it may feel that way to those involved. Love is one of those things that defies reason. It demands a long term commitment from people who often have not thought much or at all about the future and the nature of the commitment they are making. This is true not just of the love a person has for another person but it is also true of the love a person has for ideas, principles, and occupations. We choose our careers, for example, before we fully understand what it will be like to pursue those careers on a daily basis over many years. We embrace a faith before we fully understand how the pressures of daily living will challenge that faith and sow seeds of doubt.

As an educator I must care about those who care very little for that which nurtures me and is the focus of my work. And there is little comfort looking backwards. In the 16th century Robert Burton wrote of schoolteachers, “For what course shall he take (the learned man), being now capable and ready? The most parable and easy, and about which many are employed, is to teach a school, turn lecturer or curate, and for that he shall have falconer’s wages, ten pounds per annum, and his diet, or some small stipend, so long as he can please his patron or the parish; if they approve him not (for usually they do but a year or two), as inconstant as they that cried “Hosanna” one day and “Crucify him” the other; serving-man like, he must go look a new master; if they do what is his reward? At last thy snow-white age in suburb schools / Shall toil in teaching boys their grammar rules.” Things have improved, I suppose, tenure means a bit more job security, though there are those that would seek to take tenure away. But at the end of the day there is the belief, against all odds, that most will learn, and that some will find a similar vocation, or if not a vocation, will find a similar ardor for a beautiful thing and a the subtleties of language.

According to the article the one aspect of success that is under our control is the number of chances we take. I think that many things that we think of as being difficult are only unfamiliar. That means the more chances we take the sooner the unfamiliar will become familiar and with familiarity comes a degree of success. For a teacher last year’s success will not always guarantee success in the new year. Like the chess player the strategy and the plan must adapt to a different combination of moves and counter moves. Every year is new and unfamiliar. Each year must find its own road from failure to success or something resembling success. This process is difficult and it can be disheartening. But as Tom Hanks said in a movie about young women playing baseball “there is no crying in baseball” and “if it was easy, everyone would do it.” The classroom is an exuberant place and it is a thing of beauty.

7 thoughts on “On Learning and Other Games of Chance”