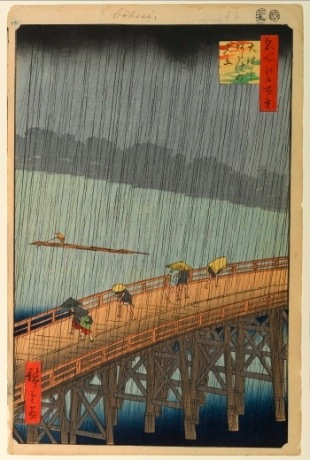 The song is actually two songs spliced together, or more precisely two recordings of the same song, one recording done in English and the other done in German. The singer in both recordings is the same, Marlene Dietrich. The records were made during World War II. The English version of the song was among the most popular songs of the war for the English and American soldiers. The German version was one of the most popular songs of the war for the German soldiers. I think it interesting that folks that spent their days shooting at each other went home (or at least to their barracks) and enjoyed the same music. There was this song that united them while the work they were doing kept them apart.

The image is of a woodblock print done by the Japanese artist Hiroshige. It is of a bridge in the rain. I think it captures very well the sensation of being caught in the rain. The woodblocks of Hiroshige made an impression on the French Post-Impressionist painter Van Gogh and he imitated the Hiroshige’s style and on at least two occasions copied the images themselves, though he painted them in oils. What is in the art of a Japanese print maker that resonates with a French painter? Both the song and the pictures illustrate that whatever else separates us, art has the ability to draw people together who are in many, maybe most, ways very different. 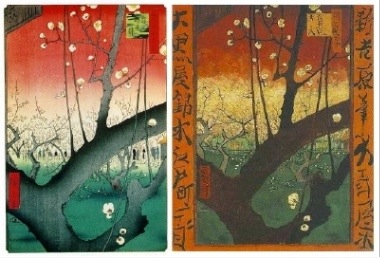 There may be other aspects of the culture that keep people hopelessly divided, their religion, their form of government, but the songs they sing, the pictures they make, and the books they write often touch people who in just about every other way are in conflict. They even, at times, help shape the cultural directions that their dissimilar neighbors take. This does not mean that art has the ability to bring peace to cultures in conflict, after all the soldiers that were united by a song at night still shot each other the next day. But it does help to illustrate that there are aspects of the human character and imagination that are attracted to certain things no matter the cultural and physical geography. 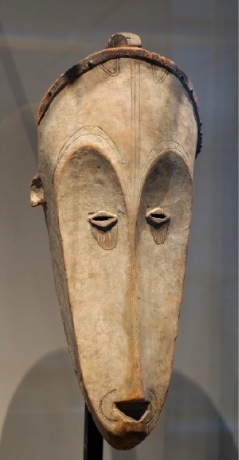 Pablo Picasso saw an African mask that looked something like this. This mask had a religious and ceremonial use. It was not made to be a work of art in the way a painting is, but perhaps there is something in the way our psychology works that drives us to make our tools not just useful, but beautiful. The mask has a serenity and a sternness to it and its lines are very graceful. I think the serene sternness goes well with its function, that of an inquisitor. He is certain in his own beliefs and that certainty instills in him a serenity that he brings to the work that he does. And because that work involves the defense of that belief that gives him his serenity he is quite stern in his confrontation of that threat. This is often what the artist captures the conflicts and incongruity in the human character. 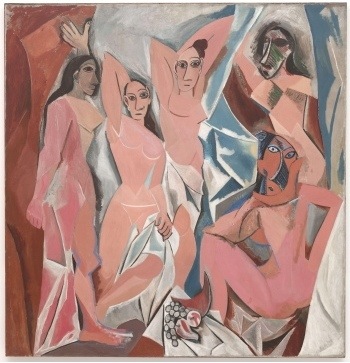 If you look into the faces of the two young ladies on the right you will see the influence of the African mask on Picasso’s painting. The young ladies in the painting seem to be looking at the observer of the painting with various attitudes. The attitudes of the ladies with the mask-like faces are especially disturbing. The borrowing of the motif of the mask helps Picasso to say something about these young ladies and their aloofness. Perhaps the masks capture not so much how the ladies look as how they make the painter feel. The lines of the mask also suggest the Cubism that was a feature of Picasso art during one of his many periods. I think there is also an irony here because this African cultural imprint on the French culture was the result of a colonial enterprise that plundered much of Africa.

The film was adapted from one of Rudyard Kipling’s best novels, Kim. It is about a young boy who has been orphaned in India. He lives on the streets and survives by his wits. It presents “The Raj”, or the British occupation of India, in a favorable light, suggesting things about this occupation that were not true. It is an outsiders view of a culture that assess that culture on the occupiers terms. The indigenous people are a little childish and the occupiers are benign and paternal. Though the book and the film capture the local color and the look of the landscape they both fail to capture the life of the culture. The India of Kim is that of fairy tale and not of reality.

The book, though, did provoke interest in this culture in the minds of many of the book’s readers who as a result went to this land to learn something about it. Many found the real India and not the fairy tale. They discovered the actual culture and not the veneer an occupying force laid over that culture. When I was in graduate school I took a course in the Victorian novel. The instructor seemed to think that the British Empire left behind in the many nations that it controlled when it was at its strongest a civil service and structure of government that served these nations well and enabled them to establish successful governments. I am not sure this is true but it is part of the cultural exchange. As a result of British interests in this part of the world the literature and religion of India and Asia came to play a significant role in shaping the thought of writers like Emerson and Thoreau. This too is part of the cultural exchange.

A review in this weekend’s Guardian concerns a book about the British Midlands. The article is “Land of hope, glory, and shall I be mother?” and it was written by Euan Ferguson about Stuart Maconie’s book Adventures on the High Teas. According to the review the book attempts to find the real Midlands of England as opposed to the Midlands of popular fiction. What this suggests is that even when we are at home we do not always understand correctly our own culture. Which is the true Los Angeles, that of Raymond Chandler or of The Beach Boys. What is the true Boston, that of Henry James, Robert Parker, or Mayor Menino? Does the culture of any place have a single face? Does the cultural mask that any place assumes resemble the place where its people actually live? Perhaps at some level our culture is an assumed identity.

The Remains of the Day
Columbia Pictures

Kazuo Ishiguro, a Japanese writer, wrote the novel on which this film was based. It is a depiction of life in a British manor house. The manor belongs to an aristocrat who has grown dangerously close to the Nazi Party. His aspirations are good, in that he hopes to prevent a war. But his is the avenue of appeasement that would overlook the more troubling side of the German leadership of the time. What is interesting, though, is that Ishiguro is not English and that the observations are those of an outsider looking in. In some ways Ishiguro is looking at Britain in the same way Kipling looked at India, but are the portrayals of English culture as condescending as Kipling’s were of Indian culture.

The character of Miss Kenton is just, while that of Mr. Stevens is domineering and condescending to those that he leads as the chief butler. I do not think the characters are intended to be viewed allegorically but Mr. Stevens’ attitudes are very like the attitudes the British brought to the lands they occupied. Ms. Kenton on the other hand tries to accept everyone and look out for those that cannot protect themselves. This is where most of the conflict between these two servants dwells. Things do not end happily for either, but that is another story. What is it in these characters and this European culture that an Asian writer finds so intriguing?

I think one of the reasons we study art and literature is to try to understand what those outside a culture find attractive about that culture. For all the problems that nations have they all leave a record of their aspirations and their idea of beauty in the art they leave behind. It is this art that we study and to a large degree most remember about what has come before. The Elizabethan Age and the Victorian Age left behind great works of art and literature. We know the names of the monarchs that have given their names to these historical moments, but most do not know much of the monarchs themselves. 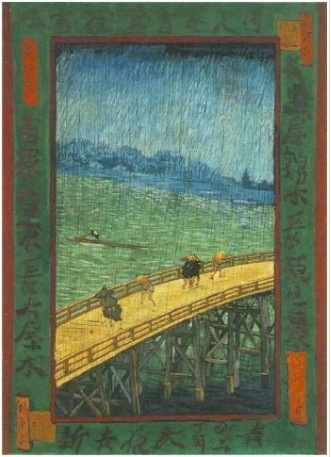 If there were no Shakespeare would the name of Elizabeth or if there were no Dickens would the name of Victoria be so widely known? How much of the romance of India and the east are due to the misrepresentations of Kipling and others like him? One reason to study culture is to separate out the myths that have been passed down about those cultures that are different from our own and to preserve the most admirable aspects of our own culture. The culture that we build and the materials that we use to build that culture will have more to do with how we are remembered than will any of those we serve as we go about our daily business. A nation that does not know its culture probably does not know itself very well.

11 thoughts on “Wearing a Cultural Face”