Pack Up Your Sorrows
Richard and Mimi Farinia

The Faces of Culture – Are There Only Two 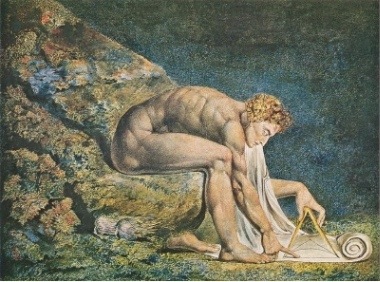 In the 1950’s C. P. Snow wrote an influential essay called The Two Cultures. He referred to the two cultures that dominated the universities of his day and to a significant extent still to this day. The two cultures are the Humanities and the Sciences, or perhaps as they are more popularly known the “arts and sciences.” Snow’s argument centered on which of the two cultures would be most able to practically address the issue of human suffering or, as the song suggests, if you could pack up your sorrows which, the Humanities or the Sciences, is best equipped to take them from you and, perhaps, put them to some good use. But even if no use is found, they are no longer your troubles.

William Blake’s painting of Isaac Newton is an apt representation of that struggle. Blake was one of the more obscure poets; he has kept people pulling their hair out trying to understand his poems since the day the poems were written. Newton, the subject of the painting, was the quintessential scientist mathematician, who, it is said, would wile away his leisure hours computing logarithms in his head. These lines from his poem Milton also suggest a role played by the arts and sciences in the arena of human suffering.

And did those feet in ancient times,
Walk upon England’s mountain green:
And was the holy Lamb of God,
On England’s pastures seen!

And did the Countenance Divine,
Shine upon our clouded hills?
And was Jerusalem builded here,
Among these dark Satanic Mills?

I will not cease my Mental Fight,
Nor shall my Sword sleep in my hand:
Till we have built Jerusalem,
In England’s green & pleasant Land.

The poem attacks the misery caused by the Industrial Revolution. Though it is true that the scientists and engineers that created the machinery of the Industrial Revolution are not responsible for how that machinery was used do they bear any culpability at all for the anguish their machines caused? Should they have known enough of human nature to know what would follow? Is this a fair question; is progress inevitable and human nature being what it is will progress always produce a bit of suffering?

An article in this weekend’s New York Times Review of Books raised this issue of Snow’s essay and its continuing influence a half decade later. The article is by Peter Dizikes and is titled “Our Two Cultures.” Snow was concerned that because most of the free world’s politicians came from some branch of the humanities, law mostly, the sciences were getting short shrift. Snow believed that it was the sciences that were best suited to eliminating poverty improving living conditions in the impoverished corners of the globe. The undeveloped world needed technology and the sciences, which includes math, is the best suited to solve this problem.

Therefore the political class of the free world should give the sciences more resources and set to work addressing this problem. As this was the 1950’s and the heart of the Cold War Snow suggested that if the free world did not give their scientists the resources to solve this problem the Soviets would and Communist sphere of influence would grow while the Free World’s sphere of influences would diminish.

There is truth to the argument; those nations of the world that are struggling economically would probably struggle less if they had a vibrant industrial base. But is this all there is to being human and will this alone take away the sorrows of the poor? It is probably true that failing to solve the problems of economic inequities between nations will result in many poor people staying poor and miserable. But will the eradication of these economic disparities by itself reduce human misery? Will the world’s sorrows have been successfully packaged and shipped off to those that “can use them” 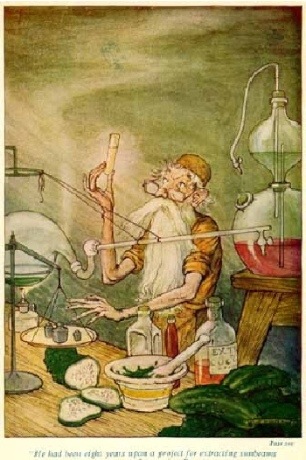 At the heart of Snow’s argument is a belief that scientists are somehow more moral than those in the Humanities. Being a novelist and a scientist he lived in both worlds and ought to know. He could point to writers like Ezra Pound who became mixed up with the dubious morality of the Fascists to lend support to his argument. But then I suppose others could point to scientists like Werner Von Braun who were plucked from the Nazi’s atomic energy program as evidence that scientists sometimes made poor moral choices as well. The illustration depicts a scene from Jonathan Swift’s Gulliver’s Travels. It is a scene from the third voyage and depicts the Academy of Lagado. In this part of the story Swift is mocking the scientists of his day (Isaac Newton among them) for what he believes are the poor, impractical choices they made, in his view anyway.

The scientists in Swift’s satire seem most in the service of their egos. None of their experiments are practical and have been designed by Swift to feed the ridicule he has aimed at science. Though in the experiment depicted in the illustration suggests why this is considered by many to be the weakest part of the satire. Swift believed scientists were pursing science for science sake (to corrupt the popular phrase) and that the experiments served no purpose and were the result of totally abstract speculation. There are two things the critics of this voyage think Swift missed. One is that many useful products are by products of abstract science. The second is that what may have appeared to be totally abstract and useless in the experimental stage may when the tests are done produce something very practical. As, for example, if you replaced the cucumbers with corn you might see the beginning of ethanol and other bio-fuels. 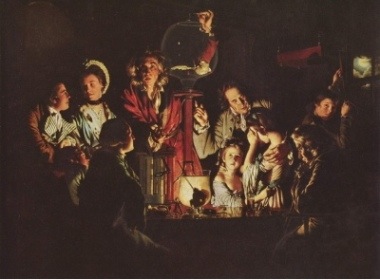 An Experiment on a Bird in an Air Pump

This painting illustrates what is the most common attack on the ethics of scientists, their treatment of animals. The contraption in the painting will kill the bird in the glass at the top. I do not know the purpose of the experiment or what it was meant to demonstrate but it reveals a somewhat cavalier attitude towards wildlife. Of course, these are not scientists depicted in the painting but ladies and gentlemen playing with an eighteenth century version of the chemistry set.

Scientists that do experiments on animals will say that the purpose is to make discoveries that will benefit the human race and because human life is more important than other kinds of life the experiments are seen to have value. Most humans accept this as a valid argument but most are at the same time opposed to experiments that seem arbitrary and cruel in their use of animal subjects. At the end of the day, though, scientists through these experiments have produced what has improved the quality and the length of life for most that can read this. Still, that there are experiments done on animals that are cruel and inhumane suggests that at times scientists too struggle with ethical choices and do not always choose correctly.

The video illustrates what is the current bane of technology, or perhaps its current boon. At the time this program was broadcast in the 1980’s television was the object of much criticism, as it still is to this day. But the clip is titled “Electronic Fragments” and when viewed today suggests an argument that could be aimed at many other forms of electronic media. Television, iPods, cell phones, DVDs, CDs, and whatever else is to come are the products of modern science and technology and have been marketed quite successfully to entertain us all. Is it fair to criticize the scientists for the uses made of their inventions? Nuclear weapons, for example, were designed and developed by those who are products of the science culture. Those that build and use these weapons have, for the most part, come out of the humanities culture. Are the scientists morally responsible for the way their discoveries and inventions are used?

Or is there a third culture, popular culture perhaps, that exerts its own pressures on both those that come out of the science culture and out of the humanities culture. If the people prefer iPods, for example, to clean, renewable fuels which of these technologies are going to receive funding. If the popular culture wants to keep taxes low, which technologies are going to receive funding from the government? Of course there is more to the science culture than just those engineers that work in the technology industry. And there is more to the humanities culture than those that go into politics. There are those in both cultures that raise objections to what those within their perspective communities do with their talents, resources, and power.

At the end of the day both cultures are, I think, Important. They both help us to understand ourselves and our place in the world. They also help us to think and to reflect about more than just the surface of things. When does self-preservation become self-interest and selfishness? On the surface they look much alike. We need to become a more thoughtful and reflective people in order to recognize when we have taken self-preservation too far. The humanities can help us to become a more reflective people. Many of the world’s most serious problems, disease, hunger, and poverty can be eased if scientists are given the tools and resources to address them. The problem isn’t so much about which culture is the most moral as much as it is about what each culture reveals to us about our responsibilities to the world in which we live and to those that live among us.

6 thoughts on “The Faces of Culture – Are There Only Two”