Putting Down Roots and Pulling Them Up Again

John Stewart is probably best known as one of the Kingston Trio. He was not an original member but filled in when one of the founding members left. He grew up in California. His father worked at one of the Orange County race tracks and one of his songs celebrates the Los Angeles County Fair in Pomona. In this song he acknowledges his California roots and how he cannot imagine himself as anything but a Californian. I think it interesting that he finds his roots in one of the most rootless states in the union.

My two sisters were born in California and one stayed and one moved east, to Nevada. My brother, like me, was born in Schenectady, New York, but he was not even a year old when we moved to California. I was four. Though I lived in California until I was able to move east, to Massachusetts, in the 1990’s when I was in my forties, I never thought of it as home, I always identified with the East Coast and the changing seasons. The image above contains images of Los Angeles I know very well and I have pleasant memories of them, but though it was home for a long time I never felt my “roots” were there.

My father used to take us camping weekends to those mountains behind the L. A. skyline at least once a month when the snow was not around. Somewhere in those snowy mountains there is a little town called Wrightwood and a campground on the banks of Jackson Lake in an area of the Los Padres National Forest called Big Pines, where we used to camp. We did not have sleeping bags only heavy canvas blankets that we used to throw over us as we slept on the ground. It was great fun.

Many great stories revolve around home and our relationship with home and our roots. My juniors are reading Ethan Frome about a man who has never felt home at home. They will be reading next The Grapes of Wrath about a family that is quite attached to their home but circumstances force them to leave home. Grandpa Joad was one of the pioneers that first settled the Oklahoma land that he has farmed for many years. Larry McMurtry tells a similar story in his memoir Reading Walter Benjamin at the Dairy Queen of his grandfather moving west to settle an undeveloped land and watched it develop and become settled. Pulling up roots to set them down someplace else makes a good story whether, like the Joads, the move is undesired or, like the McMurtrys, it fulfills an aspiration.

This is a Los Angeles street when the west was wild. The gold rush has passed but California and Los Angeles was still a desired destination. Wallace Stegner wrote a marvelous novel Angle of Repose about an old college professor trying to reconstruct the story oh his grandparents’ life. His grandfather was an engineer who had aspirations to settle in the west and use his skills to extract the earth’s riches. He is taken advantage of much of the time but he is ultimately successful as he pursued his engineering career throughout the Western United States and Mexico, settling finally in California, where the family sets down its roots. His grandmother was from the East Coast and moved in sophisticated circles that included Henry James. They were a very different pair but at the same time, the kind of people that settled the west and rebuilt it in their image, an image with roots in Europe.

Perhaps this is what rootlessness produces, a land that comes to resemble the land that was left behind. I enjoy western novels, both those that aspire to be literary art, like those of Wallace Stegner, and those that preserve the romance of the west and whose fiction is a bit pulpy, like those of Zane Grey and Owen Wister. The western, if one can forget for a moment the harm that was done to the people to whom the land originally belonged, is about restlessness and the quest for new horizons and new adventures. The western is often about courage and an ethic that in many ways resembles that of chivalry and the order of knighthood in the medieval romances of Europe. I think this is also a part of the American character, or at least it used to be; a desire to push limits, explore the unknown, and to remake the world. 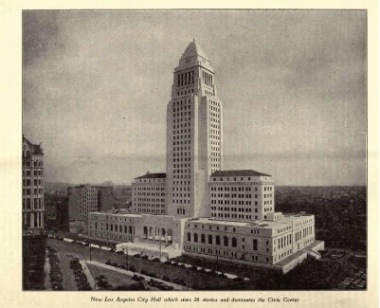 About seventy years after the earlier photograph was taken Los Angeles looked more like this, like a major city with a City Hall and paved streets. In the voyages of discovery a place was claimed by the “mother country” with the posting of a flag and the recitation of a few words but the place actually became the “mother country” when it began to resemble this national parent. The stories of Sinbad and Odysseus revolve around men on a journey. Each has many adventures but each wants ultimately to get home, not to a place that has been made to resemble home but to the home they remember. Aeneas is also a man on a journey with no home to go to and the desire to find a corner of the world in which he can make a home. That home became Rome. Aeneas will put down roots that centuries later others will attempt to pull up and replant someplace else.

Growing up in Los Angeles about twenty-five years farther down the road the city did not look that different from the last photograph. There was a trolley system that knit the downtown together. As time passed that trolley system was replaced by a freeway system that threw the city boundaries out many miles in all directions. My brother and two sisters embraced the sunshine and picnics on the beach in mid-January. I longed for snow and a sled.

This scene from the movie The Endless Summer takes place in South Africa but the quest for the perfect wave was what motivated my brother and many of my friends. I never learned to balance myself on a surfboard, though I could do pretty well on a skateboard. This is the California of Venice Beach, in the montage at the beginning, and The Beach Boys. It was an important part of the California culture in which I grew up. It is the sun and the surf that allegedly draws people to California. I like the ice and the snow. What are roots, what motivates people to set them down one place instead of another? What is the future of roots?

As the world changes the corners of the world are being pulled together. It is now possible for a teacher in Massachusetts to teach students in Ohio, Georgia, and California; Brazil, China, and Arabia. How does this change the classroom and more importantly how does this change the students in that classroom? In some ways it seems that we are beginning to set down roots into a more digital soil, that we are less dependent on a physical place. Our friends do not have to live in our neighborhood or even our state. We no longer have to report at a certain time to a cubicle in a certain place to do our jobs. Perhaps this last is an exaggeration, the world of work is largely unchanged for most, but it is changing and for some it is no longer necessary to “commute to the office” to do their work.

I think we continue to give our loyalty to a nation but we are less bound by the borders of that nation. China, for example, has managed to get Google modified for its citizens so that they do not have the access that citizens of other countries have to news and the lifestyles of the world. But how long will this be possible? What happens when a government can no longer control our digital travel? How will this change the world and our corner of it?

The L. A. Times this week advertised a couple of talks on the city as it was presented in the literature of the past, particularly the books of Raymond Chandler and how it is presented today in the works of contemporary authors. How will this discussion be different twenty years hence? As more and more of us spend more and more time living not on the city sidewalks or the neighborhood hangouts but on a digital cable car that can take us almost anywhere how will our view of “roots” and “place” change? How will this affect our loyalties and our sense of community spirit? What will our “communities” look like?

Public schools are struggling with technology. I was this week invited by my principal to join a teacher discussion group sponsored by one of the districts technology people. The discussion is being hosted on Facebook. The irony of this is that our school blocks Facebook so that no teacher can participate in this discussion during school hours, even though the school is promoting the discussion. On the one hand schools can see the potential that the new technology offers for the future of education but they cannot, on the other hand, get past the problems the technology will bring along with it.

I think the potential gains make the potential risks worthwhile, if only because the students will be using this technology whether the schools use it or not. There are many tools we entrust to our students that are potentially dangerous, automobiles, dissecting knives, and laboratories. Generally students are safer using tools that have potential dangers if they have been taught how to use them properly. But the advantages go beyond this. The schoolroom as it exists today is constrained by geography; it rests on a plot of ground within the village or town that supports it. The technology enables students to study in a world that is larger than their hometown. 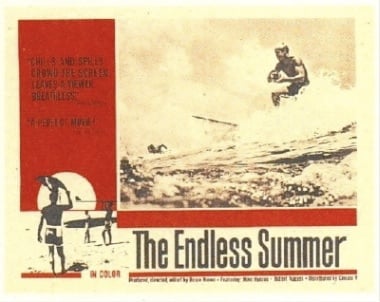 Poster for the Film The Endless Summer
http://en.wikipedia.org/wiki/File:The_Endless_Summer.JPG

Family will always have a claim to some of the roots we put down, which in turn will always tie us to a physical place. But our roots can go deeper and farther and for many this is already happening. I never learned to surf because I could not keep my balance on the surfboard. Perhaps the surfboard has changed a bit, and balance is achieved using different skills and the perfect wave is no longer found at the beach.

17 thoughts on “Putting Down Roots and Pulling Them Up Again”