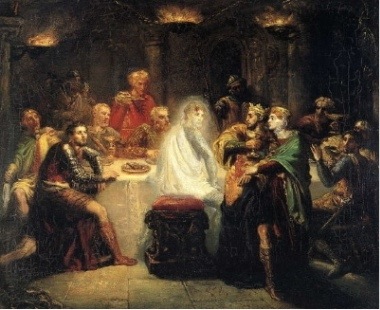 My juniors are reading the Henry James story The Turn of the Screw. The music is from an opera by Benjamin Britten based on the novella. One of the things I enjoy about this book is how it plays against the conventions of the traditional ghost story. The first two sightings of the ghost of Peter Quint take place in the daytime, the first sighting on a sunny summer afternoon. The music has a melancholy flavor to it throughout but the opening section suggests sunshine and sultry summer weather, perhaps in part because it evokes, for me anyway, the “Morning” section of Edvard Grieg’s Peter Gynt Suite, which in turn suggests sunshine. As the music progresses it becomes more tense and takes a turn to the mysterious and ghostly.

I have always enjoyed ghost stories. I think from the popularity of ghosts in literature that I am not alone in this. The picture at the top is of the ghost of Banquo haunting Macbeth after Macbeth has orchestrated Banquo’s murder. From the dialog in the scene we know that the ghost is only visible to Macbeth and that the strange behavior the ghost evokes begins to cast suspicion upon Macbeth and the manner in which he ascended to the throne. Ghosts often serve that purpose. Ghosts make regular appearances in Shakespeare and attest to their popularity in Elizabethan culture. 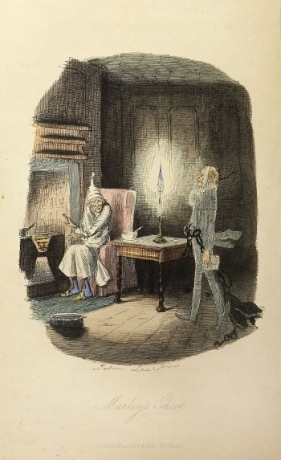 Marley’s ghost is probably the most famous of literary ghosts, at least in the English speaking world. He appears at the beginning of Dickens’ A Christmas Carol and gets the book’s festivities underway. He and the ghost of Christmas Yet to Come are the only ghosts that frighten anyone, the others are much more gracious and friendly. Dickens’ tale also underscores another aspect of the ghost story, the tradition of telling a ghost story at Christmas time. James’ story also begins with a Christmas gathering that culminates with the telling of ghost stories.

Robertson Davies wrote a collection of Christmas ghost stories called High Spirits. They were selected from comic tales he told each Christmas to colleagues at the University where he worked and many of the ghosts were familiar characters to the faculty. The stories in this collection suggest P. G. Wodehouse more than Edgar Allen Poe or the traditional view of the genre as one devoted to terror. In an interview with Terrence M. Greene shortly after the book was published, “Beyond the Visible World” (pp 220-223 of the web page if you get lost) Davies talks about ghost stories and the role of ghosts in literature and their associations with evil. He thinks many tellers of ghost stories try too hard to scare the reader and as a result write stories that are not that effective. But those storytellers that use ghosts well, like Shakespeare and Henry James, evoke the essence of evil and it is the presence of evil in the story that is frightening.

Those that have read the Harry Potter books, or Davies collection, realize that there is nothing inherently frightening in a ghost and that they do not have to be evil incarnate to capture a reader’s interest. I think Dickens’ ghost suggest that even when they terrify they can be in the service of virtue and the good. But where they represent evil they are terrifying. In the case of Macbeth the ghost reflect Macbeth’s own actions and start him on his road to a tragic end. It is less clear where the evil lives in the story by James, but there is certainly a malevolent presence in the story. 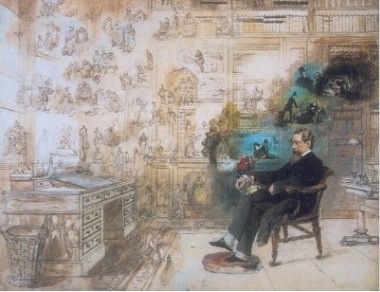 This painting suggests the ways an author might be haunted by her or his own creations. In the painting Dickens appears to be haunted by the characters he has created, they seem to live not just in his imagination but inhabit the room in which he worked. This suggests there is more to being haunted than being visited by ghosts. Some may be haunted by memories of past actions, and as the painting suggest, those actions need not be acts that shame us. Dickens is surrounded by the “spirits” of his success. But there is something potentially dangerous in this kind of haunting in that it can result in a satisfaction with the past that interferes with the future and produces stagnation.

The more troubling hauntings, though, are those of past failures or moral lapses that haunt a person and do a bit of damage to the psyche. Some of this damage may be deserved and even necessary if one is to go on to enjoy a happy existence. There are things in all of our lives, I suppose, that must be expiated. There is a poem by William Butler Yeats that captures the essence of this kind of haunting. It addresses the way those involved in the Easter 1916 insurrection at Dublin’s General Post Office were treated after the insurrection was put down. The poem is titled ” The Ghost Of Roger Casement”. Roger Casement was involved in the rebellion and was executed by the British. This execution and others like it that were carried out too quickly many believe by the British and it came back to haunt them later.

“The Ghost Of Roger Casement”
O what has made that sudden noise?
What on the threshold stands?
It never crossed the sea because
John Bull and the sea are friends;
But this is not the old sea
Nor this the old seashore.
What gave that roar of mockery,
That roar in the sea’s roar?

John Bull has stood for Parliament,
A dog must have his day,
The country thinks no end of him,
For he knows how to say,
At a beanfeast or a banquet,
That all must hang their trust
Upon the British Empire,
Upon the Church of Christ.

John Bull has gone to India
And all must pay him heed,
For histories are there to prove
That none of another breed
Has had a like inheritance,
Or sucked such milk as he,
And there’s no luck about a house
If it lack honesty.

I poked about a village church
And found his family tomb
And copied out what I could read
In that religious gloom;
Found many a famous man there;
But fame and virtue rot.
Draw round, beloved and bitter men,
Draw round and raise a shout;

John Bull is the British version of Uncle Sam; he is the persona of the British Empire. In the poem wherever he goes Roger Casement haunts him, not literally the ghost of the man but the story of the man’s treatment. It follows John Bull and affects the way he is received when he travels abroad. This haunting reminds us that actions have consequences and that we need to learn to think before we act. I think ghosts are often educational and sent to us, like Marley’s ghost, to aid in our reform.

Perhaps there is nothing more humiliating for a ghost than the inability to scare people. That is one problem the ghost in the film has. The ghost in this story, like many literary ghosts, desires only to be set free, that is, to be able to go to his rest and be relieved from the tedious and tiring work of haunting folks. Marley would like to go to his rest; the ghosts of Christmas Past and Present both go to their rest. The Ghost of Christmas Future, though, is different. He like Marley’s ghost is frightening and he like Marley’s ghost has no rest to go to. Past is past and the present becomes past, but the future always lies ahead and it is in the future that those things we have done that trouble us come to haunt our existence. Perhaps for the religious the rite of confession can put these ghosts to rest, but for the more secular other avenues need to be found.

In James’ story the ghosts might, as is Banquo’s ghost, be a figment of the governess’s imagination. They may not be real. Their presence enables the governess to excel at a job, if only in her own mind. But the consequences of her personal haunting have an evil stamp to them even if the governess herself is not evil. If the ghosts are not real her actions are criminal. The criminal acts the product of a troubled mind. But how do we counter an evil that lives inside us that we do not recognize and that goads us, as in the case of the governess, to actions that in their intent are good and virtuous. That is perhaps the most gruesome aspect of this particular haunting; that the ghosts in their defeat triumph. Perhaps the real terror is the undisciplined mind that is unaware of its limitations.