O, For a Muse of Fire, a Few Fernels, and a Follow Spot 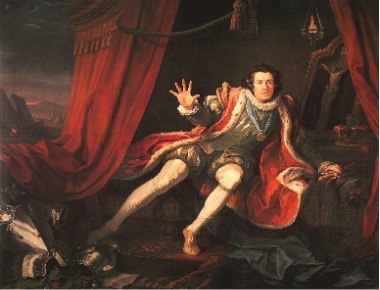 (“David Garrick as the title character in Shakespeare’s ”Richard III””

It is always dangerous to attempt to put your daughters, or your sons for that matter, on the stage. It is a very risky business with the odds of success (and by success I only mean being able to earn a living without the aid of a taxi cab) significantly stacked against you. As in gambling, the odds favor the house, the house in this case being the folks that collect the ticket receipts and even they have a hard go of it.

But nonetheless there is something alluring about the theater. What is produced is called a play and is staged in playhouse. This speaks volumes about the nature of the work. A good actor, as well as a number of bad ones, if nothing else know how to play, they have not lost the sense of make believe, the ability to imagine themselves as someone else. Of course there is a lot more to it than that; it is first a craft that can be learned like the craft of writing, or house painting, and it requires an apprenticeship of sorts where the tools of the trade are mastered. It is also an art and that cannot be taught any more than the art of painting, sculpture, or hitting baseballs successfully over the center field fence on a regular basis can be taught.

One premise of the theater is that it provides a glimpse into life as it is lived by others, that it is real and captures the reality of the moment. When an actor brings a character alive on stage she or he is said to be “in the moment.” It is what every actor strives for, “to be in the moment.” There is a lesson here for us all perhaps as life is a lot richer if we can find a way to embrace each moment and make the most of it, though, speaking for myself, there are many moments in life that are not easily embraced. Like cactus they are best experienced from afar.

Still, the actor is trying to make the moment real, to make it look like life as it is actually experienced. E. B. White once said (though I forget his exact words) not only does art not imitate life, it better be a hell of a lot more interesting than life. This does not mean that what art captures is not true to life only that much of life is very uninteresting and the artist selects the interesting bits and gets rid of the rest. We never, for example, see Hamlet cleaning up his room or doing the dishes. There is not much there to hold an audiences’ attention. And if there were a scene featuring Hamlet cleaning his room it would be what is happening to him as he goes about cleaning his room that keeps us interested. Like the scene where Polonius comes upon Hamlet reading. The interaction between Polonius and Hamlet holds the audience’s interest; a scene featuring a man quietly reading a book, not so much.

The theater group at school is doing a play that steals its title from an old Jack Nicholson film (Five Easy Pieces) and its plot from Othello with a dash of Finding Nemo. It is Othello as it might have happened if Othello and Iago were fish. It is called Five Easy Pisces. Being a lover of puns I am thrilled by the title. It was written by the group’s director, Don Bliss. There are few who will mistake the life in a fish bowl with life in the real world, but often it is the theater’s ability to remove us from the real world that provides some of its magic. Edward Albee’s Seascape involves crustaceans on the beach. Some of the most dramatic moments in Peter Schaeffer’s play Equus revolve around horses. Then there is, of course, The Lion King; music, dance, and political intrigue in the animal kingdom.

These plays are entertaining and a pleasure to watch. But what do they say to us about who we are and how to live from day to day. Is that the purpose of theater, or of any art? If not what is the purpose? Renaissance theaters in Europe (England did things a bit differently) tried to make the theater as true to life as possible. The stage design was intricate to the extreme. Often three sided panels would have each side painted with a different scene and by rotating each of the panels the scene could change from a city street to a room in the palace and each scene was painted in perspective to create the illusion of space and true architecture. There was, of course, only one seat in the house where the perspective was perfect for all the angles of vision and that of course went to the local monarch. The seat was in fact called “the eye of the duke.” 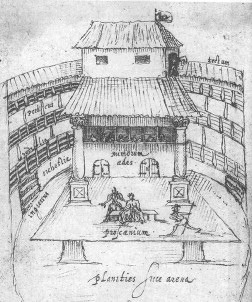 The English were different. They did not care if the play took a day or a number of years. As can be seen from the illustration their sets were much simpler. But the plays they produced at their best captured better than most the human psyche and its complications. Everyone says Shakespeare did it best, but Christopher Marlowe and Ben Jonson didn’t do too badly either. The point is that it is not the set design, it is not that the characters are like you and me, it is that for the moments the characters spend on stage a kind of life is being lived. We may not know what it feels like to be a fish in love or a lion with ambition beyond his station. But we have experienced love, jealousy, and ambition. Do we come away learning how to better deal with these shortcomings of the human character as a result of watching the play?

In Mr. Bliss’ play it is the fish tank’s filtration system that does the fish in, something that is not likely to worry most of us. But it is not the cause of the fish’s demise; it is the personal interactions that produce this cause that is the heart of the drama, and the comedy. These are struggles that are human, and perhaps the play offers insight. Or perhaps, the true nature of the play and of theater in general is to offer commiseration, a chance to say “and I thought I had it bad.”

From Slings and Arrows

As the director says “the whole thing falls apart if one of the actors is not good at pretending.” This is the heart of good theater. For a play to work well the cast must work as an ensemble. Each actor must be able to pretend well or the production falls apart no matter how good the rest of the cast may be. In order for the audience to enter this magic world a group of people must learn to work together and to play together well. If the work looks like work and not play the play does not work. If the pretending is not built upon something real it amounts to pretense and no one believes it. And it takes work to rise above pretense. There is, I think, a truth here for all of us. A key to living well is discovering how to put the play back into the work that we do, while maintaining the quality of the work that we do.

For the Greeks this was there religion. Once a year everyone went to the theater to learn something about how they should live, to be reminded that the gods are involved in our daily lives and the rich and the powerful cannot escape the will of the gods. Oedipus may be king but at the end of the day he is as answerable for his misdeeds as the slave that sets his table. That is the point of the catharsis at the end of the play. Bad news for Oedipus, but when put into perspective good news for the rest of us.

I had a professor in college that believed plays, even the plays of Shakespeare, should not be read as literature, as we read a poem or a novel, that plays are not literature. The only way a play can be experienced properly is by watching it performed. A play creates a bit of magic and it goes against the creed of the magician to reveal the secret of the trick. A play is multi-sensory and audiovisual. Lee Strasberg, one of the founders of the Actors Studio, said nothing of importance gets said in a play except for maybe five minutes in the last act (or words to that effect). Yet when we read a script all we have is the words that are spoken.

The magic of theater, and a reason we study plays and watch plays, is discovering what is happening behind the words. What motivates Hamlet to say what he says? What is the real life that lives under the words? Most of what we say in conversation is a kind of playing for time, filling the space with words while we try to figure out what the moment is all about. In watching characters on stage, or reading their words in the script, we realize that we are not alone in our struggle to find meaning in the day to day activities that fill our lives. Plays confront important issues but at the end of the day most of us are not concerned with how the powerful misuse their power or whatever the important issue of the play is. What does concern us is preserving the scent of the rose in our day to day experience while enjoying the coffee. It is not what happens to Hamlet and his family but how they persevere.