A Life of the Mind is the Heart of the Matter 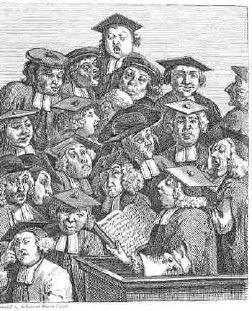 The lyric suggests that wisdom and education do not go together. It is true that the song is talking about a preacher being an educated fool if all she or he has to offer is book learning and nothing in the way of practical wisdom. While it is difficult to argue with practical wisdom, we all want to know what will succeed in making us happy and help us have a productive and contented life, it is not necessarily the case that practical wisdom and book learning share no common ground.

William Hogarth’s engraving captures the common perception of the well educated. There is a group of scholars listening to another scholar giving a lecture. Some are talking while the lecturer is speaking; others are yawning and drifting off to sleep, while the remainder stare somewhat blankly at the speaker. A few are paying real attention, but very few. The implication is that what the lecturer has to say is of little value to anyone and even his colleagues do not take him seriously. As a classroom teacher I recognize this scene, it is frequently acted out in my classroom. I wonder where the problem is in fact, is it with the lecturer or with the audience?

It is probably with both. No two people have identical interests and even those that share many of the scholar’s interests are going to find some less than compelling and as a result there will be times when the minds of like minded colleagues will wander. This is often further complicated in the classrooms by students that lack the life experience necessary to understand fully what is and is not of value in the curriculum they are being encouraged to master.

Add to this that most of the students in any of my classes, even the most advanced classes, are going to pursue careers unrelated to what I teach. This is not because English is less important than math or science but because statistically the academic interests of my students are spread somewhat equally across the academic disciplines of which English is only one of five or six. It is important that those with a scientific bent are exposed to poetry and the arts, not because this will produce better scientists but because there is more to life than science and our lives are richer if they are not confined to a narrow band of interests. Of course it is also important that scientist write clearly and articulately about what they have discovered. I am not sure that Darwin and Freud understood most deeply and completely the sciences they helped to establish but only that they could write more persuasively than others about what they found.

There are two statements that I often come back to when I think of education and the value of educating the mind. The first takes a comic view of education and comes from a book called Nightmare Abbey by Thomas Love Peacock. The book is a satire on the lives and views of the Romantic poets of his generation. The central character is named Scythrop who is modeled on Peacock’s friend the poet Percy Bysshe Shelley. He says of Scythrop’s schooling:

“When Scythrop grew up, he was sent, as usual, to a public school, where a little learning was painfully beaten into him, and from thence to the university, where it was carefully taken out of him; and he was sent home like a well-threshed ear of corn, with nothing in his head.”

I think this reflects a view of education that is prevalent today, that it is a nice thing to have, but in the end is not that important. We have embraced an egalitarian view of education that values common knowledge or common sense to a richly and deeply trained mind. On the one hand political leaders will talk about the importance of math and science while on the other proposing budgets that do not add up and trying to silence the science with which they disagree.

The other quote is from a book that is appreciated by a very select few (not because it is a book only a few are smart enough to appreciate but because only a few have a taste for this style of writing). It comes from Robert Burton’s Anatomy of Melancholy. Burton thought that educators as a group belonged the to the race of melancholics. He lived at a time where everyone was placed in one of four personality groups based on the ” four humours”, or the four fluids that flow through the human body that shape a person’s temperament. The ideal is to have all four fluids in balance, which in turn puts the mind and emotions in balance. But most have a fluid that dominates. Melancholy was produced by the presence black bile in an unhealthy proportion to the other fluids, blood, phlegm, and yellow bile. Now you all are on your way to becoming medieval physicians. 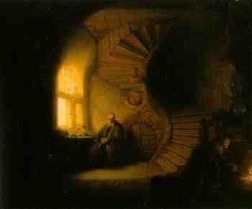 Burton was himself an educator and scholar and was himself of a melancholy temperament. Perhaps the melancholic nature of scholars was aggravated by the fact that to be a scholar and teacher, especially at the university level, you were expected to live the celibate life of the monastic. Too much time spent in our own company can make us all a bit dour. Burton said of educators:

“For first, not one of a many proves to be a scholar, all are not capable and docile; we can make majors and officers every year, but not scholars: kings can invest knights and barons, as Sigismund the emperor confessed; universities can give degrees; but he nor they, nor all the world can give learning, make philosophers, artists, orators, poets; we can soon say, as Seneca well notes, ”point at a rich man, a good, a happy man, a prosperous man, but tis not so easily performed to find out a learned man.”

This captures the essence of what it means to be truly learned with a heart for scholarship. The scholastic temperament comes from within and cannot be given with degrees or diplomas. It is a frame of mind that does not use knowledge to gain advantages over others but delights in the acquiring and the preserving of it.

Mr. Chips is probably everyone from my generation’s favorite teacher. After reading James Hilton’s novel Lost Horizons we we went on to read his other famous novel Goodbye Mr. Chips. He is a good teacher with a heart for developing the potential of all his students. In this scene he is working with a scholarship boy, that is, a boy from a poor family that could not afford to educate their children. Because of the academic potential seen in the boy he was given a scholarship that paid his way through school. But most of the students in the school come from wealthy families that could afford to pay for their children’s education. Because the scholarship boy came from a different social class from the rest of the students he was often ridiculed and his academic road was often brutal. I like Mr. Chips’ argument for getting an education in spite of the difficulties encountered along the way and think this should be a part of the academic make-up of all students (though it goes without saying that all students do not have this passion for learning).

The book review section of The Guardian published a series of articles on the 1,000 Novels Everyone Must Read. This is a very diverse list taking into account most of the genres of popular fiction. The writers range from Danielle Steele and Ian Fleming to Leo Tolstoy and William Faulkner. There is something for everyone. I would like to propose an addendum to the list of books about scholars and scholarship. These are books that put academics at the center of the story and celebrates their quirks, eccentricities, and humanity. This is not an exhaustive list, just my list.

The Book and the Academician

Well this is enough to get you started. The list includes science fiction, detective, and coming of age type novels. But at the heart of each of them is an academic setting and an attitude toward learning that colors the story. The life of the true scholar is characterized by a passion for learning, she or he trains the mind to satisfy the heart.