Those that like the music of Beethoven, or progressive jazz, may not like Chuck Berry’s “Roll Over Beethoven.” The artistry that Berry aspires to is not the same artistry that Beethoven aspired to and those that find art in Beethoven may deny that it is to be found in Chuck Berry’s song. Others find great artistry in the song, the magazine Rolling Stone ranked the song 97th in their list of the five hundred greatest songs of all time (of course there is a facetiousness in the label “all time” unless time began somewhere in the 1950’s). 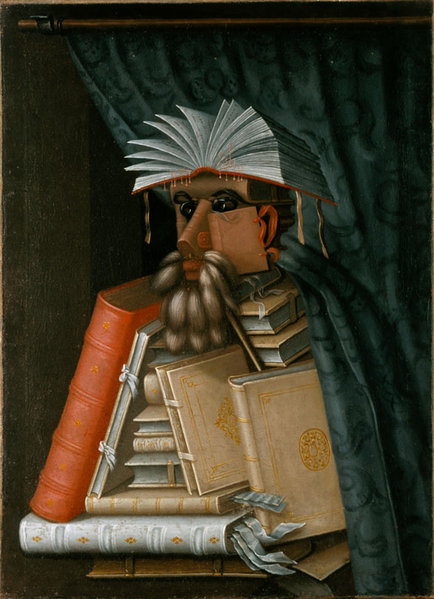 The painting is of a man, a librarian, made of books and for me it captures the essence of the bibliophile. A person so in love with literature that books form the very essence of his being. Trying to teach classic literature to young adults, on the other hand, has always been difficult and it seems to get more difficult as time goes by. Books for these young people are not intimately woven into the fiber of their being. I was born in 1949. When I was born books had only radio and the movies to compete with and it was not long before that when there was even less competition. Books were a popular form of entertainment for much of modern history because reading and playing a musical instrument were about the only forms of entertainment available that could be done without others to play along. This is probably an oversimplification, there were no doubt other ways people amused themselves, but the written word had it much easier in the competition for discretionary time.

Nor are television and movies the only competition with which the book must compete. The book is also at something of disadvantage because reading is a difficult pastime to pursue passively. But is the canon concerned with books that are read for entertainment. It is unlikely that a book that fails to entertain will survive long enough to find its way into the canon, but for a book to find a place in the canon that book must probably do more than just entertain. And it is that something else that is studied in literature classes and it is also that something else that holds little interest for students (or for many of their parents I suppose).

Jonathan Lethem in this Sunday’s (11/09) New York Times reviews a new book by Roberto Bolano, 2666 (it also included the Arcimboldo painting of the Librarian). The review is entitled “The Departed” and begins with a reflection on the nature of art, especially literary art and whether it is possible for flawed human beings to produce something perfect enough to be called art. He points out that there is much that is wrong with the books that are labeled great, in part because of the inherent ambiguity of language and in part because of the imperfection of the human character. But perhaps that is part of the greatness of literature in that it showcases the human psyche at odds with an imperfect world and other imperfect people. If nothing else they can provide models for how to live in a broken world. Though there is still the problem of what imperfect human authors consider “proper behavior.”

Henry Bemis in this Twilight Zone episode is a man with a passion for books. He reads with enthusiasm even when he ought to be doing other things and this gets him in a bit of trouble. He cannot read at work and he cannot read at home. There are few in his life who share his enthusiasm. There is also the problem of his passive acquiescence to everyone who criticizes him primarily because he wastes so much of his time reading. It is a stereotype of the bookish person out of touch with the world and incapable of functioning in social situations. I think this is the first stereotype that must somehow be addressed if reading is to retain a place of prominence in the culture.

I think we read books because they are by and about imperfect human beings. It cannot be overlooked that many writers project views and attitudes that are troubling and these views must be shown for what they are. But often these views reflect the times in which the author lived and are surrounded by other attitudes that challenge what is wrong with those times. Dickens’ portrayal of Victorian society in Oliver Twist confronts much that is wrong with the treatment of the poor, especially poor children by that society. But then there is also the Anti-Semitism found in the depiction of Fagin. Should works like this be abandoned and replaced with others that do not get some things so glaringly wrong. Is it possible to produce a book that does not get it glaringly wrong? That which replaces the works removed from the canon will be shown over time to have flaws that are as bad or worse.

Perhaps the real issue is the necessity of a canon at all. Are great books and the reading of them an out of date exercise? Is it necessary to expose the young people of today to Charles Dickens or Homer or Cervantes or Shakespeare? Emerson believed we studied the past and the literature of the past in order to better understand our present and more importantly to better understand ourselves.

A proper understanding of history does not involve remembering key dates and events but understanding the people that shaped those events and the forces inside of them that motivated their actions. There is little value to knowing that Washington led the forces of the American Revolution. There may be something to be learned, though, in trying to understand what led him to take on such a task as there would be value in trying to understand why a king in a country many thousands of miles away (and a journey of some months) would try to force his will so stridently on a people that he aroused such a fierce resistance. There is also a value to confronting or encouraging as the case may be, those motivations when we find them in ourselves. We cannot confront them if we have not first been taught how to identify them.

There need not be a conflict, to return to the initial point, between Beethoven and his admirers and Chuck Berry and those that admire him. In fact there are many that reside in both camps. The same may be true of books. The books of the past still have power to move and influence those that read them. The problem perhaps lies in trying to force on those we teach the terms by which those books are read. I do not read for the same reasons as my students. What moves and motivates me probably does not move or motivate them. The problem is often that I am trying to get them to look at a book that does not interest them while employing a way of reading and a point of view that is to them irrelevant. The book has to ignite a spark within the reader if it is to come to life within that reader and that spark is unique for each of us.

But on the other hand reading a book seriously and closely with an eye to the little things that work so well within it is a skill and a craft that must be learned and it is learned in part by following the journey through a book that another has taken. Before Emerson could apply the lessons of literature to his own life someone had to show him what lies beneath the surface of plot, or if in fact anything does lives beneath that surface. I don’t try to teach students to look at a book the way I look at a book because I want them to read like me but because I want to give them the tools to read profoundly for themselves. All I can do is take them down the path I have traveled and point out some of the things I have noticed and hope that at some point along the way they will take off on a path of their own making.

In describing King Arthur’s knights as they went off in search of the grail Sir Thomas Malory says, “And so on the morn they were all accorded that they should depart everyone from the other; and on the morn they departed with weeping cheer, and every knight took the way that he liked best.” They all left the castle using the same road, but disappeared at different times and places into the woods to pursue their own unique path. That is perhaps what we all must do both in the way we read and the way we live our lives.

One thought on “Aiming the Canon – Studying Words of Art”